For the theatre in Liverpool, see Royal Court Theatre, Liverpool.

The Royal Court Theatre, at different times known as the Court Theatre, the New Chelsea Theatre, and the Belgravia Theatre, is a non-commercial West End theatre in Sloane Square, in the Royal Borough of Kensington and Chelsea, London, England. In 1956 it was acquired by and remains the home of the English Stage Company and is notable for its contributions to contemporary theatre.

The first theatre on Lower George Street, off Sloane Square, was the converted Nonconformist Ranelagh Chapel, opened as a theatre in 1870 under the name The New Chelsea Theatre. Marie Litton became its manager in 1871, hiring Walter Emden to remodel the interior, and it was renamed the Court Theatre.[a] 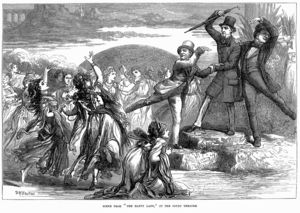 Scene from The Happy Land, showing the scandalous impersonation of Gladstone, Lowe, and Ayrton

Several of W. S. Gilbert's early plays were staged here, including Randall's Thumb, Creatures of Impulse (with music by Alberto Randegger), Great Expectations (adapted from the Dickens novel), and On Guard (all in 1871); The Happy Land (1873, with Gilbert Abbott à Beckett; Gilbert's most controversial play); The Wedding March, translated from Un Chapeau de Paille d'Italie by Eugène Marin Labiche (1873); The Blue-Legged Lady, translated from La Dame aux Jambes d'Azur by Labiche and Marc-Michel (1874); and Broken Hearts (1875). By 1878, management of the theatre was shared by John Hare and W. H. Kendal.[1]

Further alterations were made in 1882 by Alexander Peebles, after which its capacity was 728 (including stalls and boxes, dress circle and balcony, amphitheatre, and gallery).[2] After that, Arthur Cecil (who had joined the theatre's company in 1881) was co-manager of the theatre with John Clayton.[3] Among other works, they produced a series of Arthur Wing Pinero's farces, including The Rector, The Magistrate (1885), The Schoolmistress (1886), and Dandy Dick (1887), among others.[4] The theatre closed on 22 July 1887 and was demolished.[5]

The present building was built on the east side of Sloane Square, replacing the earlier building, and opened on 24 September 1888 as the New Court Theatre. Designed by Walter Emden and Bertie Crewe, it is constructed of fine red brick, moulded brick, and a stone facade in free Italianate style. Originally the theatre had a capacity of 841 in the stalls, dress circle, amphitheatre, and a gallery.

Cecil and Clayton yielded management of the theatre to Mrs. John Wood and Arthur Chudleigh in 1887, although Cecil continued acting in their company (and others) until 1895.[3] The first production in the new building was a play by Sydney Grundy titled Mamma, starring Mrs. John Wood and John Hare, with Arthur Cecil and Eric Lewis.[6] By the end of the century, the theatre was again called the "Royal Court Theatre".[7]

Harley Granville-Barker managed the theatre for the first few years of the 20th century, and George Bernard Shaw's plays were produced at the New Court for a period. It ceased to be used as a theatre in 1932, but was used as a cinema from 1935 to 1940, until World War II bomb damage closed it.[2]

The interior was reconstructed by Robert Cromie, and the number of seats was reduced to under 500. The theatre re-opened in 1952.[8] George Devine was appointed artistic director at the suggestion of Oscar Lewenstein, one of the founders of the English Stage Company. Greville Poke, another co-founder was appointed Honorary Secretary of the ESC in October 1954.[9] The ESC opened at the Royal Court in 1956 as a subsidised theatre producing new British and foreign plays, together with some classical revivals.[10] Devine aimed to create a writers' theatre, seeking to discover new writers and produce serious contemporary works. Devine produced the new company's third production in 1956, John Osborne's Look Back in Anger, a play by one of the angry young men. The director was Tony Richardson. Osborne followed Look Back in Anger with The Entertainer, with Laurence Olivier in the lead as Archie Rice, a play the actor effectively commissioned from the playwright. The artistic board of the ESC initially rejected the play, although they soon reversed that decision. Two members of the board opposed The Entertainer: the verse dramatist Ronald Duncan, the third co-founder of the ESC, disliked Osborne's work, according to the biographer John Heilpern;[11][b] while Lewenstein, a former Communist,[13] did not want one of the theatre's new plays to be overwhelmed by its star and did not think much of the play.[11]

In the mid-1960s, the ESC became involved in issues of censorship. Their premiere productions of Osborne's A Patriot for Me and Saved by Edward Bond (both 1965) necessitated the theatre turning itself into a 'private members club' to circumvent the Lord Chamberlain, formally responsible for the licensing of plays until the Theatres Act 1968. The succès de scandale of the two plays helped to bring about the abolition of theatre censorship in the UK.[citation needed] During the period of Devine's directorship, besides Osborne and Bond, the Royal Court premiered works by Arnold Wesker, John Arden, Ann Jellicoe and N.F. Simpson. Subsequent Artistic Directors of the Royal Court premiered work by Christopher Hampton, Athol Fugard, Howard Brenton, Caryl Churchill, Hanif Kureishi, Sarah Daniels, Errol John, Timberlake Wertenbaker, Martin Crimp, Sarah Kane, Sylvia Wynter, Mark Ravenhill, Martin McDonagh, Simon Stephens, Leo Butler, Polly Stenham and Nick Payne. Early seasons included new international plays by Bertolt Brecht, Eugène Ionesco, Samuel Beckett, Jean-Paul Sartre, and Marguerite Duras. In addition to the 400-seat proscenium arch Theatre Downstairs, the much smaller studio Theatre Upstairs was opened in 1969, at the time a 63-seat facility.[2][14] The Rocky Horror Show premiered there in 1973. The theatre was Grade II listed in June 1972.[15] 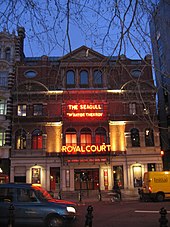 The Royal Court Theatre at dusk in 2007

Though the main auditorium and the façade were attractive, the remainder of the building provided poor facilities for both audience and performers, and throughout the 20th century the stalls and understage often flooded. By the early 1990s the theatre had deteriorated dangerously, and it was threatened with closure in 1995. The Royal Court received a grant of £16.2 million from the National Lottery and the Arts Council for redevelopment, and beginning in 1996, under the artistic directorship of Stephen Daldry, it was completely rebuilt, except for the façade and the intimate auditorium. The architects for this were Haworth Tompkins. The theatre reopened in February 2000, with the 380-seat Jerwood Theatre Downstairs, and the 85-seat studio theatre, now the Jerwood Theatre Upstairs. Since 1994, a new generation of playwrights debuting at the theatre has included Joe Penhall, Sarah Kane, Mark Ravenhill, and Roy Williams, among others.[citation needed] Since the 1990s the Royal Court has placed an emphasis on the development and production of international plays. By 1993, the British Council had begun its support of the International Residency programme (which started in 1989 as the Royal Court International Summer School), and more recently the Genesis Foundation has also supported the production of international plays. The theatre received a 1999 International Theatre Institute award.[16] In May 2008 The English Stage Company presented The Ugly One by Marius von Mayenburg at the "Contact International Theatre Festival" in Poland.[17]

Caryl Churchill's play Seven Jewish Children played at the theatre in 2009. Many Jewish leaders and journalists criticised the play as antisemitic.[21][22][23][24] One called it "a libellous and despicable demonisation of Israeli parents and grandparents" and a modern blood libel drawing on old anti-Semitic myths.[21] Michael Billington in The Guardian described the play as "a heartfelt lamentation for the future generations".[25] The paper contended that the play, though controversial, is not antisemitic,[26] yet Seven Jewish Children was viewed by another Guardian writer as historically inaccurate and harshly critical of Jews.[27] In reply, the Royal Court issued the following statement:

Some concerns have been raised that the Royal Court's production of Seven Jewish Children ... is anti-Semitic. We categorically reject that accusation.... While [it] is undoubtedly critical of the policies of the state of Israel, there is no suggestion that this should be read as a criticism of Jewish people.... In keeping with its philosophy, the Royal Court Theatre presents a multiplicity of viewpoints.[28]

Notable productions since the 1950s