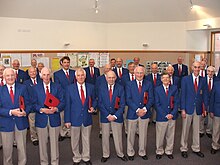 The Choir's origins can be traced back to 1878 and the entertainment provided at functions marking the opening of the northern railway link into Dunedin. From this evolved a Liedertaefel Quartet which, in response to public demand, was to become the Dunedin Liedertaefel Society which was incorporated on 1 May 1886. Its aims were stated as "the practice and performance of music for male voices, and for the cultivation of a refined taste in that class of music". Its founder was Mr. S. Moyle.[1]

The Royal Dunedin Male Choir from time to time combined with the Dunedin Choral Society (City of Dunedin Choir) in performances.[3]

Audiences have included these notable persons:

The Choir's constitution stipulates the Mayor of Dunedin is their patron.

The Royal Dunedin Male Choir has been led and inspired by many musical directors and conductors.

The choir has been well served by 27 pianists since 1886 and, coming forward in time, have included: Edward Taylor, Chas Martin, Colin Oliver, Iain Kerr, Judy Faris (née Galloway) with a record 27 years service, and from 1994 to the present, Linda Folland (née Kydd).

Membership of the Royal Dunedin Male Choir is open to male singers from all walks of life who share a common delight in choral singing.

The choir comprises four sectional groups; First Tenors, Second Tenors (or Leads), First Basses (or Baritones) and Second Basses. Following a successful audition the Musical Director will assigns a singer to one of these sections based on his assessment of the singer's vocal range.

Over the past 122 years the choir has been in existence it has sung a huge array of different music styles and genres. The list is far too long to display here but has included traditional hymns such as "The 23rd Psalm", Spirituals the likes of "I'm Gwine to Sing" and "Kentucky Babe", and songs from the popular operatic musicals like Phantom Of the Opera, Porgy and Bess, Oklahoma, and My Fair Lady.

The choir also enjoys singing the big heart-warming songs such as "Gwahoddiad", "American Trilogy" and "And the Glory of the Lord" (from Handel's Messiah).

The choir stages two major concerts in the Dunedin Town Hall each year: one around mid-year (June) and a Christmas Concert in early December.

The archives of the Royal Dunedin Male Choir are held in the Hocken Collections, Dunedin, New Zealand