Ruanda-Urundi[a] (French pronunciation: ​[ʁɥɑ̃da.yʁœ̃di]) was a territory in the African Great Lakes region, once part of German East Africa, which was ruled by Belgium between 1922 and 1962. Occupied by the Belgians during the East African campaign of World War I, the territory was under military occupation from 1916 to 1922 and later became a Belgian-controlled Class-B Mandate under the League of Nations from 1922 to 1945. It was replaced by Trust Territory status under the auspices of the United Nations in the aftermath of World War II and the dissolution of the League but remained under Belgian control. Ruanda-Urundi was granted independence in 1962 as the two separate states of Rwanda and Burundi.

Ruanda and Burundi were two independent kingdoms in the Great Lakes region before the Scramble for Africa. In 1894, they were annexed by the German Empire and eventually became two districts of German East Africa. The two monarchies were retained as part of the German policy of indirect rule, with the Ruandan king (mwami) Yuhi V Musinga using German support to consolidate his control over subordinate chiefs in exchange for labour and resources.[1] 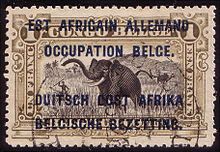 World War I broke out in 1914. German colonies were originally meant to preserve their neutrality as mandated in the Berlin Convention, but fighting soon broke out on the frontier between German East Africa and the Belgian Congo around Lakes Kivu and Tanganyika.[1] As part of the Allied East African Campaign, Ruanda and Urundi were invaded by a Belgian force in 1916.[1] The German forces in the region were small and hugely outnumbered. Ruanda was occupied over April–May and Urundi in June 1916. By September, a large portion of German East Africa was under Belgian occupation reaching as far south as Kigoma and Karema and as far eastwards as Tabora in modern-day Tanzania.[1] In Ruanda and Urundi, the Belgians were welcomed by some civilians, who were opposed to the autocratic behaviour of the kings.[1] The territory captured was administered by a Belgian military occupation authority ("Belgian Occupied East African Territories") pending an ultimate decision about its political future. An administration, headed by a Royal Commissioner, was established in February 1917 at the same time as Belgian forces were ordered to withdraw from the Tabora region by the British. 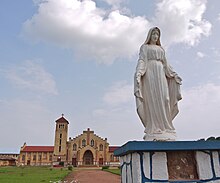 The Cathedral of Our Lady of Wisdom at Butare (formally Astrida) in Ruanda. Catholicism expanded rapidly under the Belgian mandate.

The Treaty of Versailles in the aftermath of World War I divided the German colonial empire among the Allied nations. German East Africa was partitioned, with Tanganyika allocated to the British and a small area allocated to Portugal. Belgium was allocated Ruanda-Urundi even though this represented only a fraction of the territories already occupied by the Belgian forces in East Africa. Belgian diplomats had originally hoped that Belgian claims in the region could be traded for Portuguese territory in Angola to expand the Congo's access to the Atlantic Ocean but this proved impossible. The League of Nations officially awarded Ruanda-Urundi to Belgium as a B-Class Mandate on 20 July 1922. The mandatory regime was also controversial in Belgium and it was not approved by Belgium's parliament until 1924.[2] Unlike colonies which belonged to its colonial power, a mandate was theoretically subject to international oversight through the League's Permanent Mandates Commission (PMC) in Geneva, Switzerland.[citation needed] Administratively, the mandate was divided into two pays, Ruanda and Urundi, each under the nominal leadership of a Mwami. The city of Usumbura and its adjoining townships were classified separately as centres extracoutumiers, while the pays were subdivided into territories.[3]

After a period of inertia, the Belgian administration became actively involved in Ruanda-Urundi between 1926 and 1931 under the governorship of Charles Voisin. The reforms produced a dense road-network and improved agriculture, with the emergence of cash crop farming in cotton and coffee.[4] However, four major famines did ravage parts of the mandate after crop failures in 1916–1918, 1924–26, 1928–30 and 1943–44. The Belgians were far more involved in the territory than the Germans, especially in Ruanda. Despite the mandate rules that the Belgians had to develop the territories and prepare them for independence, the economic policy practised in the Belgian Congo was exported eastwards: the Belgians demanded that the territories earn profits for the motherland and that any development must come out of funds gathered in the territory. These funds mostly came from the extensive cultivation of coffee in the region's rich volcanic soils.[citation needed] 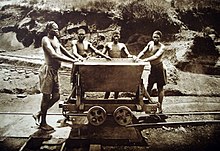 Ruandan labour migrants at the Kisanga copper mine in Katanga (Belgian Congo) in c. 1930

To implement their vision, the Belgians extended and consolidated a power structure based on indigenous institutions. In practice, they developed a Tutsi ruling class to formally control a mostly Hutu population, through the system of chiefs and sub-chiefs under the overall rule of the two Mwami. Contemporary racial science and eugenics led Belgian administrators believed that the Tutsi were genetically more closely related to Europeans than the Hutu superior and deserved power. Some scholars circulated, including John Hanning Speke, propagated the Hamitic hypothesis which held that the Tutsi were descended from "black Caucasians" who invaded Europe and were the ancestors of all the more "civilised" African peoples.[5] While before colonization the Hutu had played some role in governance, the Belgians simplified matters by further stratifying the society on ethnic lines. Hutu anger at the Tutsi domination was largely focused on the Tutsi elite rather than the distant colonial power.[6] Musinga was deposed by the administration as mwami of Ruanda in November 1931 after being accused of disloyalty.[7] He was replaced by his son Mutara III Rudahigwa.

Although promising the League it would promote education, Belgium left the task to subsidised Catholic missions and mostly unsubsidised Protestant missions. Catholicism expanded rapidly through the African population in consequence. An elite secondary school, the Groupe Scolaire d'Astrida was established in 1929 but as late as 1961, shortly before independence arrived, fewer than 100 Africans had been educated beyond the secondary level.[citation needed] The policy was one of low-cost paternalism, as explained by Belgium's special representative to the Trusteeship Council: "The real work is to change the African in his essence, to transform his soul, [and] to do that one must love him and enjoy having daily contact with him. He must be cured of his thoughtlessness, he must accustom himself to living in society, he must overcome his inertia."[8] 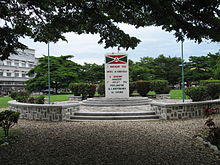 The League of Nations was formally dissolved in April 1946, following its failure to prevent World War II. It was succeeded, for practical purposes, by the new United Nations (UN). In December 1946, the new body voted to end the mandate over Ruanda-Urundi and replace it with the new status of "Trust Territory". To provide oversight, the PMC was superseded by the United Nations Trusteeship Council. The transition was accompanied by a promise that the Belgians would prepare the territory for independence, but the Belgians felt the area would take many decades to be ready for self-rule and wanted the process to take enough time before happening.

Independence came largely as a result of actions elsewhere. African anti-colonial nationalism emerged in the Belgian Congo in the late 1950s and the Belgians became convinced they could no longer control the territory. Unrest also broke out in Ruanda where the monarchy was deposed in the Rwandan Revolution (1959–1961). Grégoire Kayibanda led the dominant and ethnically defined Party of the Hutu Emancipation Movement (Parti du Mouvement de l'Emancipation Hutu, PARMEHUTU) in Rwanda while the equivalent Union for National Progress (Union pour le Progrès national, UPRONA) in Burundi attempted to balance competing Hutu and Tutsi ethnic claims. The independence of the Belgian Congo in June 1960 and the accompanying period of political instability further drove nationalism in Ruanda-Urundi and the assassination of the UPRONA leader Louis Rwagasore, also Burundi's crown prince, in October 1961 did not halt the movement. After hurried preparations, Ruanda-Urundi became independent on 1 July 1962, broken up along traditional lines as the independent Republic of Rwanda and Kingdom of Burundi. It took two more years before the government of the two became wholly separate.