The Solar Hijri calendar (Persian: گاه‌شماری هجری خورشیدی‎, romanized: gāhshomāri-ye hejri-ye khorshidi; Pashto: لمريز لېږدیز کلیز‎), also called the Iranian Hijri calendar[1] or Shamsi Hijri calendar, and abbreviated as SH and, sometimes, HS, is the official calendar of Iran and Afghanistan. It begins on the March equinox (Nowruz) as determined by astronomical calculation for the Iran Standard Time meridian (52.5°E, UTC+03:30) and has years of 365 or 366 days.

Its determination of the start of each year is astronomically accurate year-to-year as opposed to the more fixed Gregorian or Common Era calendar which, averaged out, has the same year length, achieving the same accuracy (a more simply patterned calendar of 365 days for three consecutive years plus an extra day in the next year, save for exceptions to the latter in three out of every four centuries). The start of the year and its number of days remain fixed to one of the two equinoxes, the astronomically important days when day and night each have the same duration. It results in less variability of all celestial bodies when comparing a specific calendar date from one year to others.[2]

Each of the twelve months corresponds with a zodiac sign. The first six months have 31 days, the next five have 30 days, and the last month has 29 days in usual years but 30 days in leap years. The Iranian New Year's Day always falls on the March equinox. 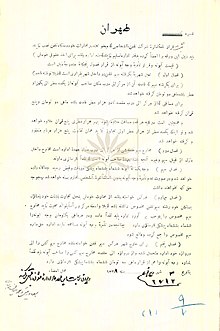 A Persian-language contract published in Tehran on April 14, 1910 which used Lunar Hijri calendar.

On 21 February 1911, the second Iranian parliament adopted as the official calendar of Iran the Jalali sidereal calendar with months bearing the names of the twelve constellations of the zodiac and the years named for the animals of the duodecennial cycle; it remained in use until 1925.[1] The present Iranian calendar was legally adopted on 31 March 1925, under the early Pahlavi dynasty. The law said that the first day of the year should be the first day of spring in "the true solar year", "as it has been" ever so. It also fixed the number of days in each month, which previously varied by year with the sidereal zodiac. It revived the ancient Persian names, which are still used. It specified the origin of the calendar to be the Hegira of Muhammad from Mecca to Medina in 622 CE.[3] It also deprecated the 12-year cycles of the Chinese-Uighur calendar, which were not officially sanctioned but were commonly used.

In 1975,[1] Shah Mohammad Reza Pahlavi changed the origin of the calendar to the beginning of Cyrus the Great's reign as its first year, rather than the Hejra of Muhammad. Overnight, the year changed from 1355 to 2535. The change lasted until the Iranian revolution in 1979, at which time the calendar reverted to Solar Hijri.[4]

Details of the modern calendar

The first six months (Farvardin–Shahrivar) have 31 days, the next five (Mehr–Bahman) have 30 days, and the last month (Esfand) has 29 days in common years or 30 days in leap years. This is a simplification of the Jalali calendar, in which the commencement of the month is tied to the sun's passage from one zodiacal sign to the next. The sun is travelling fastest through the signs in early January (Dey) and slowest in early July (Tir). The current time between the March and September equinoxes is about 186 days and 10 hours, the opposite duration about 178 days, 20 hours.

The Solar Hijri calendar produces a five-year leap year interval after about every seven four-year leap year intervals. It usually follows a 33-year subcycle with occasional interruptions by a single 29-year subcycle, or rarely a 37-year subcycle. The reason for this behaviour is (as explained above) that it tracks the observed vernal equinox. By contrast, some less accurate predictive algorithms are suggested based on confusion between the average tropical year (365.2422 days, approximated with 29-year, 33-year, and 37-year subcycles grouped into 128-year and 132-year cycles and 2820-year great cycles) and the mean interval between spring equinoxes (365.2424 days, approximated with a near 33-year cycle).

The first day of the calendar year, Nowruz ("New Day"), is the greatest festival of the year in Iran, Afghanistan, and some surrounding regions. The celebration is filled with many festivities and runs a course of 13 days, the last day of which is called siz-dah bedar ("13 to outdoor").

The Dari (Afghan Persian) month names are the signs of Zodiac. They were used in Iran in the early 20th century when the solar calendar was being used.

Days of the week

In the Iranian calendar, every week begins on Saturday and ends on Friday. The names of the days of the week are as follows: shambe (natively spelled "shanbeh", شنبه), yekshambe, doshambe, seshambe, chæharshambe, panjshambe and jom'e (yek, do, se, chæhar, and panj are the Persian words for the numbers one through five). The name for Friday, jom'e, is Arabic (جمعه). Jom'e is sometimes referred to by the native Persian name, adineh [ɒːdiːne] (آدینه). In some Islamic countries, Friday is the weekly holiday.

As in the Gregorian calendar, dates move forward exactly one day of the week with each passing year, except if there is an intervening leap day when they move two days. The anchor date 1 Farvardin 1372 is chosen so that its 4th, 8th, ..., 32nd anniversaries come immediately after leap days, yet the anchor date itself does not immediately follow a leap day.

The Solar Hijri (Persian) calendar is one of the oldest calendars in the world, as well as the most accurate solar calendar in use today. Since the calendar uses astronomical calculation for determining the vernal equinox, it has no intrinsic error.[7][8][9][10] 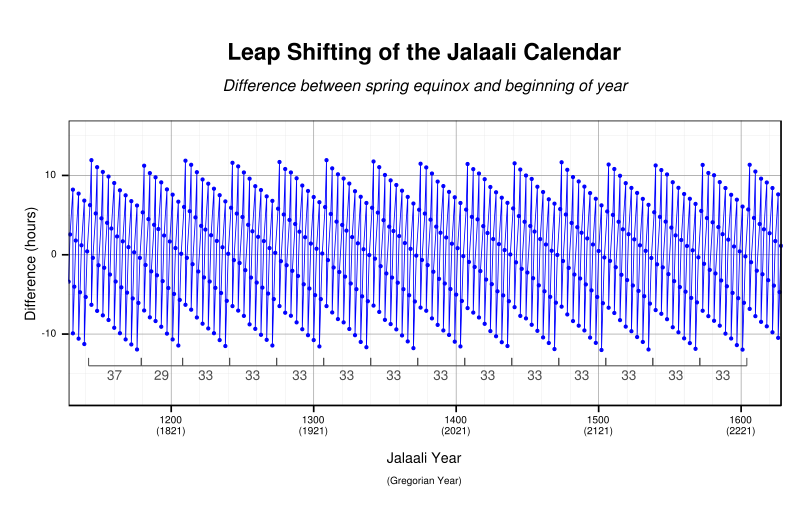 Iranian mathematician Ahmad Birashk (1907-2002) proposed an alternative means of determining leap years. Birashk's book came out in 1993, and his algorithm was based on the same apparently erroneous presumptions as used by Zabih Behruz in his book from 1952.[2] Birashk's technique avoids the need to determine the moment of the astronomical equinox, replacing it with a very complex leap year structure. Years are grouped into cycles which begin with four normal years, after which every fourth subsequent year in the cycle is a leap year. Cycles are grouped into grand cycles of either 128 years (composed of cycles of 29, 33, 33, and 33 years) or 132 years, containing cycles of 29, 33, 33, and 37 years. A great grand cycle is composed of 21 consecutive 128-year grand cycles and a final 132 grand cycle, for a total of 2820 years. The pattern of normal and leap years which began in 1925, will not repeat until the year 4745.

Accuracy of the Birashk algorithm

The accuracy of the system proposed by Birashk and other recent authors, such as Zabih Behruz, has been thoroughly refuted and shown to be less precise than the traditional 33-year cycle.[2]