Stavangerflint AS was an earthenware factory that was in operation from 1949 until 1979 in Stavanger, Norway.[1]

Production of pottery tableware for households and for the professional market started in 1949 under the name of Stavanger Fajansefabrikk A/S . The initiators, Trygve Brekke (1908–1994) and Trygve Pedersen (1887-1969) took as their starting point the market conditions and needs resulting from inter-war imports of ceramic tableware, the war and post-war shortage of goods, and expectations for a growing domestic demand as the country gradually recovered, and as retail purchasing power grew. Stavanger Fajansefabrikk aimed from the start for a clay mixture and manufacturing process which was to be marketed as Stavangerflint, based on a recipe developed by Josiah Wedgwood in England around 1750. This was a marketable name which had the aim of presenting the factory's products as strong and durable earthenware.[2][3] 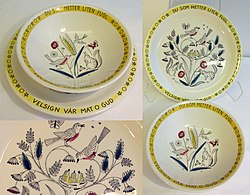 During its 19 years as an independent company, Stavangerflint had three artistic directors: Thorbjørn Feyling (1949-1955), Eystein Sandnes (1955-1957) and Kåre Berven Fjeldsaa (1958-1968). In 1963 Sigurd Jensen (1919-2000) succeeded Trygve Brekke as managing director. Sigurd Jensen had been Commercial Director and second in command at Stavangerflint from the start. Jensen was to play an important role as the driving force in the processes which led to the amalgamation of Stavangerflint AS and Figgjo Fajanse AS. The new company continued production at the old premises as two branches and the goods had their old markings which were identical to the original factory names.

An important source for information about what was produced in the potteries in Rogaland is the Internet auction sites and shops which sell the factories’ goods. Signed works by Turi Gramstad Oliver, Kari Nyquist, Gro Pedersen Claussen, Anne Lofthus and Inger Waage are among those who have created great interest among collectors, both national and international. Because many of the products were exported, they are collectables found on international Net auction sites.[6]