Everts was born in Bree, Belgium as the son of four-time motocross world champion, Harry Everts. He began riding motorcycles at the age of four. At the age of 17, he made his debut in the 125cc World Championship, and two years later he secured his first title in that division. During the following years, the Belgian moved up through the different divisions and collected an as yet unsurpassed number of World Championship titles (10) and GP victories (101).[3]

Everts was known for his very smooth style on the bike, making his riding look effortless. In particular, he maintained a standing position on the bike much more frequently than other riders, even in very tight corners. His cornering control was unique and he was noted for running his engine in a higher gear to torque his way around the track, as opposed to revving it out hard in each gear, even on the 125cc and 250cc two-stroke machines he used at the beginning of his career. While he never placed much focus on American-style supercross tracks or riding styles, he nevertheless proved to be competitive with top US riders even at their own game. In the later stages of his career, Everts' vast experience helped him to reach an impressive consistency, making erratic movements or mistakes very rare, as illustrated by the fourteen-to-one win-loss record in his final season.[3]

After ending his active riding career at the end of 2006, Everts became motocross race director for the KTM factory team, ultimately responsible for coaching their riders on the technical, mental and physical level. In July 2007 he renewed his contract with the Austrian manufacturer for another two years. Most of the time he lives in Monaco (a move for which he was criticized very much like fellow Belgian sports personalities Justine Henin and Tom Boonen), together with his wife Kelly and his son Liam.[4]

At the beginning of December 2018, Everts was admitted to the intensive care unit of UZ Leuven in critical condition. He had been bitten by the malaria mosquito a month earlier after participating in the 4 Hours of Lubumbashi in Congo. A charity match for local children. On December 17, Everts woke up from an artificial coma. In late December 2018, Everts was allowed to begin his physical rehabilitation. Neither his brain nor his organs would be damaged by the disease. Stefan Everts considered being alive at Christmas 2018 as his best Christmas present. His life was hanging by a thread, according to professors at UZ Leuven.[4]

However, the champion partially recovered from the disease after a series of surgeries that resulted in the loss of eight toes. Nevertheless, he managed to walk again.[5][6] 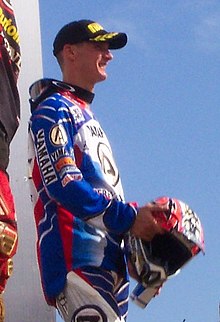