Stuart Street is one of the main streets of Dunedin, New Zealand. As with many of Dunedin's streets, it is named after a main street in Edinburgh, Scotland. 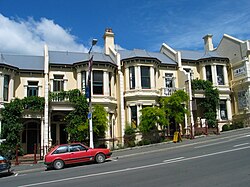 The Fortune Theatre, based in the former Trinity Methodist Church, on the corner of Moray Place and Upper Stuart Street. 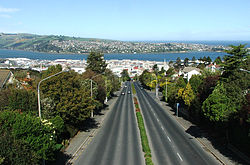 Looking down Upper Stuart Street from the Roslyn Overbridge, toward the city centre.

Upper Stuart Street climbs steeply from the Octagon, crossing Moray Place and continuing up to pass through the city's Town Belt and up to the suburb of Roslyn. One of Dunedin's landmarks is the Roslyn Overbridge, which crosses Upper Stuart Street at Roslyn; shortly beyond this point Stuart Street becomes Taieri Road, the original road leading out of Dunedin toward the Taieri Plains in the hinterland to the southwest.

Until the mid 20th century, Upper Stuart Street ran from the Octagon only as far as the junction with York Place. The contract for the north-western extension of Stuart Street, incorporating the former Albert Street (which ran from York Place to London Street) and cutting through the Town Belt to Roslyn, was let in 1949.[1] These works, which were completed in 1954,[2] also required the demolition of Littlebourne House,[3] which had been gifted to the City by the children of the former Mayor, the late Sir John Roberts, in 1934.[4]

Below the Roslyn overbridge, nestled within the Town Belt, lies Dunedin's main swimming pool, Moana Pool, and the imposing structure of Otago Boys' High School. Below this are the former buildings of the Otago Polytechnic (now located in the city's north end), including the King Edward Technical College. Closer to The Octagon, at the junction of Moray Place is the former Holy Trinity Methodist Church. In the block immediately above The Octagon are St. Paul's Anglican Cathedral and a distinctive series of historic terraced houses, now restaurants and boutique shops, which have a Category I Heritage New Zealand classification. 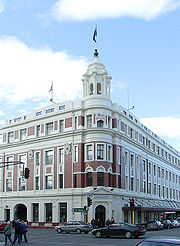 Lower Stuart Street, unlike Upper Stuart Street, is flat. It is one of Dunedin's more historic precincts. Within the heart of the CBD, it contains a large number of shops and cafes, and also, at its eastern end, several of Dunedin's more notable buildings. These include the Dunedin Law Courts and the Allied Press building (home of the Otago Daily Times newspaper). The street is dominated by the Dunedin Railway Station, which sits in Anzac Square at the foot of the street and forms a terminating vista for the street.

Numerous Stuart Street buildings are listed by Heritage New Zealand as Category I or Category II protected buildings. These buildings include the following (from northwest - Upper, to southeast - Lower):