Surbiton is a suburban neighbourhood of south-western Greater London, within the Royal Borough of Kingston upon Thames (RBK). It is situated next to the River Thames, 11 miles (18 km) southwest of Charing Cross. Formerly part of the ancient parish of Kingston upon Thames in the county of Surrey, it has been part of Greater London since 1965. Surbiton comprises four of the RBK's wards: Alexandra, Berrylands, St. Mark's, and Surbiton Hill.[1]

Founded originally as Kingston-upon-Railway during the Industrial Revolution, Surbiton possesses a mixture of grand 19th-century townhouses, Art Deco courts, and more recent residential blocks blending in with semi-detached 20th-century housing estates. With a population of 45,132 in 2016, it accounts for approximately 25% of the total population of the Royal Borough of Kingston upon Thames.[2] Surbiton extends over an area of 7.18 km2 (2.77 sq mi).[3]

Though Surbiton only received its current name in 1869, the name is attested as Suberton in 1179, Surbeton in 1263, Surpeton in 1486, and finally Surbiton 1597.[4] Sūth Bere-tūn means "southern grange" or "outlying farm" in Old English, as opposed to nearby Norbiton; both Norbiton and Surbiton were possessions of the royal manor of Kingston.[4] 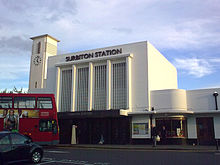 The present-day town came into existence after a plan to build a London-Southampton railway line through nearby Kingston was rejected by Kingston Council, who feared that it would be detrimental to the coaching trade. This resulted in the line being routed further south, through a cutting in the hill south of Surbiton. Surbiton railway station opened in 1838, and was originally named Kingston-upon-Railway.[5] It was only renamed Surbiton to distinguish it from the new Kingston railway station on the Shepperton branch line, which opened on 1 January 1869. The present station has an art deco façade.

As a result, Kingston is now on a branch line, whereas passengers from Surbiton (smaller in comparison) can reach London Waterloo in as little as 16 minutes[6] on a fast direct service; as well as places further afield, including Portsmouth and Southampton.

Surbiton was once home to Surbiton Studios which were owned by Stoll Pictures, before the company shifted its main production to Cricklewood Studios.

Sessions House housed the Municipal Borough of Surbiton before Surbiton became part of Greater London in 1965. 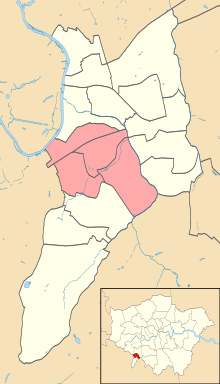 Location map of Surbiton within the Royal Borough of Kingston upon Thames and Greater London.

Surbiton falls within the UK parliamentary constituency of Kingston and Surbiton, which is represented in the House of Commons by Sir Ed Davey, a Liberal Democrat who served as Secretary of State for Energy and Climate Change during the Conservative-Liberal Democrat coalition. Davey also represented the constituency between 1997 and 2015, having been ousted for a short period of time by Conservative James Berry. In the 2017 general election, Davey went on to defeat Berry by 45% to 38%.[7] Both Davey's and Berry's offices were located in Surbiton's Berrylands ward.

In the 2016 United Kingdom European Union membership referendum, Kingston and Surbiton voted to remain a member of the European Union by 61.7% of the local vote.[8]

Surbiton is represented in the London Assembly by Conservative Tony Arbour, as part of Greater London's South West constituency.

Surbiton elects 12 of the Kingston upon Thames London Borough Council's 48 councillors. As of the 2018 local elections, the council is controlled by the Liberal Democrats, and all Surbiton's elected councillors are members of that party.

A London double-decker bus and an Abellio Surrey bus in Surbiton.

Surbiton is also close to two of London's largest airports: Heathrow and Gatwick.

Railways have served the town since it was founded. Surbiton and Berrylands stations are both served by South Western Railway services. It provides rail links to London Waterloo, Surrey and Hampshire.

If approval is granted for the project, Surbiton will be connected with the London Underground system via Crossrail 2. It is expected that the project will relieve pressure on both Surbiton and Berrylands stations.[10]

Surbiton lacks major motorways, although the A3 road cuts through Berrylands ward at Tolworth Underpass. Parts of the A307 that run along the River Thames, Portsmouth Road, have become part of the London cycle routes network. 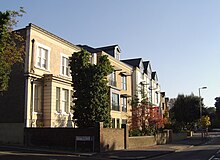 Until the early 19th century, Surbiton, like Norbiton, lay in the parish of All Saints, Kingston upon Thames. As a result, Surbiton's two town centre parish churches, Saint Mark's and Saint Andrew's, date back only to the Victorian era.[11] 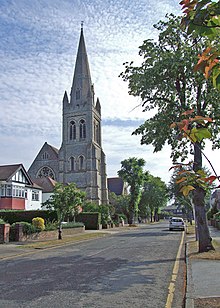 Saint Matthew's was completed in 1875, having taken less than 2 years to build. The church and the original vicarage were paid for by one man, William Matthew Coulthurst, who was the senior partner of Coutts Bank. On the outside of the east end of the church, there is a stone plaque recording this and the fact that it was partly built in memory of Hannah Mabella Coulthurst, the dead sister of William Matthew Coulthurst. Built into the wall behind the plaque, there is a photograph of Hannah, a copy of 'The Times' newspaper of the day and a letter from William Coulthurst stipulating that the church should remain in the evangelical tradition. The church and vicarage cost £26,500. The old vicarage was pulled down in 1939 and a subsequent one was built on the same plot. In 2012, work started on a new vicarage on part of the plot and this was completed in 2013.[13]

Other churches in Surbiton include Surbiton Hill Methodist Church on Ewell Road, opened in 1882,[14] and the Roman Catholic church of Saint Raphael's, completed in 1848 and located to the north of Surbiton, in the Kingston upon Thames postal district.[15]

In recent years, Surbiton has become more diverse in terms of religion, the Surbiton area having a Sikh Gurdwara[16] and an Orthodox Jewish synagogue.[17] According to the 2011 Census, Muslims form the largest minority religious community at about 5% of the population; the nearest mosque is located in Kingston upon Thames.

Approximately 74% of Surbiton's residents at the 2011 Census were born in the United Kingdom (73% in Alexandra, 71% in St. Mark's, 75% in Surbiton Hill, 76% in Berrylands). The largest ethnic group, with two-thirds of the population, is "White British", with "White Other" the second largest group at just under 10%.

Surbiton Lawn Tennis Club hosted International Tennis from 1900 (Surrey Grass Court Championships - SGCC) until 1981 at the tennis Club in Berrylands. From 1998 to 2008 International Tennis returned to Surbiton with an event hosted by The Lawn Tennis Association (LTA) and Surbiton Racket & Fitness Club (SRFC). The Surbiton Trophy was part of the ATP Challenger Series and in 2009 the venue was moved to Nottingham as part of a reorganisation by the LTA. The event came back to Surbiton Racket & Fitness Club in 2015 and continues to be played on the site in Berrylands.

Surbiton is famous for Surbiton Hockey Club, which was established in 1874, and is regarded as one of the best hockey clubs in the country. Its men's and ladies' 1st XIs currently both play in their respective national premier leagues, while its youth section regularly produces players of international quality.

Surbiton is also the home to Surbiton Croquet Club, which is amongst the strongest croquet clubs in the country and, with seven lawns, one of the largest. 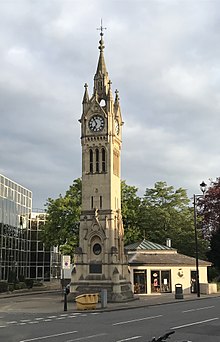 The clock tower, Surbiton, built to celebrate the Coronation of King Edward VII, 1902

The Pre-Raphaelite painters John Everett Millais (1829–1896) and William Holman Hunt (1827–1910) came to Surbiton in 1851, 26 years before Richard Jefferies (1848–1887). Millais used the Hogsmill River, in Six Acre Meadow, Tolworth, as the background for his painting Ophelia.[citation needed] Holman Hunt used the fields just south of this spot as the background to The Hireling Shepherd.[18]

In the mid-1870s the novelist Thomas Hardy (1840–1928) lived in a house called 'St. David's Villa' in Hook Road, Surbiton for a year after his marriage to Emma Gifford.[19] H.G.Wells, in his comic novel The Wheels of Chance, describes the cycle collision of 'Mr Hoopdriver' and a 'Young Lady in Grey'; the young lady approaching 'along an affluent from the villas of Surbiton'. The writer Enid Blyton was governess to a Surbiton family for four years from 1920, at a house called 'Southernhay', also on the Hook Road.[20] C. H. Middelton (1886–1945), who broadcast on gardening during the Second World War, lived in Surbiton, where he died suddenly outside his home.[21] The artist who brought Rupert the Bear to life for a whole generation, Alfred Bestall, sketched out his cartoons from his home in Cranes Park, Surbiton Hill.

Surbiton was the setting of Keble Howard's novel The Smiths of Surbiton, published in 1906. The novel proved successful and led to two sequels, The Smiths of Valley View (1909) and The Smiths in War-Time (1918), both also set in Surbiton.[22]

A 1972 episode of Monty Python's Flying Circus featured a mock documentary which investigated whether the residents of Hounslow, another London area suburb, had long ago been descendants of the people of Surbiton "who had made the great trek north".[23]

Surbiton station features in the 2009 film version of Harry Potter and the Half-Blood Prince, with actors Daniel Radcliffe as Harry Potter and Michael Gambon as Albus Dumbledore. Filming took place in November 2007.[25] The station also appears in Agatha Christie's Poirot: The Adventure of the Clapham Cook,[26] a TV adaptation of the short story by Agatha Christie and the first episode of the 1989 ITV series. Having been set in the 1930s Art Deco period and external shots of Hercule Poirot's fictional residence Whitehaven Mansions being filmed at Florin Court,[27] the station assists in maintaining the authenticity of the programme and was built within a year of Florin Court.

The guitarist and singer-songwriter Eric Clapton purchased one of his first guitars from a shop in Surbiton called Bells; the shop has since closed.[28]

In the episode of EastEnders broadcast on 23 November 2012, Ava Hartman, daughter of Cora Cross, refers to her difficulties of being a black woman growing up in Surbiton in the late 1960s and 1970s adopted by white parents.[citation needed]

According to the cassette insert for the 1980s computer game Manic Miner, the mine complex in which the game action takes place was located "while prospecting down Surbiton way..."[29]

The terrain of Surbiton is relatively flat, except for a small hill near its centre. It is part of the Royal Borough of Kingston upon Thames in Greater London, and borders the Borough of Elmbridge in Surrey. Surbiton consists of several smaller areas, including much of Seething Wells.