This article is about the Soviet World War II tank. For other uses of "T70", see T70 (disambiguation).

The T-70 was a light tank used by the Red Army during World War II, replacing both the T-60 scout tank for reconnaissance and the T-50 light infantry tank for infantry support. The T-80 light tank was a more advanced version of the T-70 with a two-man turret—it was produced only in very small numbers when light tank production was abandoned.[2] The T-90 self-propelled anti-aircraft gun was a prototype vehicle with twin machine guns, based on the T-70 chassis.

The T-70 was armed with a 45-mm L/46 gun Model 38 with forty-five rounds carried, and a coaxial 7.62-mm DT machine gun. The tank was operated by a driver and a commander who loaded and fired the gun. Armour thickness on the turret front was 60 mm, turret sides and rear: 35 mm, hull front and sides: 45 mm, roof and bottom: 10 mm. 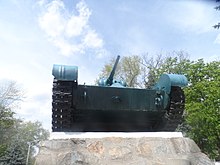 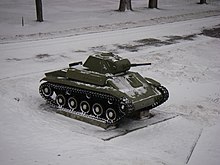 By 1942, light tanks were considered inadequate by the Red Army, unable to keep up with the T-34 medium tank and unable to penetrate the armour of most German tanks, but they could be produced by small factories that were unable to handle the large components of medium and heavy tanks. The T-70 was an attempt to remedy some of the shortcomings of the T-60 scout tank, which had very poor cross-country mobility, thin armour, and an inadequate 20-mm gun. It also replaced the very short production run of the T-50 light infantry tank, which was more sophisticated, but also much too complicated and expensive to produce.

The T-70 was designed by Nicholas Astrov's design team at Factory No. 38 in Kirov.

The first batch of T-70s were built with a GAZ-202 automotive engine on each side of the hull, one driving each track. This arrangement was seen to be a serious problem, even before the first tanks were issued. It was quickly redesigned as the T-70M (although it continued to be referred to as just T-70), with the engines in-line on the right side of the tank and a normal transmission and differential. The conical turret was replaced by one more easily welded out of plate armour, and moved to the left side of the hull.

Curiously, even after the T-70's production line was redesigned, SU-76 self-propelled guns started to be built with the same unsatisfactory unsynchronized two-engine layout, and all of them were later recalled for factory rebuilding as SU-76Ms.

In April 1942, the conical turrets on early-production machines were replaced with new welded turrets. The end of the T-70's production run was built with two 85-hp GAZ-203 engines, a Mark 4 commander's periscope replacing a vision slit, and other improvements.

Rear view of the T-70 at the Parola Tank Museum

The one-man turret of the Soviet light tanks made co-ordinating a tank platoon nearly impossible, because the commanders were kept busy acquiring targets, loading and firing the main gun and machine gun, and commanding their drivers.

In an attempt to compensate, the T-80 light tank was designed, a more robust version of the T-70 with a two-man turret. But there was enough lend-lease equipment available to fulfill the reconnaissance role of the light tanks, and armoured cars were better suited for light scouting and liaison. All light tank production was cancelled in October 1943, after only about 120 T-80s were built. No further light tanks would be built during the war.

In November 1943 Red Army tank units were reorganized: light tanks were replaced by the T-34 and the new T-34-85 variant, which started production the following month. Light tanks continued to be used in self-propelled artillery and some other units.

The Soviets did start development work on an amphibious light tank in 1945, resulting in the post-war PT-76, introduced in 1954.

On 6 July 1943, a T-70 commanded by Lieutenant B. V. Pavlovich of the 49th Guards Tank Brigade destroyed four German tanks (three medium tanks and one Panther) near the village of Pokrovka.[3]

On 26 March 1944, Sergeant Alexander Pegov of the 3rd Guards tank army, commanding a single T-70, saw a column of approximately 18 German tanks approaching. He took an ambush position hidden by foliage and then he waited. After a German PzKpfw V “Panther” tank came within 150 to 200 metres (160 to 220 yd), the T-70 suddenly opened fire with APCR ammunition and set fire to one Panther and immobilized another. The knocked-out Panthers blocked the road while the T-70 retreated. Pegov was promoted to a lieutenant and decorated as a Hero of the Soviet Union.[4][3]