Territorial authority districts are not subdivisions of regions, and some of them fall within more than one region. Regional council areas are based on water catchment areas, whereas territorial authorities are based on community of interest and road access. Regional councils are responsible for the administration of many environmental and public transport matters, while the territorial authorities administer local roading and reserves, water supply and sanitation, building consents, the land use and subdivision aspects of resource management, and other local matters.[2] Some activities are delegated to council-controlled organisations. The scope of powers is specified by the Local Government Act 2002.[3] 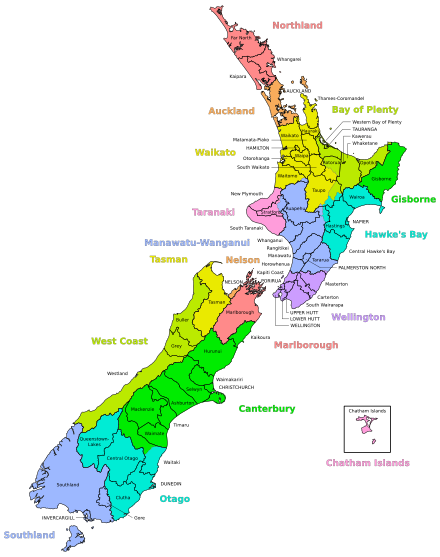 Map of New Zealand territorial authorities. Cities are bolded and capitalised. Regions are indicated with colours.

There are a number of islands where the Minister of Local Government is the territorial authority, two of which have a 'permanent population and/or permanent buildings and structures.' The main islands are listed below (population according to 2001 census in parenthesis):

In addition, seven of the nine groups of the New Zealand outlying islands are outside of any territorial authority:

Mayors in New Zealand are directly elected—at large, by all eligible voters within a territorial authority—in the local elections to a three-year term.[5] The Local Government Act 2002 defines the role of a mayor as having to provide leadership to the other elected members of the territorial authority, be a leader in the community and perform civic duties.[3]

For many decades until the local government reforms of 1989, a borough with more than 20,000 people could be proclaimed a city. The boundaries of councils tended to follow the edge of the built-up area, so little distinction was made between the urban area and the local government area.

New Zealand's local government structural arrangements were significantly reformed by the Local Government Commission in 1989 when approximately 700 councils and special purpose bodies were amalgamated to create 87 new local authorities. Regional councils were reduced in number from 20 to 13, territorial authorities (city/district councils) from 200 to 75, and special purpose bodies from over 400 to 7.[6] The new district and city councils were generally much larger and most covered substantial areas of both urban and rural land. Many places that once had a city council were now being administered by a district council.

As a result, the term "city" began to take on two meanings.

City also came to be used in a less formal sense to describe major urban areas independent of local body boundaries. This informal usage is jealously guarded. Gisborne, for example, adamantly described itself as the first city in the world to see the new millennium. Gisborne is administered by a district council, but its status as a city is not generally disputed.[citation needed]

Under current law, an urban area has to be at least 50,000 residents before it can be officially proclaimed as a city.[7]

Reports on completed reorganisation proposals since 1999 are available on the Local Government Commission's site (link below).

On 26 March 2009, the Royal Commission on Auckland Governance recommended the Rodney, North Shore, Waitakere, Auckland City, Manukau, Papakura and Franklin territorial councils and the Auckland Regional Council be abolished and the entire Auckland region to be amalgamated into one "supercity".[9] The area would consist of one city council (with statutory provision for three Māori councillors), four urban local councils, and two rural local councils:

The National-led Government responded within about a week. Its plan, which went to a Select Committee, accepted the proposal for supercity and many community boards, but rejected proposals for local councils and, initially, no separate seats for Māori.

Criticism of the amended proposal came largely from residents in Manukau, Waitakere and North Shore Cities.[11][12][13][14][15][16][17] In addition, Māori Affairs Minister Pita Sharples spoke against the exclusion of the Māori seats, as recommended by the Royal Commission.[18][19] Opposition Leader Phil Goff called for a referendum on the issue.[20]

Auckland Council was created on 1 November 2010 — a unitary authority that is classed as both a region and a territorial authority. It incorporated the recommendations of the Royal Commission and was established via legislation.[21] Auckland Council is uniquely divided into "local boards" representing the lowest tier of local government.[22]