In Ancient Roman warfare, the testudo or tortoise formation was a type of shield wall formation commonly used by the Roman Legions during battles, particularly sieges.[1] 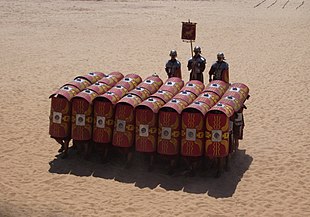 The testudo formation in a Roman military reenactment.

In the testudo formation, the men would align their shields to form a packed formation covered with shields on the front and top.[2] The first row of men, possibly excluding the men on the flanks, would hold their shields from about the height of their shins to their eyes, so as to cover the formation's front. The shields would be held in such a way that they presented a shield wall to all sides. The men in the back ranks would place their shields over their heads to protect the formation from above, balancing the shields on their helmets, overlapping them. If necessary, the legionaries on the sides and rear of the formation could stand sideways or backwards with shields held as the front rows, so as to protect the formation's sides and rear; this reduced the speed and mobility of the formation, but offered consistent defensive strength against opposing infantry and excellent protection against arrows and other missile attacks.

Plutarch describes this formation as used by Mark Antony during his invasion of Parthia in 36 BC:

Then the shield-bearers wheeled round and enclosed the light-armed troops within their ranks, dropped down to one knee, and held their shields out as a defensive barrier. The men behind them held their shields over the heads of the first rank, while the third rank did the same for the second rank. The resulting shape, which is a remarkable sight, looks very like a roof, and is the surest protection against arrows, which just glance off it.[3]

Cassius Dio writes about the testudo when describing the campaign of Mark Antony in 36 BC:

This testudo and the way in which it is formed are as follows. The Baggage animals, the light-armed troops, and the cavalry are placed in the center of the army. The heavy-armed troops who use the oblong, curved, cylindrical shields are drawn up around the outside, making a rectangular figure, and, facing outward and holding their arms at the ready, they enclose the rest. The others who have flat shields, form a compact body in the center and raise their shields over the heads of all the others so that nothing but shields can be seen in every part of the phalanx alike and all the men by the density of the formation are under shelter from missiles. Indeed, it is so marvelously strong that men can walk upon it and whenever they come to a narrow ravine, even horses and vehicles can be driven over it.

The testudo was used to protect soldiers from all types of missiles. It could be formed by immobile troops and troops on the march. The primary drawback to the formation was that, because of its density, the men found it more difficult to fight in hand-to-hand combat and because the men were required to move in unison, speed was sacrificed. As "phoulkon", it played a great role in the tactics employed by the Byzantines against their eastern enemies.

The testudo was not invincible, as Cassius Dio also gives an account of a Roman shield array being defeated by Parthian cataphracts and horse archers at the Battle of Carrhae:

For if [the legionaries] decided to lock shields for the purpose of avoiding the arrows by the closeness of their array, the [cataphracts] were upon them with a rush, striking down some, and at least scattering the others; and if they extended their rank to avoid this, they would be struck with the arrows.

Tacitus recorded its use during the siege of the city of Cremona by the troops of Vespasian under command of Marcus Antonius Primus. During the attack the troops advanced under the rampart “holding their shields above their heads in close ‘tortoise’ formation”. [4]

During the Euromaidan protests in Kyiv, Ukraine in 2014 the Berkut riot police used the testudo tactic to protect themselves.[8] Israeli forces[9] and American George Floyd protestors[10] have been known to use the formation.