Robert James Rallison[1][2] (born May 14, 1996), known online as TheOdd1sOut, is an American YouTuber, animator, comedian, and author. He produces storytime animations on his YouTube channel. 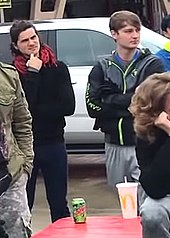 Rallison was born in Chandler, Arizona[2] on May 14, 1996.[3][4] He is one of five children of writer Janette Rallison.[5][better source needed] He attended Perry High School in Gilbert, Arizona.[6] According to Rallison, he did not have any formal training in drawing, but had wanted to be a cartoonist as a child.[7]

Rallison's first published illustrated works were webcomics, under the title TheOdd1sOut. He uploaded the first comic strip onto Tumblr in June 2012, when he was 16.[7] After 100 comics, he had amassed 100 followers, and it took him about a year to settle into his art style.[7] Rallison also later uploaded the strip to iFunny.[8] By September 2016 he had written around 400 strips. Rallison described the characters in his comics as "marshmallow people" because of their white, roundish look. His comics tended to focus on lighthearted themes, such as taking famous puns literally, or poking fun at social cliches.[6]

On August 30, 2014, just over two years after starting his webcomic, Rallison started his YouTube channel as theodd1sout comic. In his animated videos, which feature the same "marshmallow people" as the webcomic,[6] he talks about his life story, his thoughts, and opinions. His first video was titled "A Book I Made as a Kid", looking at a short story he made while in elementary school.[2] In April 2016, his channel gained over 278,000 subscribers, giving him a total of over 400,000 subscribers.[9] At some point, Rallison dropped out of college to make videos full-time.[2]

Rallison has collaborated with others to produce two songs and their accompanying music videos: "Life is Fun" in July 2018 with David Brown from Boyinaband;[11][12] and "Good Person" in December 2020 with Joel Berghult from RoomieOfficial.

His animated character appeared in the credits scene of YouTube Rewind: The Shape of 2017 and in YouTube Rewind 2018: Everyone Controls Rewind where he has a speaking role.[13]

In March 2019, Rallison was in MrBeast's $200,000 YouTuber Battle Royale video. He was on a team with Jaiden Animations and Anthony Padilla and they won the first round.[14] Rallison gave the earnings he made from the YouTuber Battle Royale to #TeamTrees, a non-profit started by MrBeast that aimed to plant 20 million trees by the end of 2019.[15]

Rallison wrote a book titled The Odd 1s Out: How to Be Cool and Other Things I Definitely Learned from Growing Up, which was released in July 2018.[7] It was ranked No. 12 in the "trade paperback" category on Publishers Weekly's August 13, 2018 bestseller list.[16]

In 2017, Dave Trumbore of Collider named Rallison one of five YouTubers who were "poised for mainstream success".[22] In 2018, Kristin Brantley of Culturess reviewed his channel and webcomics favorably, writing, "You’ll be glued to the screen watching all of these hilarious clips and reading all his great comics."[23]