During summer months – from the last Sunday in September until the first Sunday in April – daylight saving time is observed and clocks are advanced one hour. New Zealand Daylight Time (NZDT) is 13 hours ahead of UTC, and Chatham Daylight Time (CHADT) 13 hours 45 minutes ahead.[3]

New Zealand's associated states – the Cook Islands and Niue – and the dependent territory of Tokelau use several different time zones at their own discretion.

On 2 November 1868, New Zealand officially adopted a standard time to be observed nationally, and was the first country to do so, about fifteen years before any other. Chatham Island was 45 minutes ahead of mainland New Zealand [twelve hours and fifteen minutes ahead of Coordinated Universal Time].[4][5] It was based on longitude 172° 30′ East of Greenwich, 11+1⁄2 hours ahead of Greenwich Mean Time (GMT).[6] This standard was known as New Zealand Mean Time (NZMT).[7]

In 1941, during the Second World War, clocks were advanced half an hour, to reduce electric power use[8] making New Zealand 12 hours ahead of GMT. This change was made permanent from 1946 by the Standard Time Act 1945,[9] at which the time at the 180°E meridian was made the basis for New Zealand Time.[10] NZST remained half an hour ahead of NZMT, and the Chatham Islands 45 minutes ahead of NZST. 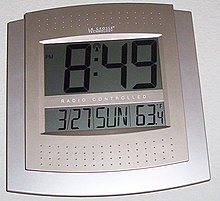 The use of atomic clocks, which can measure time extremely accurately, led to the adoption of UTC. This was incorporated into New Zealand law in 1974.

In the late 1940s the atomic clock was developed and several laboratories began atomic time scales. A new time scale known as Coordinated Universal Time (UTC) was adopted internationally in 1972.[11] This was based on the readings of atomic clocks, updated periodically in accordance with time variations in the Earth's rotation by the addition or deletion of seconds (called leap seconds). The Time Act 1974 defines New Zealand Standard Time as 12 hours in advance of UTC.[12]

In 2011, the New Zealand dependency of Tokelau moved its time zone forward by 24 hours, by skipping 30 December.[13]

Starting in 1909, a member of Parliament, Sir Thomas Kay Sidey annually put forward a bill to advance the clocks an hour from September to the following March and the Summer Time Act 1927 succeeded.[14] In 1927, clocks were advanced by an hour from first Sunday in November to the first Sunday in March. This proved unpopular, so the Summer Time Act 1928 revised this to a half-hour shift from 14 October 1928 (second Sunday) to 17 March 1929 (third Sunday), then the Summer Time Act 1929 permanently fixed this half-hour shift to run from the second Sunday in October to the third Sunday in March every year. In 1933, the period was extended from the first Sunday in September to the last Sunday in April. This continued until the Second World War, when emergency regulations in 1941 extended daylight saving to cover the whole year with annual re-applications until the Standard Time Act 1945 made the abandonment of NZMT permanent in 1946, so that 180° becomes the base longitude and what was called NZ Summer Time (NZST) became NZ Standard Time.

In 1985 a comprehensive survey was undertaken by the Department of Internal Affairs. Public attitudes towards NZDT (New Zealand Daylight Time) and its effects on work, recreation and particular groups of people in society were surveyed. The survey indicated that 76.2% of the population wanted NZDT either continued or extended.[15] 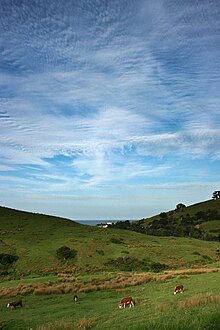 The strongest opposition to DST has traditionally come from dairy farmers[16] due to disrupted schedules and shorter working times.

The survey also concluded that opinion on the topic differed little between sexes, and that support for NZDT was generally higher in urban centres. Daylight saving was famously opposed in the small Northland dairy farming community of Ararua,[16] which refused to adjust its clocks for some years. Support for shortening or abolishing NZDT was always in the minority in the areas surveyed.

As a consequence of the survey and further feedback from the public, in 1988 the Minister of Internal Affairs arranged for a trial period of extended NZDT to be held from the second Sunday in October 1989 to the third Sunday in March 1990. The Minister invited the public to write to him with their views on the five-week extension.[15]

The Daylight Time Order 1990 declared that NZDT would run from 02:00 NZST on the first Sunday in October to 03:00 NZDT on the third Sunday in March.[9]

New Zealand time, including DST, is used by several Antarctic bases that are supplied from New Zealand. This results in the oddity that the Amundsen–Scott South Pole Station sets its clocks an hour further ahead during the southern summer, when the sun is constantly above the horizon, than in the southern winter, when the sun is constantly below the horizon. The extreme geographic position of the base means that no possible adjustment of the daily activity cycle can have any effect on the amount of sunlight received during those activities. However, the arrangement presumably makes real time communications with New Zealand more practical, particularly in dealing with offices.

The other countries in the Realm of New Zealand – Cook Islands, Niue, and Tokelau – do not maintain DST. Two of them are the other side of the International Date Line and have 22–24 hours time difference to New Zealand.

It is disseminated by various means, including time pips broadcast on Radio New Zealand,[18] speaking clock and Network Time Protocol.[19]

There are two associated states of New Zealand in the Pacific Ocean, both on the other side of the International Date Line:

The New Zealand dependency of Tokelau is in the UTC+13:00 time zone[20] or Military M' (Mike Prime)[1] and does not observe daylight saving time. Clocks in Tokelau are set to the same time as or 1 hour ahead of New Zealand: at noon on Thursday in New Zealand, it is 12:00 or 13:00 on Thursday in Tokelau.[citation needed]