The Université catholique de Louvain (also known as the Catholic University of Louvain, the English translation of its French name, and the University of Louvain, its official English name)[2] is Belgium's largest French-speaking university. It is located in Louvain-la-Neuve, which was expressly built to house the university, and Brussels, Charleroi, Mons, Tournai and Namur. Since September 2018, the university has used the branding UCLouvain, replacing the acronym UCL, following a merger with Saint-Louis University, Brussels. 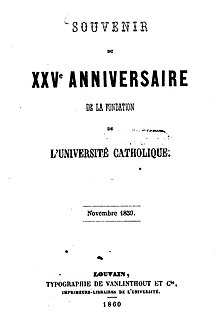 Book celebrating the 25 anniversary of the founding of the Catholic University of Louvain, November 3, 1859.

The original University of Louvain (Universitas Lovaniensis) was founded at the centre of the historic town of Leuven (or Louvain) in 1425, and abolished by the law in 1797 making it the first university in Belgium and the Low Countries. This University was the centre of the Baianism, the Jansenism[3] and the Febronianism in Europe. A new university, the State University of Louvain, was founded in 1817 and abolished by the law in 1835. A new catholic university was founded in Mechlin in 1834, the Catholic University of Mechlin and moved in Leuven in 1835 that is frequently, but controversially, identified as a continuation of the older institution.AB In 1968 the Catholic University of Leuven split into the Dutch-language Katholieke Universiteit Leuven, which stayed in Leuven, and the French-language Université catholique de Louvain, which moved to Louvain-la-Neuve in Wallonia, 30 km southeast of Brussels. Since the 15th century, Leuven/Louvain, as it is still often called, has been a major contributor to the development of Catholic theology. The UCLouvain is often ranked among the world's top 50 institutions for the study of philosophy and top 20 institutions for theology and religious studies.[4][5][6][7]

For the history of the university prior to 1968, see Catholic University of Leuven (1834–1968) § History, and Universities in Leuven.

The Catholic University of Leuven, based in Leuven ("Louvain" in French), 30 km east of Brussels, provided lectures in French from its founding in 1834, and in Dutch from 1930. In 1968, the Dutch-language section became the independent Katholieke Universiteit Leuven, which remained in Leuven, while the French-speaking university was moved to a greenfield campus and town, Louvain-la-Neuve, 30 km south-east of Brussels, in a part of the country where French is the official language. This separation also entailed dividing existing library holdings between the two new universities.

With the democratization of university education already stretching existing structures, plans to expand the French-speaking part of the university at a campus in Brussels or Wallonia were quietly discussed from the early 1960s, but it was not anticipated that the French-speaking section would become an entirely independent university and lose all of its buildings and infrastructure in Leuven. The first stone of the new campus at Louvain-la-Neuve was laid in 1971, and the transfer of faculties to the new site was completed in 1979.

The Halles universitaires in Louvain-la-Neuve

According to a 2007 agreement, the University of Louvain was to absorb three smaller French-speaking catholic colleges: the Facultés universitaires Notre-Dame de la Paix (FUNDP) located in Namur, the Facultés universitaires Saint-Louis (FUSL) located in Brussels (now called Saint-Louis University, Brussels) and the Catholic university of Mons (FUCaM) located in Mons and Charleroi. The negotiations for a full merger aborted by an insufficient vote by the general assembly of the FUNDP in December 2010. The result was a merger between the University of Louvain and the FUCaM in Mons, effective from September 15, 2011. The Mons campus is denoted UCLouvain FUCaM Mons. The three universities still collaborate in consortium, the Académie Louvain. Within this group, member universities have coordinated their masters programmes in the fields of economics, management, political sciences and sciences as well as the doctoral programmes in all disciplines.

In September 2018, the University of Louvain (or UCL until then) and Saint-Louis University, Brussels de facto merged, founding the UCLouvain, a denomination they currently share.

In 1425, Dukes of Brabant created the University of Louvain[8] (Université de Louvain), which was suppressed under Joseph II, reopened in 1790, and was finally closed under the French Republic in 1797.[9]

In a Catholic spirit inspired by Pope Gregory XVI,[12] the promoter and first rector of the university, Monseigneur de Ram, wanted to create a shield that would repulse religion's enemies and block every doctrine weakening the base of Catholic society.

The pharmacy school was founded in 1845 and the engineering school in 1865.

In 1884 the Catholic University of Louvain celebrated its fiftieth anniversary.[13]

In 1968, as a result of linguistic issues, the university was divided into two different universities: one French speaking, which moved to the province of Walloon Brabant, and one Dutch speaking, which remained in the same location.

In 1970, these two universities were established by law as the Katholieke Universiteit te Leuven and Université catholique de Louvain.

In 1971, the first foundation stone was laid in Louvain-la-Neuve, a new city constructed for the French-speaking university. 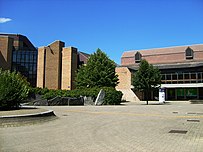 The Montesquieu square in Louvain-la-Neuve, where the Faculty of Law and Criminology is located.

As an independent university, the faculties of Philosophy, Arts and Human Sciences, Economic, Social, Political and Communication Sciences (ESPO), Law (DROI), the Institute for European Studies (IEE) and the Marie-Haps Faculty of Translating and Interpreting of the UCLouvain Saint-Louis - Bruxelles are not attached to the corresponding faculties of UCLouvain.

The garden of medicinal plants on campus UCLouvain Bruxelles Woluwe.

Sector of Science and Technology

While the main campus of the University of Louvain is based in Louvain-la-Neuve, it also comprises a campus in Brussels, UCLouvain Brussels Woluwe, in Woluwe-Saint-Lambert, which until recently was called "Louvain-en-Woluwe" hosting the university's sector of medical science and primary academic hospital (8000 students), a campus in Mons called UCLouvain FUCaM Mons (2300 students), a minor installation in Charleroi with 133 students (as of 2011) at UCLouvain Charleroi, an architectural school in Tournai, UCLouvain Tournai, with 540 students (as of 2011), and an architectural school in Brussels, UCLouvain Bruxelles Saint-Gilles, with 570 students (as of 2011). With the merger with Saint-Louis University, it also comprises an independent campus specialized in education and research of social and human sciences in the center of the City of Brussels, UCLouvain Saint-Louis - Bruxelles and the Marie-Haps Faculty of Translating and Interpreting in Ixelles' European quarter, next to the European Parliament (4150 students).

UCLouvain's main medical implementation is in UCLouvain Brussels Woluwe, Woluwe-Saint-Lambert, Brussels, where the faculty of medicine is installed.

The UCLouvain FUCaM Mons campus also owns the extended collection of the Convent of the Black Sisters in the city-center of Mons, where the university has placed its Ateliers des FUCaM campus.[18]

The University of Louvain educates around 27,261 students from 127 nationalities[25] in all areas of studies at its different campuses. It has educated a large part of Belgium's elite and is still considered, with its Dutch-speaking sister, as a centre of excellence in many fields. In 2006, it was ranked 76th in the world universities ranking established by the Times Higher Education supplement (24th in Europe).

Cercles are Student Societies or Fraternities based around each faculty. The Cercles, along with the Régionales (which are based around their respective regions of origin) coordinate and manage most of the students' animation and nightlife. Most Cercles run small bars to fund their activities, and also jointly operate a larger nightclub, "La Casa".

Cercles and Régionales are run exclusively by member students known as the Committee. These members are elected every year, usually by voting from all members (active or otherwise) wishing to participate, although some Cercles restrict the number of possible voters in some cases.

Aside from promoting student folklore and coordinating student animation, Cercles also offer academic aid to students in their respective faculties and organize more cultural activities, such as visits to museums and/or other cities, conferences, and low-cost trips for students (for example skiing in the Alps during the Winter Break).

Every Cercle and Régionale has its own customs and traditions, but some are practiced by all:

The Baptême (French: baptism) is a hazing ceremony used by most to induct new members, who then participate in a number of trials and activities involving eggs and other foodstuff, paint, demeaning chants etc. Baptized members (les Baptisés) are among the most common type of members, and some Cercles and Régionales try to only accept new members this way, although "it is in no way an obligation to be baptized in order to be a part of the Cercle or to frequent them".

The calotte is a Belgian student cap worn by students attending Catholic universities. They are emblems of student folklore dating back to the late 19th century. Nowadays, most calottes are passed by way of a ceremony known as the coronae. How they are passed and what must be known or done to deserve it depends on the Cercle or Régionale. One thing that is universally known, is that there is a lot of singing involved.

Cercles are notorious for their generally high output of alcohol (especially beer) and low level of cleanliness. Students tend to wear old clothes that they don't mind damaging or dirtying as a consequence, and the overall ambiance is more akin to a rave or a frat-party than a nightclub or sports bar.

Unique to UCLouvain a Kot-à-projet (kap) is a kot whose inhabitants have similar interests and who organise activities for the general student population, they are similar to Fraternity and sorority houses, but smaller in size with only the committee living in the kot. Being small several Kots can be situated in the same, university owned, apartment building. One of them is "le kap contes", a kot promoting the art of storytelling. Another is called "Kap Délices" which suggests varied activities such as theme buffets, cooking lessons, and material renting.[28]

from Louvain-La-Neuve, Belgique, CC BY 2.0

The 24 Hour Cycle (24h Vélo) is, nominally, a bicycle endurance road race held in October, organised by CSE Animations (Centre Sportif Etudiant). While there is an elite race with teams of two, Student groups enter novelty themed multi-bike vehicles, in the shape of a Van or Whale for example, for prizes. The quality of these designs range in terms of artistic merit, and ability to stay intact over the duration of the race. A 240-minute race also takes place for teenagers. The event is probably best known for what happens off the track. Concurrent with the race is Belgium's largest student event, with concerts and stands lasting the full 24hrs.