In 1971, North Carolina passed legislation bringing into the University of North Carolina all 16 public institutions that confer bachelor's degrees. This latest round of consolidation gave each constituent school its own chancellor and board of trustees. In 1985, the North Carolina School of Science and Mathematics, the nation's first public residential high school for gifted students, was declared an affiliated school of the university. In 2007, the high school became a full member of the university.

In March 2020, due to the COVID-19 pandemic, the UNC System shut down in-person instruction at all of its campuses indefinitely. In an unprecedented move to limit the spread of the disease, institutions were asked to remove as many students from on-campus housing as possible, implement teleworking wherever practical, and to transition to an online learning environment.[8] 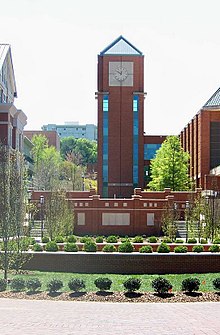 © UNCCTF at the English Wikipedia, CC-BY-SA-3.0

UNC Charlotte. The university expanded significantly in the 1960s and 1970s.

The legal authority and mandate for the University of North Carolina is contained in the State's first Constitution (1776),[10] which provided in Article XLI

That a school or schools shall be established by the Legislature, for the convenient instruction of youth, ... and all useful learning shall be duly encouraged, and promoted, in one or more universities,

The state legislature granted a charter and funding for the university in 1789.[11]

Article IX of the 1971 North Carolina Constitution deals with all forms of public education in the state. Sections 8 and 9 of that article address higher education.[12]

The General Assembly shall provide that the benefits of The University of North Carolina and other public institutions of higher education, as far as practicable, be extended to the people of the State free of expense.

Statutory provisions stipulate the current function and cost to students of the University of North Carolina.[13]

Within its seventeen campuses, UNC houses two medical schools and one teaching hospital, ten nursing programs, two schools of dentistry, one veterinary school and hospital, and a school of pharmacy, as well as a two law schools, 15 schools of education, three schools of engineering, and a school for performing artists.[5] The oldest university, the University of North Carolina at Chapel Hill, first admitted students in 1795. The smallest and newest member is the North Carolina School of Science and Mathematics, a residential two-year high school, founded in 1980 and a full member of the University since 2007. The largest university is North Carolina State University, with 34,340 students as of fall 2012.

The enrollment numbers are the official headcounts (including all full-time and part-time, undergrad and postgrad students) from University of North Carolina website.[52] This does not include the North Carolina School of Science and Mathematics, the figure for NCSSM is taken from its own website.[53]