In 2007, the University of Wales changed from a federal structure to a confederal one, and many of the constituent colleges became independent universities. Following a number of controversies in the late 2000s involving overseas affiliates, cheating and student visas,[2] a decision was made to abolish the university as it then existed.

At the same time, the university admitted four new institutions. Thus, North East Wales Institute of Higher Education (NEWI), Swansea Institute of Higher Education and Trinity College, Carmarthen (who were all previously Associated Institutions) along with the Royal Welsh College of Music & Drama (which was previously a Validated Institution) were admitted as full members of the university on 27 July 2004.

The Royal Welsh College of Music & Drama subsequently left the university in January 2007. More changes followed in September 2007 when the university changed from a federal structure to a confederation of independent institutions, allowing those individual institutions which had gained the status of universities in their own right to use the title of university – these institutions are Aberystwyth University, Bangor University, Glyndŵr University (formerly the North East Wales Institute of Higher Education (NEWI)), Swansea Metropolitan University and Swansea University.

In November 2008, Aberystwyth, Bangor and Swansea Universities decided to exercise their right to register students to study for their own awarded degrees.

In 2010 the university broke its links with a Malaysian college after it was discovered its director had bogus qualifications, while a Thai institution linked to the university was found to be operating illegally. In June 2011, a report from the Quality Assurance Agency found that the university had not run the necessary checks on institutes delivering courses it validated, and instructed it to review all of its validation arrangements.[5] In October, the University announced that it would cease validating courses, just before news broke that one of its affiliated colleges in London was involved in a visa fraud.[6][7][8] This led to calls from the vice chancellors of the universities of Aberystwyth, Bangor, Cardiff, Glamorgan and Swansea for the University of Wales to be wound up.[9]

It was announced later in October that the University of Wales would be "effectively abolished", and merged into the University of Wales Trinity Saint David (UWTSD),[10][11][12][13][14] which itself merged with Swansea Metropolitan University[15] on 1 August 2013. In August 2017 a deed of union was approved by the University of Wales and UWTSD, which integrated the two universities into a single functional body prior to a full legal constitutional merger; as of February 2020 this full merger has not been finalised.[16][17][18] As part of the work towards merger, custody of the university's Gregynog Hall and its estate was transferred to the newly created Gregynog Trust in July 2019.[19] 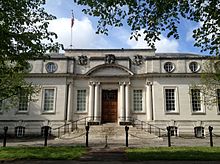 The administrative office of the University of Wales is located in Cardiff's Civic Centre. In addition to its work with the accredited institutions in Wales, the university also validates schemes of study at some 130 centres in the UK and across the world, though it is currently in the process of bringing this current validation model to a close. It runs a highly rated research centre, the Centre for Advanced Welsh and Celtic Studies (incorporating the Welsh Dictionary Unit), which is adjacent to the National Library of Wales in Aberystwyth.[20] The first edition of Geiriadur Prifysgol Cymru (The University of Wales Dictionary), which has the same status for Welsh as the OED does for English, was completed in 2002, eighty-two years after it had been started. The University of Wales Press[21] was founded in 1922 and publishes around seventy books a year in both English and Welsh. The university also has a study and conference centre at Gregynog, near Newtown.[22]

A number of institutions were not accredited by the university, but had some of their courses validated by it.[38] There was some publicity and questioning of the quality of these external courses,[39][40][41][42] and in October 2011, in response to changes in higher education in Wales, including the university's merger, the university announced that it would launch a new academic strategy which would see the institution only award degrees to students on courses designed and fully controlled by the university. All existing students at validated institutions are able to continue the remainder of their studies for a University of Wales award and will have continuous support.[43][44][45]

See also: Category: Vice-Chancellors of the University of Wales

The appointment of Vice-Chancellor of the University of Wales is held by a head of one of its constituent colleges/universities.

See also: Category:Alumni of the University of Wales

Official histories of the University