Victorian architecture is a series of architectural revival styles in the mid-to-late 19th century. Victorian refers to the reign of Queen Victoria (1837–1901), called the Victorian era, during which period the styles known as Victorian were used in construction. However, many elements of what is typically termed "Victorian" architecture did not become popular until later in Victoria's reign, roughly from 1850 and later. The styles often included interpretations and eclectic revivals of historic styles. The name represents the British and French custom of naming architectural styles for a reigning monarch. Within this naming and classification scheme, it followed Georgian architecture and later Regency architecture, and was succeeded by Edwardian architecture. 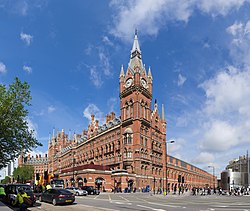 Although Victoria did not reign over the United States, the term is often used for American styles and buildings from the same period, as well as those from the British Empire.

Victorian architecture in the United Kingdom 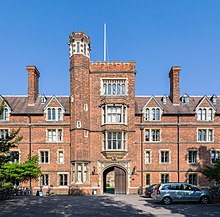 During the early 19th century, the romantic medieval Gothic Revival style was developed as a reaction to the symmetry of Palladianism, and such buildings as Fonthill Abbey were built.

By the middle of the 19th century, as a result of new technology, construction was able to incorporate metal materials as building components. Structures were erected with cast iron and wrought iron frames however, due to being weak in tension, these materials were effectively phased out in place for more structurally sound steel.[1] One of the greatest exponents of iron frame construction was Joseph Paxton, architect of the Crystal Palace. Paxton also continued to build such houses as Mentmore Towers, in the still popular English Renaissance styles. New methods of construction were developed in this era of prosperity, but ironically the architectural styles, as developed by such architects as Augustus Pugin, were typically retrospective.

In Scotland, the architect Alexander Thomson who practiced in Glasgow was a pioneer of the use of cast iron and steel for commercial buildings, blending neo-classical conventionality with Egyptian and Oriental themes to produce many truly original structures. Other notable Scottish architects of this period are Archibald Simpson and Alexander Marshall Mackenzie, whose stylistically varied work can be seen in the architecture of Aberdeen.

While Scottish architects pioneered this style it soon spread right across the United Kingdom and remained popular for another forty years. Its architectural value in preserving and reinventing the past is significant. Its influences were diverse but the Scottish architects who practiced it were inspired by unique ways to blend architecture, purpose, and everyday life in a meaningful way.

Some styles, while not uniquely Victorian, are strongly associated with the 19th century owing to the large number of examples that were erected during that period:

The China Merchants Bank Building is an example of Victorian architecture found in Shanghai, China

During the 18th century, a few English architects emigrated to the colonies, but as the British Empire became firmly established during the 19th century, many architects emigrated at the start of their careers. Some chose the United States, and others went to Canada, Australia and New Zealand. Normally, they applied architectural styles that were fashionable when they left England. By the latter half of the century, however, improving transport and communications meant that even remote parts of the Empire had access to publications such as the magazine The Builder, which helped colonial architects keep informed about current fashion. Thus, the influence of English architecture spread across the world. Several prominent architects produced English-derived designs around the world, including William Butterfield (St Peter's Cathedral, Adelaide) and Jacob Wrey Mould (Chief Architect of Public Works in New York City). 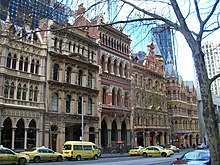 from Melbourne, Australia, CC BY 2.0

Modern skyscrapers on Collins Street, Melbourne, have been deliberately set back from the street in order to retain Victorian-era buildings. 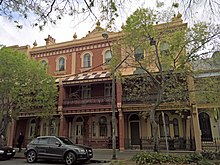 Most terraces in Australia have been preserved. Pictured are Victorian style terraces in Sydney

The Victorian period flourished in Australia and is generally recognised as being from 1840 to 1890, which saw a gold rush and population boom during the 1880s in the states of Victoria and New South Wales. There were fifteen styles that predominated:[2]

The Arts and Crafts style and Queen Anne style are considered to be part of the Federation Period, from 1890 to 1915.[3] 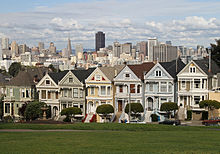 The Painted Ladies are an example of Victorian architecture found in San Francisco, California.

In the United States, 'Victorian' architecture generally describes styles that were most popular between 1860 and 1900. A list of these styles most commonly includes Second Empire (1855–85), Stick-Eastlake (1860–ca. 1890), Folk Victorian (1870–1910), Queen Anne (1880–1910), Richardsonian Romanesque (1880–1900), and Shingle (1880–1900). As in the United Kingdom, examples of Gothic Revival and Italianate continued to be constructed during this period, and are therefore sometimes called Victorian. Some historians classify the later years of Gothic Revival as a distinctive Victorian style named High Victorian Gothic. Stick-Eastlake, a manner of geometric, machine-cut decorating derived from Stick and Queen Anne, is sometimes considered a distinct style. On the other hand, terms such as "Painted Ladies" or "gingerbread" may be used to describe certain Victorian buildings, but do not constitute a specific style. The names of architectural styles (as well as their adaptations) varied between countries. Many homes combined the elements of several different styles and are not easily distinguishable as one particular style or another.

The photo album L'Architecture Americaine by Albert Levy published in 1886 is perhaps the first recognition in Europe of the new forces emerging in North American architecture.[15]

Efforts to preserve landmarks of Victorian architecture are ongoing and are often led by the Victorian Society. A recent campaign the group has taken on is the preservation of Victorian gasometers after utility companies announced plans to demolish nearly 200 of the now-outdated structures.[19]