This article is about video game genres. For a taxonomic overview, see Game classification.

A video game genre is a classification assigned to a video game based primarily on its gameplay (type of interaction) rather than visual or narrative features.[1][2] A video game genre is normally defined by a set of gameplay challenges considered independently of setting or game-world content, unlike works of fiction that are expressed through other media, such as films or books. For example, a shooter game is still a shooter game, regardless of where or when it takes place.[3][4] 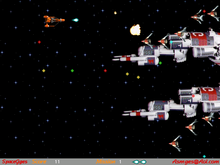 This science fiction video game is a horizontally scrolling shooter which is a specific type of shoot 'em up.

As with nearly all varieties of genre classification, the matter of a specific game's genre is open to subjective interpretation. An individual game may belong to several genres at once.[1]

Early attempts at creating taxological categories for video games were primarily for organizing catalogs and books. A 1981 catalog for the Atari VCS uses 8 headings: Skill Gallery, Space Station, Classics Corner, Adventure Territory, Race Track, Sports Arena, Combat Zone, and Learning Center.[5] ("Classics", in this case, refers to chess and checkers.) In Tom Hirschfeld's 1981 book How to Master the Video Games, he divides the games into broad categories in the table of contents: Space Invaders-type, Asteroids-type, maze, reflex, and miscellaneous.[6] The first two of these correspond to the still-used genres of fixed shooter and multidirectional shooter.

Chris Crawford attempted to classify video games in his 1984 book The Art of Computer Game Design. Crawford primarily focused on the player's experience and activities required for gameplay.[7] He wrote, "the state of computer game design is changing quickly. We would therefore expect the taxonomy presented [in this book] to become obsolete or inadequate in a short time."[8]

Nintendo, in bringing its Famicom system into the North American market as the Nintendo Entertainment System in 1985, looked to avoid the issues with loss of publishing control that had led to the 1983 video game crash and to prevent unauthorized games from being released for the system.[9] To solve this, Nintendo required approval of all games for the NES.[2] To support this, Nintendo classified games into eight major series: Adventure, Action, Sports, Light-Gun, Programmable, Arcade, Robot, and Educational; the series description appeared on early "black box" covers and subsequently used in the NES Player's Guide.[10] By the time of the Game Boy and Super Nintendo Entertainment System, Nintendo had retired the Arcade, Light-Gun, Robot, Programmable, and Educational series, but added in classifications for RPG & Simulation and Puzzle games.[11][12]

Consoles manufacturers that followed the NES followed similar behavior in requiring licenses to develop games for their systems. To assure they would get these licenses, console developers tended to stay with gameplay of previously published games for that console, thus causing groups of games within the same genre to grow.[2][13] Subsequently, retailers displayed games grouped by genres, and market research firms found that players had preferences for certain types over others, based on region, and developers could plan out future strategies through this.[2]

With the industry expanding in the 1990s and budgets for video games began growing, large publishers like Electronic Arts began to form to handle the marketing and publication of games, both for consoles and personal computers. Targeting high-value, low-risk video game genres were key for some publishers, and small and independent developers were typically forced to compete by abandoning more experimental gameplay and settling into the same genres used by larger publishers.[2]

As hardware capabilities have increased, new genres have become possible, with examples being increased memory, the move from 2D to 3D, new peripherals, online functionalities, and location-based mechanics.[2] Experimental gameplay from indie game development drew more attention in the late 2000s and 2010s aided by independent digital distribution, as large publishers focused on triple-A titles were extremely risk-adverse.[14] Through indie games, a revival of experimental gameplay had emerged, and several new genres have emerged since then.[2] 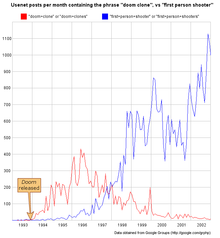 Due to "direct and active participation" of the player, video game genres differ from literary and film genres.[7] Though one could state that Space Invaders is a science fiction video game, author Mark J.P. Wolf wrote that such a classification "ignores the fundamental differences and similarities which are to be found in the player's experience of the game".[7] In contrast to the visual aesthetics of games, which can vary greatly, it is argued that it is interactivity characteristics that are common to all games.[1]

Like film genres, the names of video game genres have come about generally as a common understanding between the audience and the producers.[7] Descriptive names of genres take into account the goals of the game, the protagonist and even the perspective offered to the player. For example, a first-person shooter is a game that is played from a first-person perspective and involves the practice of shooting.[15] Whereas "shooter game" is a genre name, "first-person shooter" and "third-person shooter" are common subgenres of the shooter genre.[16] Other examples of such prefixes are real-time, turn based, top-down and side-scrolling.

Genre names are not fixed and may change over time because of the nature of audience-producer agreement on genre naming. The platform game genre started off as "climbing games", based on Steve Bloom's 1982 book Video Invaders, as they were inspired by games like Donkey Kong that featured ladders and jumping.[17] The same term was used by the US and UK press in 1983, including magazines Electronic Games and TV Gamer.[18][19] First-person shooters were originally known as "Doom clones" in the years following 1993's Doom, while the term "first-person shooters" became more common by around 2000.[20][21]

New genres emerge continuously throughout the history of video games, often due to the cross-pollination of ideas borrowed from different games into new ones. For example, the seminal text adventure game Colossal Cave Adventure directly inspired the Atari VCS game Adventure, but incorporating joystick control as in an action game rather than typed commands. Adventure served as the prototype of the action-adventure game genre that would be popularized by The Legend of Zelda.[22]

The target audience, underlying theme or purpose of a game are sometimes used as a genre identifier, such as with "Christian game" and "serious game" respectively. However, because these terms do not indicate anything about the gameplay of a video game, these are not considered genres.[2]

Video game genres vary in specificity, with popular video game reviews using genre names varying from "action" to "baseball". In this practice, basic themes and more fundamental characteristics are used alongside each other.[23]

Elements of the role-playing genre, which focuses on storytelling and character growth, have been implemented in many different genres of video games. This is because the addition of a story and character enhancement to an action, strategy or puzzle video game does not take away from its core gameplay, but adds an incentive other than survival to the experience.[25]

In addition to gameplay elements, some games may be categorized by other schemes, such are typically not used as genres:[1]

According to some analysts, the percentage of each broad genre in the best-selling physical games worldwide is broken down as follows.[26][27][28]

In the last decade, puzzle games have declined when measured by sales, however, on mobile, where the majority of games are free-to-play, this genre remains the most popular worldwide.[29][30][31]