Landsat photo of the Vistula Lagoon 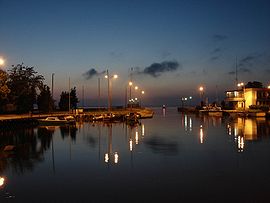 Small port on the Vistula Lagoon in Frombork, Poland

The lagoon is a mouth of a few branches of the Vistula River, notably Nogat and Szkarpawa, and of the Pregolya River. It is connected to Gdańsk Bay by the Strait of Baltiysk.

The Poland–Russia border runs across the lagoon.

Localities on the lagoon include Kaliningrad, Baltiysk, and Primorsk in Russia's Kaliningrad Oblast and Elbląg, Tolkmicko, Frombork, Krynica Morska in Poland. The Polish port of Elbląg used to see a substantial amount of trading traffic on the lagoon, but that has declined owing to the current border situation and silting. Kaliningrad and Baltiysk are currently major seaports on the lagoon.

It is an endangered Important Bird Area of Poland.[2]

The earliest version of the name of the Vistula Lagoon has been recorded in historical sources by Wulfstan of Hedeby at the end of the 9th Century as Estmere.[3] It is an Anglo-Saxon rendition of the Old Prussian Aīstinmari, which was the name for the lagoon. The name was the fusion of two Old Prussian words:

So, the oldest known meaning of the name of the Vistula Lagoon was "The lagoon or sea of the Aesti". The Old Prussian name is still used in Modern Lithuanian as Aistmarės, which preserves the original meaning.

Over three hundred years later, in the first half of the 13th Century, the name of the Vistula Lagoon occurs in deeds issued by the Teutonic Order in Latin as Mare Recens (1246 - "mare" - a pool or lake or sea and "recens" - fresh) in contrast to the contemporaneous name for the Baltic Sea - Mare Salsum (Salty Sea). Then in 1251 there is a reference to Mare Recens et Neriam and finally in 1288 Recenti Mari Hab, which evidently corresponds with the German "Frisches Haff".[5]

From the first half of the 13th c. the lagoon was part of the State of the Teutonic Order, then Ducal Prussia and eventually the Kingdom of Prussia, which became part of the German Empire in 1871. From 1466 to 1772 its western part belonged to the Polish province of Royal Prussia, and from 1920 to 1939 it was split between Germany and the Free City of Danzig. Since 1945 its eastern part belongs to the Russian (formerly USSR) Kaliningrad Oblast, and Poland has 43.8% of its area on the western side bordering the Pomeranian and Warmian-Masurian voivodships. 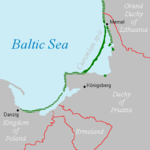 While today the Kursenieki, also known as Kuršininkai are a nearly extinct Baltic ethnic group living along the Curonian Spit, in 1649 Kuršininkai settlement spanned from Memel (Klaipėda) to Danzig (Gdańsk), including the area around the Vistula Lagoon. The Kuršininkai were eventually assimilated by the Germans, except along the Curonian Spit where some still live. The Kuršininkai were considered Latvians until after World War I when Latvia gained independence from the Russian Empire, a consideration based on linguistic arguments. This was the rationale for Latvian claims over the Curonian Spit, Memel, and other territories of East Prussia which would be later dropped.

Historical events related to the lagoon

From January until March 1945, throughout the evacuation of East Prussia, refugees from East Prussia crossed the frozen lagoon on their way west after the Red Army reached the coast of the lagoon near Elbing on January 26. Attacked by Soviet aircraft, thousands of these refugees were killed or fell through the broken ice.[6][7]