A voivodeship (/ˈvɔɪvoʊdʃɪp/; Polish: województwo [vɔjɛˈvut͡stfɔ]; plural: województwa) is the highest-level administrative division of Poland, corresponding to a province in many other countries. The term has been in use since the 14th century, and is commonly translated in English as "province" or "state".[1]

The Polish local government reforms adopted in 1998, which went into effect on 1 January 1999, created 16 new voivodeships. These replaced the 49 former voivodeships that had existed from 1 July 1975, and bear greater resemblance (in territory but not in name) to the voivodeships that existed between 1950 and 1975.

Administrative authority at the voivodeship level is shared between a government-appointed governor called a voivode (wojewoda), an elected assembly called a sejmik, and an executive board (zarząd województwa) chosen by that assembly, headed by a voivodeship marshal (marszałek województwa). Voivodeships are further divided into powiats (counties) and gminas (communes or municipalities): see Administrative divisions of Poland.

Etymology and use of "voivodeship"

Some English-language sources, in historic contexts, speak of "palatinates" rather than "voivodeships". The term "palatinate" traces back to the Latin palatinus ("palatine").

More commonly used now is "province" or "voivodeship". The latter is a loanword-calque hybrid formed on the Polish "województwo".

Some writers argue against rendering "województwo" in English as "province" on historic grounds. Before the Third and last Partition of the Polish–Lithuanian Commonwealth, which occurred in 1795, each of the main constituent Regions of the Polish–Lithuanian Commonwealth—Greater Poland, Lesser Poland, Lithuania, and Royal Prussia—was sometimes idiosyncratically referred to as a "Province" ("prowincja"). According to the argument, a "Province" (such as Greater Poland) cannot consist of a number of subdivisions ("województwa", the plural of "województwo") that are likewise called "provinces". However, this is an antiquarian consideration, since "province" has not been used in this sense in Poland for over two centuries, and in any case the former larger political units—all now obsolete—can be referred to in English as "Regions" (which, in English parlance, is what they were).

The Polish "województwo", designating a second-tier Polish or Polish–Lithuanian administrative unit, derives from "wojewoda" (etymologically, a "warlord", "war leader" or "leader of warriors", but now simply the governor of a województwo) and the suffix "-ztwo" (a "state or condition").

The English "voivodeship", which is a hybrid of the loanword "voivode" and "-ship" (the latter a suffix that calques the Polish suffix "-ztwo"), has never been much used and is absent from many dictionaries. According to the Oxford English Dictionary, it first appeared in 1792, spelled "woiwodship", in the sense of "the district or province governed by a voivode." The word subsequently appeared in 1886 also in the sense of "the office or dignity of a voivode."[2]

Poland's Commission on Standardization of Geographic Names outside the Republic of Poland, recommends the spelling "voivodship", without the e.[1] 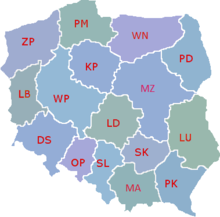 Map of Polish voivodeships since 1999 (abbreviations)

Competences and powers at voivodeship level are shared between the voivode (governor), the sejmik (regional assembly) and the marshal. In most cases these institutions are all based in one city, but in Kuyavian-Pomeranian and Lubusz Voivodeship the voivode's offices are in a different city from those of the executive and the sejmik. Voivodeship capitals are listed in the table below.

The voivode is appointed by the Prime Minister and is the regional representative of the central government. The voivode acts as the head of central government institutions at regional level (such as the police and fire services, passport offices, and various inspectorates), manages central government property in the region, oversees the functioning of local government, coordinates actions in the field of public safety and environment protection, and exercises special powers in emergencies. The voivode's offices collectively are known as the urząd wojewódzki.[citation needed]

The sejmik is elected every five years (2018 was the start of the first five-year term; previous terms lasted four years[3]), at the same time as the local authorities at powiat and gmina level. It passes by-laws, including the voivodeship's development strategies and budget. It also elects the marszałek and other members of the executive, and holds them to account.

The executive (zarząd województwa), headed by the marszałek drafts the budget and development strategies, implements the resolutions of the sejmik, manages the voivodeship's property, and deals with many aspects of regional policy, including management of European Union funding. The marshal's offices are collectively known as the urząd marszałkowski. 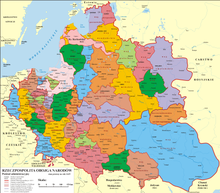 Polish–Lithuanian Commonwealth in 1619, around the time of Commonwealth's greatest extent 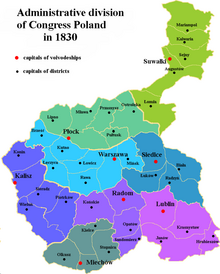 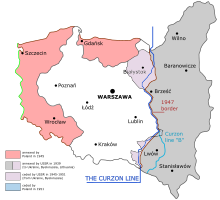 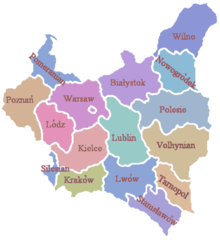 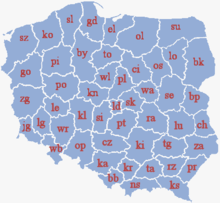 The administrative division of Poland in the interwar period included 16 voivodeships and Warsaw (with voivodeship rights). The voivodeships that remained in Poland after World War II as a result of Polish–Soviet border agreement of August 1945 were very similar to the current voivodeships.

Collapsed list of car plates since 1937, please use table-sort buttons.

After World War II, the new administrative division of the country within the new national borders was based on the prewar one and included 14 (+2) voivodeships, then 17 (+5). The voivodeships in the east that had not been annexed by the Soviet Union had their borders left almost unchanged. The newly acquired territories in the west and north were organized into the new voivodeships of Szczecin, Wrocław and Olsztyn, and partly joined to Gdańsk, Katowice and Poznań voivodeships. Two cities were granted voivodeship status: Warsaw and Łódź.

See also: Subdivisions of the Polish People's Republic and Voivodeships of Poland (1975–98)