The Waitaki River is a large braided river that drains the Mackenzie Basin and runs some 209 kilometres (130 mi) south-east to enter the Pacific Ocean between Timaru and Oamaru on the east coast of the South Island of New Zealand. It starts at the confluence of the Ōhau River and the Tekapo River, now in the head of the artificial Lake Benmore, these rivers being fed by three large glacial lakes, Pukaki, Tekapo, and Ōhau at the base of the Southern Alps. The Waitaki flows through Lake Benmore, Lake Aviemore and Lake Waitaki, these lakes being contained by hydroelectric dams, Benmore Dam, Aviemore Dam and Waitaki Dam.[1] The Waitaki has several tributaries, notably the Ahuriri River and the Hakataramea River. It passes Kurow and Glenavy before entering the Pacific Ocean. The River lends its name the Waitaki District on the south side of the river bank.

The river's flow is normally low in winter, with flows increasing in spring when the snow cloaking the Southern Alps begins to melt, with flows throughout the summer being rainfall dependent and then declining in the autumn as the colder weather begins to freeze the smaller streams and streams which feed the catchment. The median flow of the Waitaki River at Kurow is 356 cubic metres per second (12,600 cu ft/s).[2]

The first major infrastructure improvements to the river were made between 1881 and 1914 with the construction of road and rail bridges at Kurow and Waitaki Bridge.

The middle of the river bed formed a traditional political boundary between Canterbury and Otago. The term "south of the Waitaki" is often used to refer to the Otago and Southland regions as one common area (the two regions share historical and ethnic relationships which make them distinct from the regions to the north of them).

The river is popular for recreational fishing and jetboating.

The river is the site of many hydroelectricity projects. The Waitaki Hydro Scheme, which includes several large dams, is one of the largest hydroelectric projects in the nation.

The Waitaki dam was built first, between 1928 and 1934, and without earth-moving machinery, followed by the development of the Aviemore Dam which created Lake Aviemore, and then Benmore Dam which created Lake Benmore. Lake Pukaki was initially dammed at this stage to provide storage and flow control. A small station was also installed on Lake Tekapo, with water taken through a 1.6 km (1 mi) tunnel to a power station below the level of the lake.

The original Waitaki power stations discharge water back into the Waitaki River which then forms a storage lake for the next station in the chain.

In the 1960s, work was started on the Upper Waitaki project. This project consisted of taking the discharge from the original Tekapo (A) station through the Tekapo Canal, to Tekapo B station at the edge of Lake Pukaki. The dam at Pukaki was increased in height. Water from Pukaki is then transferred into the Pukaki Canal which meets the Ohau Canal from Lake Ōhau into Ohau A station and Lake Ruataniwha. The Ohau Canal continues beyond Lake Ruataniwha to Ohau B midway along, before emptying through Ohau C into Lake Benmore. 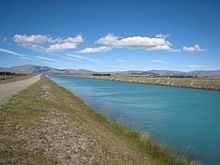 The stations are (commissioned/capacity/annual output):

In 2001 a proposal for a new series of canals and dams was made by Meridian Energy for irrigation and electricity generation on the river.[4] This scheme, known as Project Aqua, planned to divert up to 77 percent of the lower river's flow to create a hydroelectric scheme, but these plans were dropped in March 2004. Lack of commercial viability was given as the major reason for the scheme's shelving, although strenuous public protest may also have been a major contributing factor.[5] A more modest successor scheme, the North Bank tunnel looked likely to proceed, with water rights being granted in 2009,[6] but land access negotiations were suspended in January 2013 due to flat demand for electricity forecast for the next five years.