Wanaka /ˈwɒnəkə/ (Māori: Wānaka), called Pembroke by post-colonial inhabitants until 1940,[2] is a popular ski and summer resort town in the Otago region of the South Island of New Zealand. At the southern end of Lake Wānaka, it is at the start of the Clutha River / Mata-Au and is the gateway to Mount Aspiring National Park.

Wanaka is primarily a resort town with both summer and winter seasons. Its economy is based on the many outdoor opportunities this offers.

Historically, Māori visited the Wānaka area to hunt and fish in summer, or on their way to seek pounamu (greenstone) on the West Coast. Ngāi Tahu abandoned their seasonal camps after a raid by a North Island war party in 1836.

The current town was founded during the gold rush of the 19th century. Along with the rest of the Queenstown-Lakes District, Wanaka is growing rapidly, with the population increasing by 50% between 2005 and 2015.

"Wānaka" is the South Island dialect pronunciation of wānanga, which means sacred knowledge or a place of learning.[3] The New Zealand Gazetteer cites the meaning as "the lore of the tohunga or priest".[4]

While the name could also be a variation of Ō-Anake or Ō-Anaka, a proper name,[3] Ngāi Tahu's atlas Ka Huru Manu dismisses this variation as a simple spelling mistake.[5]

A Kāti Māmoe settlement at the site of modern Wanaka was Para karehu.[6]

The town was named "Wanaka" when it was first surveyed in 1863, but renamed "Pembroke" within a month of the surveyor returning his books to Dunedin. Pembroke was the family name of the Hon Sydney Herbert,[7] a UK Cabinet Minister and member of the Canterbury Association.

The town's name reverted to "Wanaka" on 1 September 1940, to reduce confusion between the names of the town and the lake.[7] Although the official name of the lake was updated from "Lake Wanaka" to "Lake Wānaka" in 2019,[4] the town is still spelt as "Wanaka" with no macron.

A Kāti Māmoe settlement at the site of modern Wanaka was named Para karehu.[6]

The area was invaded by the Ngāi Tahu in the early 18th century.[6] Ngai Tahu visited annually, seeking greenstone in the mountains above the Haast River and hunting eels and birds over summer, then returning to the east coast by descending the Clutha River / Mata-Au in reed boats called mōkihi.[8][9]

Ngāi Tahu use of the land was ended by attacks by North Island tribes. In 1836, the Ngāti Tama chief Te Puoho led a 100-person war party, armed with muskets, down the West Coast and over the Haast Pass: they fell on the Ngāi Tahu encampment between Lake Wānaka and Lake Hāwea, capturing 10 people and killing and eating two children.[10] Some of the Ngāi Tahu fled down the Waitaki river to the coast; Te Puoho took his captives over the Crown Range to Lake Wakatipu and thence to Southland where he was killed and his war party destroyed by the southern Ngāi Tahu leader Tuhawaiki.[11]

The first European to visit the area was Nathaniel Chalmers, who was guided inland by Chiefs Reko and Kaikoura in 1853.[12] Reko and Kaikoura showed Chalmers the rock bridge "Whatatorere" at Roaring Meg, which was the only place that the Kawarau River could be jumped over,[13] and returned him down the Clutha in a mōkihi reed boat.

European settlement began in the Upper Clutha River Valley in the 1850s, with the establishment of sheep stations by runholders. The first station was at Albert Town, the only place where settlers could ford the Clutha River. The present site of Wanaka was first surveyed in 1863.[2] Settlement increased in Pembroke during the 1870s because of timber milling in the Matukituki Valley that used Lake Wānaka for transport.

Mass tourism began in 1867 when Theodore Russell opened the first hotel, and with the world's first sheepdog trials.[14]

Wanaka proved a very popular tourist destination because of its borderline continental climate and easy access to snow and water.[15] 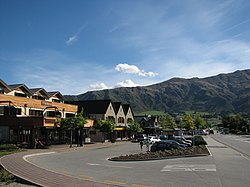 The town of Wanaka is situated at the southern end of Lake Wānaka, surrounded by mountains. To the southwest is the Crown Range and town of Queenstown (120 kilometres (75 mi)); to the north the Haast Pass cuts through the Southern Alps near Makarora. To the northeast are the towns of Omarama and Twizel. Very close to Lake Wānaka is Lake Hāwea, in a parallel glacial valley, which has a recently developed settlement of about 1,500 people. To the south of the town lies more of the Southern Alps. The Glendhu Bay motorpark is close to the town, leading into the Matukituki River valley which gives access to the Mount Aspiring National Park.

The centre of the town lies on flat land beside Roy's Bay. Parts of the town have expanded into the hills surrounding the centre and around Roy's Bay in both directions. The lakeside area of the town is prone to occasional flooding in spring when heavy rain and snowmelt can cause the lake to rise quickly, as in November 1999.[16][17]

Despite New Zealand's mostly oceanic climate, Wanaka is one of the few areas in the country to enjoy a semi-continental climate, with four distinct seasons. The weather is fairly dry, with spring (September–December) being the wettest season. Annual rainfall is 682 mm which is half the national average. Wanaka's summers are warm, with temperatures reaching the high 20s and an average summer maximum of 24 °C (75 °F). Wanaka's highest-ever temperature of 35.2 °C (95.4 °F) was recorded in January 2018.[18]

Winter can be extreme by New Zealand standards with temperature mostly in the single digits during the day time followed by cold and frosty nights and frequent snowfalls.

In terms of ethnicity, 92.6% were European/Pākehā, 5.1% were Māori, 0.5% were Pacific peoples, 4.5% were Asian, and 2.5% were other ethnicities (totals add to more than 100% since people could identify with multiple ethnicities).

The area around Wanaka is a formal sub-region of the Central Otago wine region with several top wineries and vineyards. As with other parts of the wine region, the main grape variety in the area is pinot noir. 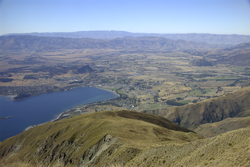 View of Wanaka from Mt Roy.

With its lake and mountain views, Wanaka has become a popular tourist resort, considered less commercialised than Queenstown.[24]

Wanaka boasts a growing number of restaurants, cafes and a diverse nightlife. Other attractions in the town include Puzzling World and the Paradiso Cinema. Puzzling World contains a maze, optical illusions and a leaning clocktower.[25] The Paradiso is a classic old cinema, with seating consisting of old couches and an in-theatre Morris Minor.[26] There are several wineries in the area. Just out of town next to the Wanaka Airport is the National Transport and Toy Museum.

In winter, Wanaka is an excellent place to see the Southern Lights.[27]

A number of mountains surrounding Wanaka can be climbed, including Roys Peak, Mount Iron, Mount Grand and the Pisa Range, all of which provide views of the surrounding area.

That Wanaka Tree - a willow growing just inside the lake - is a tourist attraction in its own right, featuring on many tourists' Instagram feeds.[28] The tree had its lower branches cut by vandals in 2020.[29]

Aerial panorama of the town

The Wanaka region has been the setting for many international films, including The Lord of the Rings,[35] The Hobbit,[36] the Legend of S,[37] and A Wrinkle in Time.[38]

That Wanaka Tree in summer

Wanaka is host to outdoor recreation and tourism activities with hiking, mountain biking, mountaineering, rock climbing, fishing, paragliding, kayaking, rafting, jetboating, and environmental activities. Wanaka has a sunny climate and serves as an access point to the highest New Zealand mountain outside of the Mount Cook region: Mount Aspiring/Tititea.

Mount Aspiring National Park is popular for mountaineering and hiking. Tourists enjoy day trips into the park and many tourists go hiking in the park for up to a week at a time. Parts of the Matukituki Valley on the road to the park are popular for rock climbing, and for day walks.

Lake Wānaka itself is popular for waterskiing, wakeboarding and sailing. This along with the local rivers provide many opportunities for fishing. There is a dedicated mountain biking area made by volunteers in a local pine forest.[39] Adjacent to the bike park is an 18-hole disc golf course. All the local ski resorts are open for mountain biking and hiking in the summer.

That Wanaka Tree close to winter

Tramping to the summit of Treble Cone

Wanaka has the broadest range of snow activity choices of any town in New Zealand. These include Treble Cone, Cardrona Alpine Resort and Snow Farm, some of New Zealand's premier commercial ski fields. Wanaka is the main accommodation provider for these resorts and so is very busy in high season (July–September).

Winter in Wanaka is also the home to a variety of winter sporting events including everything from the annual free Winter Games to The Merino Muster.

Treble Cone has good lift-accessed terrain and for this reason has become popular amongst visitors, 'ConeHeads'.[40] It also catches some of the better snow in the area, with its location and orientation getting more snow from NW storms.

Cardrona is more attractive to families and beginners, though an attempt has been made at the park riding population in competition with SnowPark.[41] Snowpark is a dedicated 100% artificial terrain park for advanced riders. Snow Farm is New Zealand's only commercial cross-country ski field.

Cardrona also hosts one of the few Olympic sized halfpipes in the world and has been used for practice for Olympic competition.[42]

Nationally, Wanaka is part of the Waitaki electorate, represented by the New Zealand National Party's Jacqui Dean since 2005.[43]

Wanaka's local governments are the Queenstown-Lakes District Council[44] and the Otago Regional Council.[45]

Wanaka is served by the Wanaka Airport as well as by roads over the Crown Range, through the Haast Pass to the West Coast, to Mount Cook Village via the Lindis Pass to the north, and south through Cromwell by State Highway 6. There are daily bus services to Christchurch, Dunedin, Queenstown, Invercargill and Greymouth.

During the early 20th century an unsuccessful proposal was made for the Otago Central Railway, then terminated at Cromwell, to be extended to Wanaka and onward to Lake Hāwea.[49] The main reason for NZR's reluctance was having to cross the Clutha River twice. A more direct route to Hāwea was planned but dropped due to cost.

Chalmers' Cottage is a grade 2 listed building. It was built in the 1870s for Archibald Chalmers, who was a butcher based in Wanaka.[51]

The Wanaka War Memorial overlooks the town and the lake. (July 2021)