For the town in England, see Warrington.

Warrington, known in Māori as Ōkāhau,[2] is a small settlement on the coast of Otago, in the South Island of New Zealand. It is situated close to the northern shore of Blueskin Bay, an area of mudflats north of Dunedin, and is administered as part of Dunedin City. Warrington is 3 km (1.9 mi) from State Highway 1 linked by Coast Road. The Main South Line railway passes through the township and a tourist train, the Seasider passes through the settlement once or twice a week between Dunedin and Palmerston. 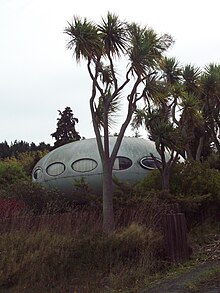 A Futuro house in Warrington

Warrington beach, a popular surf beach for locals and visitors from the city, is patrolled by volunteer lifeguards of the Warrington Surf Life Saving Club which established in Dunedin in 1957 and relocated here in 1976.[5]

St Barnabas Church is one of the area's oldest buildings.