Wright Stephenson was a stock and station agency founded in Dunedin, New Zealand, in 1861. 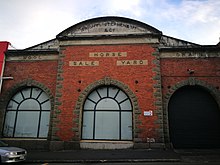 The business was begun in 1861 as Wright, Robertson, & Co. by partners John T. Wright and Robert M. Robertson as a result of a population boom fueled by the Otago Gold Rush. Robertson left in 1868 and was replaced by auctioneer John Stephenson. Wright and Stephenson retired from the company in 1899. Due to significant growth in the volume of its business activities, ownership was switched to a public listed company in 1906.[1][2]

By 1972, just before merging with National Mortgage and Agency Company of New Zealand (NMA), it had developed 27 stock and station branches throughout New Zealand with more than 100 further sub-branches and agencies to service farming areas throughout the country. As well, by the time of its centenary in 1961, the company had established managerial offices in Melbourne and London, 15 sub-branches in Australia, and 4 sub-branches in Britain.

After the merger with NMA, the company was known from 23 March 1972 as NMA Wright Stephenson Holdings Limited until 1973 when the name Challenge Corporation was assumed.[3][2]

Following the January 1981 merger of Challenge with Fletcher Holdings and Tasman Pulp and Paper — which did not provide the desired financial stability — the Fletcher Challenge group was demerged in 2001.

The stock and station agency operations now form a core part of the business PGG Wrightson.

On behalf of its farming clients, Wright Stephenson handled the sale and auction of livestock, wool, land, grain and seed as well as provided services to meet a range of agricultural and pastoral requirements.[2] The company also promoted local livestock by supporting national shows, breed societies, and pastoral associations.[1]

Working capital and capital was provided to the farming industry together with advice on farm accounting, budgeting, taxation and estate planning.[2]

To dilute the seasonal and cyclical nature of their activities in the wool trade, Wright Stephenson developed extensive interests held in: