The Société nationale des chemins de fer français (French pronunciation: ​[sɔsjete nɑsjɔnal de ʃ(ə)mɛ̃ d(ə) fɛʁ fʁɑ̃sɛ]; abbreviated as SNCF [ɛs‿ɛn se ɛf]; meaning "National Company of French Railways") is France's national state-owned railway company. Founded in 1938, it operates the country's national rail traffic along with Monaco, including the TGV, on France's high-speed rail network. Its functions include operation of railway services for passengers and freight (through its subsidiaries SNCF Voyageurs and Rail Logistics Europe), as well as maintenance and signalling of rail infrastructure (SNCF Réseau). The railway network consists of about 35,000 km (22,000 mi) of route, of which 2,600 km (1,600 mi) are high-speed lines and 14,500 km (9,000 mi) electrified. About 14,000 trains are operated daily.

In 2010 the SNCF was ranked 22nd in France and 214th globally on the Fortune Global 500 list.[2] It is the main business of the SNCF Group, which in 2020 had €30 billion of sales in 120 countries.[3] The SNCF Group employs more than 275,000 employees in France and around the world.[4] Since July 2013, the SNCF Group headquarters are located in a Parisian suburb at 2 Place aux Étoiles in Saint-Denis. The president of SNCF Group has been Jean-Pierre Farandou since 2019.

A high-speed train TGV Duplex from the SNCF

SNCF operates almost all of France's railway traffic, including the TGV (Train à Grande Vitesse, meaning "high-speed train"). In the 1970s, the SNCF began the TGV high-speed train program with the intention of creating the world's fastest railway network. It came to fruition in 1981 with the completion of the first high-speed line LGV Sud-Est ("Ligne à Grande Vitesse Sud-Est", meaning "southeast high-speed line"), where the first TGV service, from Paris to Lyon, was inaugurated. In 2017, the national rail network owned by SNCF Réseau had 28,710 km (17,839 mi) of lines, 58% of which were electrified and 2,640 high-speed lines. Every day, the SNCF runs 15,000 commercial trains and transports more than 5 million passengers and more than 250,000 tonnes of goods.[5] TGV lines and TGV technology are now spread across several European countries.

The SNCF's TGV has set many world speed records, the most recent on 3 April 2007, when a new version of the TGV dubbed the V150 with larger wheels than the usual TGV, was able to cover more ground with each rotation and had a stronger 18,600-kilowatt (24,900-horsepower) engine, and broke the world speed record for conventional railway trains, reaching 574.8 km/h (357.2 mph).

The SNCF has a remarkable safety record. After nearly 30 years in operation, SNCF's TGV system has only experienced one fatal accident, which occurred during pre-opening testing and not in regular operation.

In 2011 SNCF in partnership with Keolis, unsuccessfully bid for the InterCity West Coast franchise.[6] In April 2017 SNCF took a 30% shareholding in a joint venture with Stagecoach Group and Virgin Group to bid for the West Coast Partnership that will operate services on the West Coast Main Line from May 2020 and the High Speed 2 line from 2026.[7][8]

In April 2019 Stagecoach were banned from bidding for any franchises including the West Coast Partnership which has meant that Virgin and SNCF have now had to withdraw from the shortlist.

SNCF has employees in 120 countries offering extensive overseas and cross border consulting. Those projects include:

SNCF was formed in 1938 with the nationalisation of France's main railway companies (Chemin de fer, literally, 'way of iron', means railway). These were the:

The French state originally took 51% ownership of SNCF and invested large amounts of public subsidies into the system. Today, SNCF is wholly owned by the French state.

Following the 1940 Armistice and until August 1944, SNCF was requisitioned for the transport of German armed forces and armaments. The invading German troops were responsible for the destruction of nearly 350 French railway bridges and tunnels. According to differing estimates, SNCF surrendered between 125,000 and 213,000 wagons and 1,000-2,000 locomotives.[9][10] 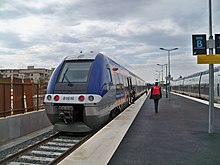 France's railway infrastructure and rolling stocks were a target for the French Resistance aimed at disrupting and fighting the German occupying forces.[11][12] This allowed SNCF employees to perform many acts of resistance,[13] including the formation of the Résistance-Fer movement in 1943. Nearly 1,700 SNCF railway workers were killed or deported for resisting Nazi orders.[14][15] 150 Résistance-Fer agents were shot for their acts of resistance, 500 of them were deported. Half of those deported died in concentration camps.[16]

German occupying forces in France also requisitioned SNCF to transport nearly 77,000 Jews and other Holocaust victims to Nazi extermination camps.[17][18] These deportations have been the subject of historical controversy and lawsuits (such as the Lipietz case) in France as well as in the United States (where subsidiary Keolis is a transportation contractor) to the present day.[15][19]

In 1992 SNCF commissioned French academics to write a history of SNCF activities during World War II. The resultant report was published in 1996.[20][21]

More recently, some sources have claimed that SNCF billed Nazi-occupied France for third-class tickets for Holocaust victims transported to extermination camps,[22][23] although passengers were transported in cattle cars.[24] Other sources have reported that after the liberation of France SNCF continued to seek payment for transporting Holocaust victims to Germany.[22][25] However, historian Michael Marrus has written that claims that SNCF billed for third-class tickets and continued to seek payment after the war ended were made as part of a legal case brought against SNCF, and did not match with historians' understanding of what happened. Marrus argues that SNCF had no margin of maneuver during the German occupation and that the actions of SNCF employees were not ideologically motivated.[18] According to Serge Klarsfeld, president of the organization Sons and Daughters of Jewish Deportees from France, SNCF was forced by German and Vichy authorities to cooperate in providing transport for French Jews to the border and did not make any profit from this transport.[26]

In December 2014, SNCF agreed to pay up to $60 million worth of compensation to Holocaust survivors in the United States.[27] It corresponds to approximately $100,000 per survivor.[28]

In May 2014, the company had discovered that 2,000 new trains they ordered at a cost of 15 billion euros are too wide for many of France's regional platforms, Construction work has already started to reconfigure them.[29]

On 1 January 2015, Réseau ferré de France (RFF) merged with SNCF Infra and the Direction de la circulation ferroviaire (DCF) and became SNCF Réseau, the operational assets of SNCF became SNCF Mobilités, and both groups were placed under the control of SNCF.

The industrial designer Paul Arzens styled many of SNCF's locomotives from the 1940s until the 1970s. A particularly distinctive type is the "broken nose" style of electric and diesel locomotives.

Continental Airlines discontinued its codeshare with SNCF on 15 August 2010.[30] 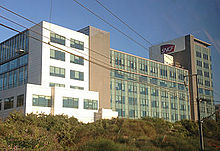 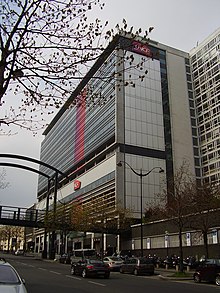 The SNCF's former headquarters in the Montparnasse neighborhood

Until 1999, the SNCF's historic headquarters was located at 88 Rue Saint-Lazare in the 9th arrondissement.[31][32] In 1996 the chairman of SNCF, Louis Gallois, announced that SNCF would move its headquarters to a new location during the middle of 1997.[33]

From 1999 to 2013, SNCF's headquarters were located in the Montparnasse neighborhood of the 14th arrondissement of Paris,[34] located near the Gare Montparnasse.[31]

Since July 2013, the SNCF headquarters are located in the Parisian suburb of Saint-Denis at 2, place aux Étoiles, 93200 Saint Denis.[citation needed] The move was motivated by cutting operating costs by 10 million euros per year.[35]

Since 1 January 2020 SNCF is a state-owned group consisting of a parent company (SNCF) with several independently operated subsidiaries: 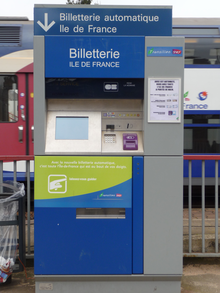 A SNCF ticket machine at the Épône-Mézières station

SNCF has full or partial shares in a large number of companies, the majority of which are rail or transport related. These include:[36]

According to a TNS SOFRES survey published in 2010, 66% of French people have a good image of SNCF.[40] At the end of 2019, this proportion was measured at 50% by the Posternak-Ifop barometer on the image of companies.[41] In 2020, Eight Advisory and IFOP unveil their ranking of the "most admired French companies": SNCF is in 23rd position.[42]

Safety on trains is also often a priority. To do this, around 2,800 railway workers form the Railway Security, the general supervision of SNCF, of which 50% of the workforce is assigned to the Île-de-France region.

Furthermore, the experts of the BCG, Boston Consulting Group , use to compare the rail systems in 25 European countries. They rank France in tied 4th position (with Germany, Austria and Sweden), behind Switzerland, Denmark and Finland. The criteria are : the utilization rate, quality of service and safety.[43]

SNCF's current visual logo was created in 2005 by the Carré Noir agency, a subsidiary of the Publicis communication group. It was slightly reworked in 2011: rounded corners, disappearance of shadows inside the letters as well as behind, and a clearer separation between them.

Since the Auguste and Louis Lumière's first film, SNCF has been the company that hosts the most film shoots in France,[48] between 50 and 60 shoots per year, which represents around two thirds of French productions.[49] Here is a selection of iconic films where SNCF is at the heart of the matter: