The World Geodetic System (WGS) is a standard for use in cartography, geodesy, and satellite navigation including GPS. This standard includes the definition of the coordinate system's fundamental and derived constants, the ellipsoidal (normal) Earth Gravitational Model (EGM), a description of the associated World Magnetic Model (WMM), and a current list of local datum transformations.[1]

The latest revision is WGS 84 (also known as WGS 1984, EPSG:4326), established and maintained by the United States National Geospatial-Intelligence Agency since 1984, and last revised in 2014.[2] Earlier schemes included WGS 72, WGS 66, and WGS 60. WGS 84 is the reference coordinate system used by the Global Positioning System.

The coordinate origin of WGS 84 is meant to be located at the Earth's center of mass; the uncertainty is believed to be less than 2 cm.[5]

The WGS 84 meridian of zero longitude is the IERS Reference Meridian,[6] 5.3 arc seconds or 102 metres (335 ft) east of the Greenwich meridian at the latitude of the Royal Observatory.[7][8]

Currently, WGS 84 uses the Earth Gravitational Model 2008.[10] This geoid defines the nominal sea level surface by means of a spherical harmonics series of degree 2160.[11] It is an improvement over the 1996 EGM96 model, which was in turn an improvement over the original WGS 84 geoid, referred to as EGM84. The deviations of the EGM96 geoid from the WGS 84 reference ellipsoid range from about −105 m to about +85 m.[12]

A unified geodetic system for the whole world became essential in the 1950s for several reasons:

In the late 1950s, the United States Department of Defense, together with scientists of other institutions and countries, began to develop the needed world system to which geodetic data could be referred and compatibility established between the coordinates of widely separated sites of interest. Efforts of the U.S. Army, Navy and Air Force were combined leading to the DoD World Geodetic System 1960 (WGS 60). The term datum as used here refers to a smooth surface somewhat arbitrarily defined as zero elevation, consistent with a set of surveyor's measures of distances between various stations, and differences in elevation, all reduced to a grid of latitudes, longitudes, and elevations. Heritage surveying methods found elevation differences from a local horizontal determined by the spirit level, plumb line, or an equivalent device that depends on the local gravity field (see physical geodesy). As a result, the elevations in the data are referenced to the geoid, a surface that is not readily found using satellite geodesy. The latter observational method is more suitable for global mapping. Therefore, a motivation, and a substantial problem in the WGS and similar work is to patch together data that were not only made separately, for different regions, but to re-reference the elevations to an ellipsoid model rather than to the geoid. 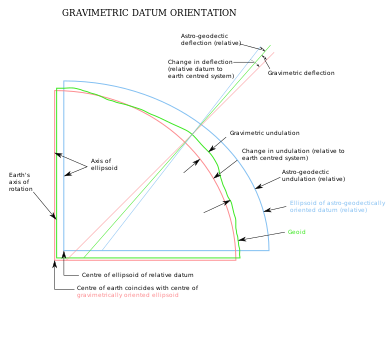 In accomplishing WGS 60, a combination of available surface gravity data, astro-geodetic data and results from HIRAN [14] and Canadian SHORAN surveys were used to define a best-fitting ellipsoid and an earth-centered orientation for each of initially selected datum. (Every datum is relatively oriented with respect to different portions of the geoid by the astro-geodetic methods already described.) The sole contribution of satellite data to the development of WGS 60 was a value for the ellipsoid flattening which was obtained from the nodal motion of a satellite.

Prior to WGS 60, the U.S. Army and U.S. Air Force had each developed a world system by using different approaches to the gravimetric datum orientation method. To determine their gravimetric orientation parameters, the Air Force used the mean of the differences between the gravimetric and astro-geodetic deflections and geoid heights (undulations) at specifically selected stations in the areas of the major datums. The Army performed an adjustment to minimize the difference between astro-geodetic and gravimetric geoids. By matching the relative astro-geodetic geoids of the selected datums with an earth-centered gravimetric geoid, the selected datums were reduced to an earth-centered orientation. Since the Army and Air Force systems agreed remarkably well for the NAD, ED and TD areas, they were consolidated and became WGS 60.

Improvements to the global system included the Astrogeoid of Irene Fischer and the astronautic Mercury datum. In January 1966, a World Geodetic System Committee composed of representatives from the United States Army, Navy and Air Force was charged with developing an improved WGS, needed to satisfy mapping, charting and geodetic requirements. Additional surface gravity observations, results from the extension of triangulation and trilateration networks, and large amounts of Doppler and optical satellite data had become available since the development of WGS 60. Using the additional data and improved techniques, WGS 66 was produced which served DoD needs for about five years after its implementation in 1967. The defining parameters of the WGS 66 Ellipsoid were the flattening (1/298.25 determined from satellite data) and the semimajor axis (6378145 m determined from a combination of Doppler satellite and astro-geodetic data). A worldwide 5° × 5° mean free air gravity anomaly field provided the basic data for producing the WGS 66 gravimetric geoid. Also, a geoid referenced to the WGS 66 Ellipsoid was derived from available astrogeodetic data to provide a detailed representation of limited land areas.

After an extensive effort over a period of approximately three years, the Department of Defense World Geodetic System 1972 was completed. Selected satellite, surface gravity and astrogeodetic data available through 1972 from both DoD and non-DoD sources were used in a Unified WGS Solution (a large scale least squares adjustment). The results of the adjustment consisted of corrections to initial station coordinates and coefficients of the gravitational field.

The astrogeodetic data in its basic form consists of deflection of the vertical components referred to the various national geodetic datums. These deflection values were integrated into astrogeodetic geoid charts referred to these national datums. The geoid heights contributed to the Unified WGS Solution by providing additional and more detailed data for land areas. Conventional ground survey data was included in the solution to enforce a consistent adjustment of the coordinates of neighboring observation sites of the BC-4, SECOR, Doppler and Baker–Nunn systems. Also, eight geodimeter long line precise traverses were included for the purpose of controlling the scale of the solution.

The Unified WGS Solution, as stated above, was a solution for geodetic positions and associated parameters of the gravitational field based on an optimum combination of available data. The WGS 72 ellipsoid parameters, datum shifts and other associated constants were derived separately. For the unified solution, a normal equation matrix was formed based on each of the mentioned data sets. Then, the individual normal equation matrices were combined and the resultant matrix solved to obtain the positions and the parameters.

The value for the semimajor axis (a) of the WGS 72 Ellipsoid is 6378135 m. The adoption of an a-value 10 meters smaller than that for the WGS 66 Ellipsoid was based on several calculations and indicators including a combination of satellite and surface gravity data for position and gravitational field determinations. Sets of satellite derived station coordinates and gravimetric deflection of the vertical and geoid height data were used to determine local-to-geocentric datum shifts, datum rotation parameters, a datum scale parameter and a value for the semimajor axis of the WGS Ellipsoid. Eight solutions were made with the various sets of input data, both from an investigative point of view and also because of the limited number of unknowns which could be solved for in any individual solution due to computer limitations. Selected Doppler satellite tracking and astro-geodetic datum orientation stations were included in the various solutions. Based on these results and other related studies accomplished by the Committee, an a-value of 6378135 m and a flattening of 1/298.26 were adopted.

In the development of local-to WGS 72 datum shifts, results from different geodetic disciplines were investigated, analyzed and compared. Those shifts adopted were based primarily on a large number of Doppler TRANET and GEOCEIVER station coordinates which were available worldwide. These coordinates had been determined using the Doppler point positioning method.

WGS 84 reference frame. The oblateness of the ellipsoid is exaggerated in this image. 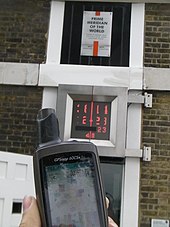 Handheld GPS receiver indicating the Greenwich meridian is 0.089 arcminutes (or 5.34 arcseconds) west to the WGS 84 datum

In the early 1980s, the need for a new world geodetic system was generally recognized by the geodetic community as well as within the US Department of Defense. WGS 72 no longer provided sufficient data, information, geographic coverage, or product accuracy for all then-current and anticipated applications. The means for producing a new WGS were available in the form of improved data, increased data coverage, new data types and improved techniques. GRS 80 parameters together with available Doppler, satellite laser ranging and very-long-baseline interferometry (VLBI) observations constituted significant new information. An outstanding new source of data had become available from satellite radar altimetry. Also available was an advanced least squares method called collocation that allowed for a consistent combination solution from different types of measurements all relative to the Earth's gravity field, measurements such as the geoid, gravity anomalies, deflections, and dynamic Doppler.

The WGS 84 originally used the GRS 80 reference ellipsoid, but has undergone some minor refinements in later editions since its initial publication. Most of these refinements are important for high-precision orbital calculations for satellites but have little practical effect on typical topographical uses. The following table lists the primary ellipsoid parameters. 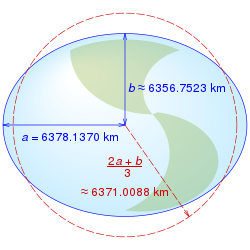 Equatorial (a), polar (b) and mean Earth radii as defined in the 1984 World Geodetic System revision (not to scale)

The very small difference in the flattening thus results in a tiny difference of 0.105 mm in the semi polar axis.

WGS 84 uses the IERS Reference Meridian as defined by the Bureau International de l'Heure,[6] which was defined by compilation of star observations in different countries.

The longitude positions on WGS 84 agree with those on the older North American Datum 1927 at roughly 85° longitude west, in the east-central United States.

All components of WGS84 are regularly updated. The Department of Defense World Geodetic System 1984, Its Definition and Relationships With Local Geodetic Systems document, initially published in 1984, has been revised in 1997, in 2004 (as three editions of the TR8350.2), and finally in 2014 as the first edition of NGA.STND.0036.[2] The regularly-updated documents provide refined descriptions of the Earth and realizations of the system for higher precision.

The geoid component of WGS84 is being continuously updated as a separate Earth Gravitational Model (EGM).[10]

This article incorporates public domain material from websites or documents of the National Geodetic Survey.