Arthur Honegger (French: [aʁtyʁ ɔnɛɡɛːʁ]; 10 March 1892 – 27 November 1955) was a Swiss composer, who was born in France and lived a large part of his life in Paris.[1] He was a member of Les Six. His most well known work is probably Antigone, composed between 1924 and 1927 to the French libretto by Jean Cocteau based on the tragedy Antigone by Sophocles. It premiered on 28 December 1927 at the Théâtre Royal de la Monnaie with sets designed by Pablo Picasso and costumes by Coco Chanel. However, his most frequently performed work is probably the orchestral work Pacific 231, which was inspired by the sound of a steam locomotive.[2] 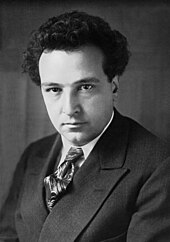 Born Oscar-Arthur Honegger (the first name was never used) to Swiss parents in Le Havre, France, he initially studied harmony and violin in Le Havre. After studying for two years at the Zurich Conservatory he enrolled in the Paris Conservatoire from 1911 to 1918, studying with both Charles-Marie Widor and Vincent d'Indy. He made his Paris compositional debut in 1916 and in 1918 wrote the ballet Le dit des jeux du monde, generally considered to be his first characteristic work. In 1926 he married Andrée Vaurabourg, a pianist and fellow student at the Paris Conservatoire, on the condition that they live in separate apartments because he required solitude for composing. Andrée lived with her mother, and Honegger visited them for lunch every day.[3] They lived apart for the duration of their marriage, with the exceptions of one year from 1935 to 1936 following Vaurabourg's injury in a car accident, and the last year of Honegger's life, when he was not well enough to live alone. They had one daughter, Pascale, born in 1932. Honegger also had a son, Jean-Claude (1926–2003), with the singer Claire Croiza.

In the early 1920s, Honegger shot to fame with his "dramatic psalm" Le Roi David (King David), which is still in the choral repertoire. Between World War I and World War II, Honegger was very prolific. He composed the music for Abel Gance's epic 1927 film, Napoléon, which was preceded by J'accuse (1919 film) and La Roue (The Wheel) (1923). He composed nine ballets and three vocal stage works, amongst other works. One of those stage works, Jeanne d'Arc au bûcher (1935), a "dramatic oratorio" (to words by Paul Claudel), is thought of[by whom?] as one of his finest works. In addition to his pieces written alone, he collaborated with Jacques Ibert on both an opera, L'Aiglon (1937), and an operetta. During this time period he also wrote Danse de la chèvre (1921), which has become a staple in the flute repertoire. Dedicated to René Le Roy and written for solo flute, this piece is lively and charming, but with the same directness of all Honegger's work[citation needed].

Honegger always remained in touch with Switzerland, his parents' country of origin, until the outbreak of the war and the invasion of the Nazis made it impossible for him to leave Paris. He joined the French Resistance and was generally unaffected by the Nazis themselves, who allowed him to continue his work without too much interference. He also taught composition at the École Normale de Musique de Paris, where his students included Yves Ramette. However, he was greatly depressed by the war. Between its outbreak and his death, he wrote his last four symphonies (numbers two to five) which are among the most powerful symphonic works of the 20th century. Of these, the second, for strings, featuring a solo trumpet which plays a chorale tune in the style of Bach in the final movement, and the third, subtitled Symphonie Liturgique with three movements that evoke the Requiem Mass (Dies irae, De profundis clamavi and Dona nobis pacem), are probably the best known. Written in 1946 just after the end of the war, it has parallels with Benjamin Britten's Sinfonia da Requiem of 1940. In contrast with this work is the lyrical, nostalgic Symphony No. 4, subtitled "Deliciae Basilienses" ("The Delights of Basel"), written as a tribute to days of relaxation spent in that Swiss city during the war.

Honegger was widely known as a train enthusiast, and once notably said: "I have always loved locomotives passionately. For me they are living creatures and I love them as others love women or horses." His "mouvement symphonique" Pacific 231 (a depiction of a steam locomotive) gained him early notoriety in 1923.

Many of Honegger's works were championed by his longtime friend Georges Tzipine, who conducted the premiere recordings of some of them (Cris du Monde oratorio, Nicolas de Flüe).[4]

In 1953 he wrote his last composition, A Christmas Cantata. After a protracted illness, he died at home in Paris of a heart attack on 27 November 1955 and was interred in the Saint-Vincent Cemetery in the Montmartre Quarter. He was given a state funeral by the French government, although he remained a Swiss national and never took French citizenship.[5]

The principal elements of Honegger's style are: Bachian counterpoint, driving rhythms, melodic amplitude, highly coloristic harmonies, an impressionistic use of orchestral sonorities, and a concern for formal architecture. His style is weightier and more solemn than that of his colleagues in Les Six. Far from reacting against German romanticism as the other members of Les Six did, Honegger's mature works show evidence of a distinct influence by it. Despite the differences in their styles, he and fellow Les Six member Darius Milhaud were close friends, having studied together at the Paris Conservatoire. Milhaud dedicated his fourth string quintet to Honegger's memory, while Francis Poulenc similarly dedicated his Clarinet Sonata.

Honegger was pictured on the Swiss twenty franc banknote (eighth series), issued October 1996 and replaced in 2017.

Honegger's symphonic movement Rugby was recorded with him conducting the Paris Symphony Orchestra in a 1929 electrical recording, which can be heard on YouTube.[6] Many of Honegger's recordings as conductor of his music have been reissued on CD by Pearl and Dutton.[7]

The ice hockey player Doug Honegger is his grandnephew.[8]