Kolwezi or Kolwesi is the capital city of Lualaba Province in the south of the Democratic Republic of the Congo, west of Likasi. It is home to an airport and a railway to Lubumbashi. Just outside of Kolwezi there is the static inverter plant of the HVDC Inga-Shaba.[4] The population is approximately 573,000.

Before the creation of Lualaba province in 2015 Kolwezi had two territories attached to it and the whole was known as the Kolwezi District.

Kolwezi is an important mining centre for copper and cobalt. There are also uranium, radium, oxide ores, and lime deposits. The Musonoi mine is a set of open-cut pits near Kolwezi from which copper and other metals have been extracted since the 1940s.[5] The nearby Lake Nzilo was created by damming the Lualaba River to provide a source of hydroelectric power and a reservoir of water for the mining activities.[6][7]

The settlement was created in 1938 to be the headquarters for the western mining group of the Union Minière du Haut Katanga. In 1971 it obtained city status and consisted of the communes of Dilala and Manika. In 1976 the territories of Lubudi and Mutshatsha, both previously part of Lualaba District, were attached to it to form the Kolwezi District (districts were called sub-regions at the time). In the 2015 repartitioning this was undone, the two territories and the city proper became separate parts of Lualaba province with the city as capital of the new province.[8][9][10]

On Saturday, 13 May 1978, ex – Katangese soldiers supported by Angola, occupied the city. The government of Zaire asked Belgium, France, Morocco and the United States to restore order. The 2e REP, an elite paratroopers unit of the French Foreign Legion, were sent in to drive out the rebels and rescue any hostages. The Belgian army also deployed a force of some 750 Paracommando Regiment paratroopers and moved out just over 1,800 Europeans to other cities in the region. 700 Africans, including 250 rebels,[11] 170 European hostages and 6 paratroopers died. 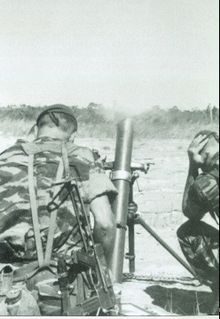 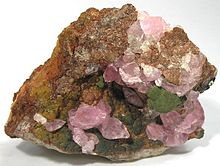 A specimen of Kolwezite (green), a rare copper-cobalt mineral named after Kolwezi,[13] and pink cobaltoan calcite.

The city is crossed by Transafrican Highway 9 (TAH 9), which connects it to the cities of Lubumbashi and Dilolo.

The city of Kolwezi has one of the main railway stations in Congo, from where mineral loads and passengers board every day. The station receives trains from the Benguela railway.

The Kolwezi Airport serves Kolwezi and the surrounding area. The airport is located about 6 km (4 mi) south of Kolwezi.[14]