Meissen (in German orthography: Meißen, IPA: [ˈmaɪsn̩]) is a town of approximately 30,000 about 25 km (16 mi) northwest of Dresden on both banks of the Elbe river in the Free State of Saxony, in eastern Germany. Meissen is the home of Meissen porcelain, the Albrechtsburg castle, the Gothic Meissen Cathedral and the Meissen Frauenkirche. The Große Kreisstadt is the capital of the Meissen district. 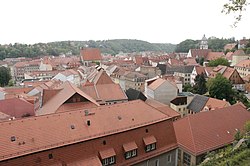 Meissen is sometimes known as the "cradle of Saxony". It grew out of the early West Slavic settlement of Misni inhabited by the Glomacze tribe and was founded as a German town by King Henry the Fowler in 929.[3] In 968, the Diocese of Meissen was founded, and Meissen became the episcopal see of a bishop. The Catholic bishopric was suppressed in 1581 after the diocese accepted the Protestant Reformation (1559), but re-created in 1921 with its seat first at Bautzen and now at the Katholische Hofkirche in Dresden.

In 965, the Margraviate of Meissen, a frontier march of the Holy Roman Empire, was founded, with Meissen as its capital. A market town by 1000, Meissen passed to the Duchy of Poland in 1002 under Boleslaw I the Brave, afterwards into hands of Henry II a few months later and to the House of Wettin in 1089. In 1015, Meissen was besieged by the Poles led by future King Mieszko II.

In 1241, the town was attacked in the Mongol raid on Meissen. The small Mongol force under Orda Khan defeated Meissens's defenders and much of the town was destroyed. The Mongols withdrew from Germany after the death of Ögedei Khan, sparing the region from further destruction.

The town was at the forefront of the Ostsiedlung, or intensive German settlement of the rural Slavic lands east of the Elbe, and its reception of town rights dates to 1332.

The construction of Meissen Cathedral was begun in 1260 on the same hill as the Albrechtsburg castle. The resulting lack of space led to the cathedral being one of the smallest cathedrals in Europe. The church is also known as being one of the purest examples of Gothic architecture.

In 1423, Meissen became capital of the Electorate of Saxony. In 1464, the capital was moved to Dresden.

In 1759, the Austrians defeated the Prussians at the Battle of Meissen.

During World War II, a subcamp of Flossenbürg concentration camp was located in Meissen.[4]

Meissen served as an important place of religious dialogue in 1988 when the agreement on mutual recognition between the German Evangelical Church (both East and West German) and the Church of England was signed in the town in 1988.

Porcelain bells at the Frauenkirche

Meissen is famous for the manufacture of porcelain, based on extensive local deposits of china clay (kaolin) and potter's clay (potter's earth). Meissen porcelain was the first high-quality porcelain to be produced outside of the Orient.

The first European porcelain was manufactured in Meissen in 1710, when by decree of King Augustus II the Strong the Royal-Polish and Electoral-Saxon Porcelain Factory (Königlich-Polnische und Kurfürstlich-Sächsische Porzellan-Manufaktur)[5] was opened in the Albrechtsburg. In 1861, it was moved to the Triebisch river valley of Meissen, where the porcelain factory can still be found today. Along with porcelain, other ceramics are also manufactured in the town. In the old town streets, there have been set up numerous porcelain stores, often selling antique Meissen porcelain and sometimes offering repair of broken porcelain. In Meissen and the sourrounding area, several former painters from the manufacture have set up porcelain painting workshops and galleries with their own pieces of porcelain art. 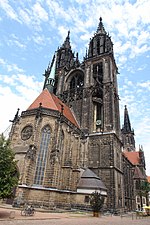 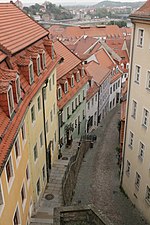 Hohlweg from the bridge to Meissen Castle

The Albrechtsburg, the former residence of the House of Wettin, is regarded as being the first castle to be used as a royal residence in the German-speaking world.[citation needed] Built between 1472 and 1525, it is a fine example of late Gothic style. It was redecorated in the 19th century with a range of murals depicting Saxon history. Today the castle is a museum. Nearby is the 13th-century Gothic Meissen Cathedral (Meißner Dom), whose chapel is one of the most famous burial places of the Wettin family. The hill on which the castle and the cathedral are built offers a view over the roofs of the old town.

Meissen's historical district is located mostly around the market at the foot of the castle hill. It contains many buildings of Renaissance architecture. Also imposing is the view from the 57-metre-high tower of the Frauenkirche (Church of Our Lady), situated in the old market-place. This church, not to be confused with the Dresden Frauenkirche, was first mentioned in a 1205 deed issued by Bishop Dietrich II and after a blaze about 1450 rebuilt in the Late Gothic style of a hall church. Its tower hosts the world's first porcelain carillon, manufactured in 1929 on the occasion of the town's 1000-years-jubilee. Another popular tourist sight is the world-famous Meissen porcelain factory.

From spring to autumn, several festivals take place in Meissen, such as the pottery market or the Weinfest, which celebrates the wine harvest. Meissen wine is produced at the vineyards in the river valley (Elbtal) around the town, part of the Saxonian wine region, one of the northernmost in Europe.

Also the Saxon Civil Servants Academy and the Academy of the Evangelical Church of Saxony are located in the town. 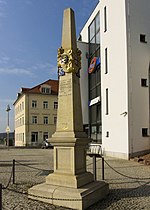 Worked in the town

Meissen is twinned with:[6]