For the cable and satellite conditional access system, developed by the Kudelski Group, see Nagravision. For the Indian village, see Nagra, Uttar Pradesh.

Nagra is a brand of portable audio recorders produced from 1951 in Switzerland. Beginning in 1997 a range of high-end equipment aimed at the audiophile community was introduced, and Nagra expanded the company’s product lines into a new marketplace. 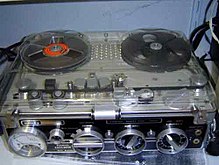 Originally a product of the Kudelski Group, Nagra recorders are now developed, produced and sold by independently-owned company Audio Technology Switzerland S.A., based in Romanel-sur-Lausanne.

The machines were initially designed by Polish inventor Stefan Kudelski,[1] and his company won numerous technical awards for their precision and reliability.[2] Nagra means "[it] will record" in Polish, Kudelski's mother language.

Nagra-brand tape recorders were the de facto standard sound recording systems for motion picture and (non-video) single-camera television production from the 1960s[3] until the 1990s.[1][4]

Originally, a physical sync lead tethered the Nagra recorder to the camera (putting a pulse from the camera onto the tape),[5] to ensure any fluctuations in the tape were accounted for. After the introduction of crystal sync, the tape recorder could operate separately from the camera, each having a separate accurate clock guaranteed to stay in sync with the other, allowing the sound recordist significantly more freedom of movement.[6] This was commonly known as double system sound.

Nagra recorders are identified by a number that indicates their technological generation and features:

from Zeist, The Netherlands, CC BY 2.0

In addition to these field recorders, Kudelski S.A. produced a studio recorder called the Nagra T-Audio, designed mainly for use in telecines for transferring dailies. All of the above machines use 1/4" tape.

Kudelski SA also produced a series of miniaturised reel-to-reel recorders using a special tape (width 3.81 millimetres (150 thou)), slightly larger than the conventional 1/8" cassette tape. These machines are referred to as SN (for Série Noire) and production was originally ordered by President Kennedy for the United States Secret Service.[9]

A special version of the SN using unique tape cassettes was made in cooperation with JBR Technology and widely used by US domestic intelligence agencies.

The Nagra IV-STC was the standard for film and classical music recording until the mid-1990s, when DAT recorders became reliable enough to use in the field. In response, Kudelski produced two digital recorders to compete: 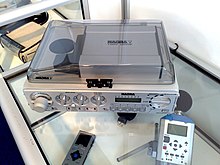 from Zeist, The Netherlands, CC BY 2.0

In 1997, Nagra launched the PL-P, a vacuum tube phono preamplifier, beginning a range of high-end audio equipment. The range is intended for audiophile consumers as opposed to exclusively the professional equipment manufactured hitherto.[10][11] Since then, the range has grown steadily and have added tubes and mosfet amplifiers, CD players, other pre-amps and DACs. Now divided into 2 Classic and HD lines, Nagra's products are acclaimed by many journalists as being among the world's best sound reproduction electronics.