For other uses, see Taifa (disambiguation).

The taifas (singular taifa, from Arabic: طائفة‎ ṭā'ifa, plural طوائف ṭawā'if, a party, band or faction) were the independent Muslim principalities of the Iberian Peninsula (modern Portugal and Spain), referred to by Muslims as al-Andalus, that emerged from the decline and fall of the Umayyad Caliphate of Córdoba between 1009 and 1031. They were a recurring feature of al-Andalus history. Conquered by the Almoravid dynasty in the late 11th century, on its collapse many taifas re-appeared only to be subsumed by the Almohad Caliphate. The fall of the latter resulted in a final flourishing of the taifas, but by the end of the 13th century only one remained, Granada, the rest being incorporated into the Christian states of the north.

The Arabic term mulūk al-ṭawāʾif, meaning "kings of the territorial divisions"[1] or "party kings",[2] was originally used for the regional rulers of the Parthian Empire. This period was treated as an interlude between Alexander's conquest of Persia and the formation of the Sasanian Empire. The negative portrayal of the Parthian period by Muslim historians may have been inherited from Sasanian propaganda. In the 11th century, Ṣāʿid al-Andalusī first applied the term to the regional rulers who appeared after the collapse of Umayyad power in Spain, "whose condition was like that of the mulūk al-ṭawāʾif of the Persians". The phrase implied cultural decline.[1]

The corresponding term in Spanish is reyes de taifas ("kings of taifas"), by way of which the Arabic term has entered English (and French) usage.[3]

The origins of the taifas must be sought in the administrative division of the Umayyad Caliphate of Córdoba, as well in the ethnic division of the elite of this state, divided among Arabs, Berbers, Iberian Muslims (known as Muladíes – a significant majority) and the Eastern European former slaves.

During the late 11th century the Christian rulers of the northern Iberian peninsula set out to retake the Christian lands that had been conquered by Muslims. The caliphate of Cordova, at this time among the richest and most powerful states in Europe, underwent civil war, known as fitna. As a result, it "broke into taifas, small rival emirates fighting among themselves".[4]

However, the political decline and chaos was not immediately followed by cultural decline. To the contrary, intense intellectual and literary activity grew in some of the larger taifas.

There was a second period when taifas arose, toward the middle of the 12th century, when the Almoravid rulers were in decline.

During the heyday of the taifas, in the 11th century and again in the mid 12th century, their emirs (rulers) competed among themselves, not only militarily but also for cultural prestige. They tried to recruit the most famous poets and artisans.

Reversing the trend of the Umayyad period, when the Christian kingdoms of the north often had to pay tribute to the Caliph, the disintegration of the Caliphate left the rival Muslim kingdoms much weaker than their Christian counterparts, particularly the Castilian–Leonese monarchy, and had to submit to them, paying tributes known as parias.

Due to their military weakness, taifa princes appealed for North African warriors to come fight Christian kings on two occasions. The Almoravid dynasty was invited after the fall of Toledo (1085), and the Almohad Caliphate after the fall of Lisbon (1147). These warriors did not in fact help the taifa emirs but rather annexed their lands to their own North African empires.

Taifas often hired Christian mercenaries to fight neighbouring realms (both Christian and Muslim). The most dynamic taifa, which conquered most of its neighbours before the Almoravid invasion, was Seville. Zaragoza was also very powerful and expansive, but inhibited by the neighbouring Christian states of the Pyrenees. Zaragoza, Toledo, and Badajoz had previously been the border military districts of the Caliphate. 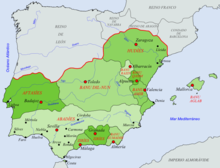 After the fall of the Caliphate of Cordoba in 1031 about 33 independent taifas emerged out the civil war and conflict in al-Andalus. The strongest and largest taifas in this first period (11th century) were the Taifa of Zaragoza, Taifa of Toledo, Taifa of Badajoz and the Taifa of Seville. The only taifa which conquered most of its weak neighbours was the Taifa of Seville under the Abbadid dynasty.

This region includes the Centro and Lisboa region of Portugal and Extremadura region of Spain.

This region includes the Alentejo and Algarve region of Portugal.

This region includes the Madrid region and the provinces of Toledo and Guadalajara of Spain.

This region includes the autonomous region of Andalucia in Spain

This region only includes the provinces of Teruel, Zaragoza and Tarragona of Spain.

This region includes the region of Valencia, Murcia and Baleares.

Additionally, but not usually considered taifas, are: