For other uses, see Bercy (disambiguation). 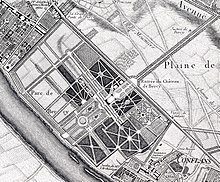 Bercy on a 1731 map of Paris and its environs

Drawing of the Château de Bercy

Some of the oldest vestiges of human occupation in Paris were found on the territory of Bercy, dating from the late Neolithic (between 4000 and 3800 BC).

The name of Bercy, or Bercix, appeared for the first time in property deeds in the twelfth century. The area belonged for a time to the Montmorency family before passing to the Malons family, who had an old manor house expanded by François Le Vau into the Château de Bercy.

In the eighteenth century, a large site located along the Seine, contiguous to the Paris city limits of the time, began to be used as a warehousing area, particularly for wine. For two hundred years, the area was the thriving centre of the Paris wine trade and a place with a unique life and culture.[1]

Aerial view of the neighborhood

The area features a number of well-known landmarks:

Line 14 of the Métro crosses the neighbourhood. There are two stations: Bercy and Cour Saint-Émilion