The shepherd's axe is a long thin light axe of Eurasian origin used in past centuries by shepherds in the Carpathian Mountains and in other territories which comprise today Slovakia, Czech Republic, Poland, Ukraine, Romania and Hungary.[1] The features of a shepherd's axe combine a tool with a walking stick, that could be used as a light weapon. It has symbolic historical and cultural connotations and is still used as a prop in many traditional dances, for example the odzemek. Among its precursors is a Hungarian battle axe called fokos. 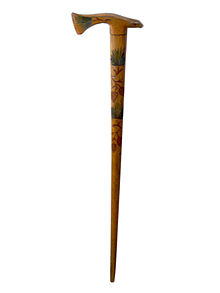 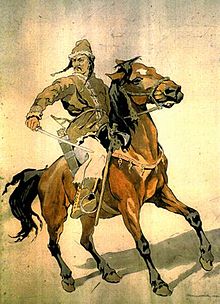 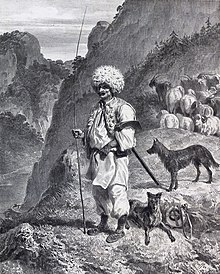 A shepherd's axe is a light axe with a long and straight wooden shaft, often with a metal butt. The length of the shaft is usually slightly more than 1 metre. The shafts were usually engraved as their owners had plenty of time for crafting.

Today's shepherd's axes are mostly decorative, some having golden or silver head-pieces (mostly brass, iron, chromed iron, wood or aluminum - it is rare that any axe head would be made of solid gold or silver). Many are considered works of art (esp. those made up to the 1960s by highlanders). They were skillfully stamped/adorned according to ancient tradition. The main motifs were the sun, stars (whirl), comets, tree of life, flowers, trees such as fir or spruce, and various geometric designs. Some smiths used many different, elaborated stamps.

In the 9th century, Magyar warriors used light axes on long shafts, called fokos, in their military arsenal during their invasion of Central Europe.[6] Apart from them, the Bulgars and also the Alans and Slavs used similar weapons[citation needed].

Vlach shepherds brought their shepherd's axes into Central Europe when they migrated along the Carpathian Mountains and Dinaric Mountains from the 14th through 17th centuries[citation needed][verification needed][7] These were used by shepherds as versatile tools, providing a small axe, a supplemental hammer and a walking stick. Although a shepherd's axe could not be used to effectively cut down heavy trees, it was still able to cut smaller branches.

In Slovakia and Poland, shepherd's axes were inseparable tools of native shepherds, together with heavy decorative belts. In the Slovak culture, the shepherd's axe was popularized by local historical legend Juraj Jánošík.

In Hungary, modified axes were also used as martial weapons by Hungarian warriors in the early modern period, used, for example, in the 18th century in Rákóczi's War for Independence against Austrian soldiers. In the 17th and 18th centuries, Hungarian Kuruc leader Imre Thököly and his soldiers used shepherd's axes as weapons. Hungarian shepherds in the northern regions used them also as tools.

Many people of the Halychyna region were depicted holding bartka, particularly members of the local peasant resistance of the 19th century known as opryshky, often being associated with their more prominent leader Oleksa Dovbush.

At present, shepherd's axes are still made and sold as souvenirs and for decorative purposes. They are also still used in many traditional dances. Occasionally they may be seen in the rural parts of the country where older men still use them as walking sticks. They are rarely used as tools or weapons.