listen); 19 August [O.S. 7 August] 1881 – 4 May 1955), known in France as Georges Enesco, was a Romanian musician. Enescu is regarded as one of the greatest musicians in Romanian history; he was a composer, violinist, pianist, conductor, and teacher.[1] He is featured on the Romanian five lei. 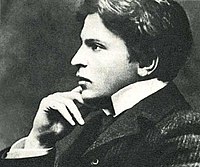 Enescu was born in Romania, in the village of Liveni (later renamed "George Enescu" in his honor), then in Dorohoi County, today Botoşani County. His father was Costache Enescu, a landholder, and his mother was Maria Enescu (née Cosmovici, the daughter of an Orthodox priest). He was their eighth child, born after all the previous siblings died in infancy. His father later separated from Maria Enescu and had another son with Maria Ferdinand-Suschi, the painter Dumitru Bâșcu.[2]

A child prodigy, Enescu began experimenting with composing at an early age. Several, mostly very short, pieces survive, all for violin and piano. The earliest work of significant length bears the title Pămînt românesc ("Romanian Land"), and is inscribed "opus for piano and violin by George Enescu, Romanian composer, aged five years and a quarter".[3] Shortly thereafter, his father presented him to the professor and composer Eduard Caudella. On 5 October 1888, at the age of seven, he became the youngest student ever admitted to the Vienna Conservatory,[4][5] where he studied with Joseph Hellmesberger Jr., Robert Fuchs, and Sigismund Bachrich. He was the second person ever admitted to this university by a dispensation of age (there was a regulation that stipulated that no person younger than 14 years could study at the Vienna Conservatory), after only Fritz Kreisler (in 1882, also at the age of seven), and the first non-Austrian.[6]

In 1891, the ten-year-old Enescu gave a private concert at the Court of Vienna, in the presence of Emperor Franz Joseph.[7]

Joseph Hellmesberger Sr., one of his teachers and the director of the Vienna Conservatory, hosted Enescu at his home,[when?] where the child prodigy met his idol, Johannes Brahms.[8]

He graduated at the age of 12, earning the silver medal. In his Viennese concerts young Enescu played works by Brahms, Sarasate and Mendelssohn. In 1895, he went to Paris to continue his studies. He studied violin with Martin Pierre Marsick, harmony with André Gedalge, and composition with Jules Massenet and Gabriel Fauré.[citation needed]

Enescu then studied from 1895 to 1899 at the Conservatoire de Paris. André Gedalge said that he was "the only one [among his students] who truly had ideas and spirit".[This quote needs a citation]

On 6 February 1898, at the age of 16, Enescu presented in Paris his first mature work, Poema Română, played by the Colonne Orchestra, then one of the most prestigious in the world, and conducted by Édouard Colonne.[9]

Many of Enescu's works were influenced by Romanian folk music, his most popular compositions being the two Romanian Rhapsodies (1901–02), the opera Œdipe (1936), and the suites for orchestra.[citation needed] He also wrote five symphonies (two of them unfinished), a symphonic poem Vox maris, and much chamber music (three sonatas for violin and piano, two for cello and piano, a piano trio, two string quartets and two piano quartets, a wind decet (French, "dixtuor"), an octet for strings, a piano quintet, and a chamber symphony for twelve solo instruments). A young Ravi Shankar recalled in the 1960s how Enescu, who had developed a deep interest in Oriental music, rehearsed with Shankar's brother Uday Shankar and his musicians. Around the same time, Enescu took the young Yehudi Menuhin to the Colonial Exhibition in Paris, where he introduced him to the Gamelan Orchestra from Indonesia.[10]

The Cantacuzino Palace on Calea Victoriei (Bucharest, Romania), built in the Beaux Arts style, which is now the George Enescu Museum

On 8 January 1923 he made his American debut as a conductor in a concert given by the Philadelphia Orchestra at Carnegie Hall in New York City, and subsequently visited the United States many times. It was in America, in the 1920s, that Enescu was first persuaded to make recordings as a violinist. He also appeared as a conductor with many American orchestras and, in 1936, was one of the candidates considered to replace Arturo Toscanini as permanent conductor of the New York Philharmonic.[11] In 1932, Enescu was elected a titular member of the Romanian Academy.[12] In 1935, he conducted the Orchestre Symphonique de Paris and Yehudi Menuhin (who had been his pupil for several years starting in 1927) in Mozart's Violin Concerto No. 3 in G major. He also conducted the New York Philharmonic between 1937 and 1938. In 1939, he married Maria Tescanu Rosetti (known as Princess Maruca Cantacuzino through her first husband Mihail Cantacuzino), a good friend of Queen Marie of Romania. While staying in Bucharest, Enescu lived in the Cantacuzino Palace on Calea Victoriei (now the George Enescu Museum, dedicated to his work).[citation needed]

He lived in Paris and in Romania, but after World War II and the Soviet occupation of Romania, he remained in Paris.[citation needed]

were among his pupils. See: List of music students by teacher: C to F#George Enescu.

On his death in 1955, George Enescu was interred in Père Lachaise Cemetery in Paris.

Today, Bucharest houses a museum in the Cantacuzino Palace in Bucharest in his memory; his house in Dorohoi is also open to the public; likewise, the Symphony Orchestra of Bucharest and the George Enescu Festival—founded by his friend, musical advocate, and sometime collaborator, the conductor George Georgescu[14]—are named and held in his honor. Recently, Bacău International Airport was named George Enescu International Airport.[15] 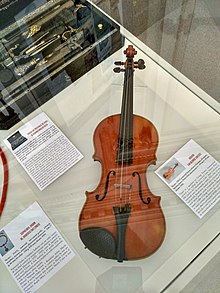 A violin owned by George Enescu in a museum in Bucharest, Romania

Pablo Casals described Enescu as "the greatest musical phenomenon since Mozart"[16] and "one of the greatest geniuses of modern music".[17] Queen Marie of Romania wrote in her memoirs that "in George Enescu was real gold".[18] Yehudi Menuhin, Enescu's most famous pupil, once said about his teacher: "He will remain for me the absoluteness through which I judge others", and "Enescu gave me the light that has guided my entire existence."[19] He also considered Enescu "the most extraordinary human being, the greatest musician and the most formative influence" he had ever experienced.[20] Vincent d'Indy claimed that if Beethoven's works were destroyed, they could be all reconstructed from memory by George Enescu.[21] Alfred Cortot, one of the greatest pianists of all time, once said that Enescu, though primarily a violinist, had better piano technique than his own.[22][23]

Enescu's only opera, Œdipe (Oedipe), was staged for the first time at the Royal Opera House in London in 2016, 80 years after its Paris premiere, in a production directed and designed by La Fura dels Baus which received superlative reviews in The Guardian,[24] The Independent,[25] The Times[26] and other publications. An analysis of Enescu's work and the reasons why it is less known in the UK was published by musician Dominic Saunders in The Guardian.[27]

Near Moinesti there is a mansion from Tescani, donated by Enescu's wife to the Romanian state, provided that a cultural centre be built there. In Liveni is the house where the composer grew up. There is a George Enescu memorial house in Sinaia (Villa Luminiş, Cumpatul neighborhood). In the mansion in Tescani, Bacău (the "Rosetti-Tescanu Cultural Center"), the Romanian state opened a creative center in the 80s, where literary works were composed (Jurnalul de la Tescani, Andrei Plesu) during annual painting and philosophy camps.

Enescu's maternal grandfather's house in Mihăileni, where Enescu spent part of his childhood, declined to an advanced state of deterioration by 2014. In August 2014 it was rescued from demolition by a team of volunteer architects. 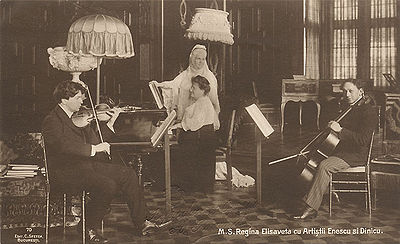 Queen Elisabeth of Romania with George Enescu and Dimitrie Dinicu
at Peleș Castle.