Between 1974 and 1976 it was non-tour event and between 1977 and 1986 it was a secondary tournament of the Grand Prix Tennis Tour but in 1987 it was upgraded to be part of the Grand Prix Super Series, the series of nine tournaments just below the four majors and the year-end finals in importance. It took the place of the Philadelphia Indoor event as the first Super Series event of the year. The event is one of two tour events (along with the Miami Open), other than the Majors, in which main draw play extends beyond eight days. The women's main draw usually starts on Wednesday and the men's main draw starts on Thursday. Both finals are held on Sunday of the following week. Both singles main draws include 96 players in a 128-player grid, with the 32 seeded players getting a bye (a free pass) to the second round.

The tournament is played on hardcourt and is the best-attended tennis tournament outside the four Grand Slam tournaments. It has the second-largest permanent tennis stadium in the world (the Arthur Ashe Stadium being the largest).

The tournament is played in the Indian Wells Tennis Garden (built in 2000) which has 29 tennis courts, including the 16,100-seat main stadium, which is the second largest tennis-specific stadium in the world.[2] After the 2013 BNP Paribas Open the Indian Wells Tennis Garden started an expansion and upgrade of its facilities that includes a new 8,000 seat Stadium 2.[3] The revamping of the tennis center also included a "Pro Purple" interior court color created specifically for the ATP Masters Series and first used at Indian Wells, citing the purple color being 180 degrees and exactly opposite the yellow of the ball.[4] 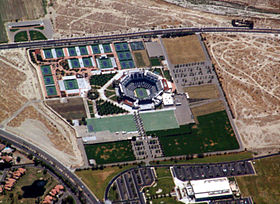 The tournament was founded by former tennis pros Charlie Pasarell and Raymond Moore.

The men's tournament was previously called

The women's tournament was previously called

Originally the women's tournament was held a week before the men's event. In 1996, the championship became one of the few fully combined events on both the Association of Tennis Professionals and Women's Tennis Association tours.

The BNP Paribas Open has become one of the largest events on both men's and women's tour. In 2004 it expanded to a multi-week 96 person field, and since then, it along with the following Miami Open, have been colloquially termed the Sunshine Double. Dubbed the "Grand Slam of the West",[5][6] it is the most-attended tennis tournament in the world other than the four Majors, with over 450,000 visitors during the 2015 event.[7]

In 2009, the tournament and the Indian Wells Tennis Garden were sold to Larry Ellison.[8][9]

On March 8, 2020, the tournament was postponed due to potential spreading of the COVID-19 virus.[10]

Venus and Serena Williams, two very successful American players, refused to play the Indian Wells tournament from 2001 to 2014 despite threats of financial sanctions and ranking point penalties. The two were scheduled to play in the 2001 semifinal but Venus withdrew due to an injury. Amid speculation of match fixing, the crowd for the final loudly booed Serena when she came out to play the final and continued to boo her intermittently through the entire match, even to the point of cheering unforced errors and double faults.[11] Williams won the tournament and was subsequently booed during the awards ceremony. The following month at the Ericsson Open, Richard Williams, Serena and Venus's father, claimed racial slurs were directed at him while in the stands.[12] Neither Venus nor Serena played the tournament until 2015, when Serena Williams played in the tournament, ending her 14-year boycott of the event.[13][14] Venus Williams ended her boycott by competing in 2016.[15]