In 2005, with Hendra Setiawan, he won the Asian Badminton Championships and the Indonesia Open. In 2006, the pair also won the Jakarta Satellite, the Hong Kong Open and the China Open after defeating Cai Yun and Fu Haifeng 21–16, 21–16 at the finals.

In 2007, Kido and Setiawan became World Champions after defeating Jung Jae-sung and Lee Yong-dae from South Korea, 21–19 and 21–19, at the World Championships finals in Kuala Lumpur, Malaysia. 2007 was a very big year for them. They also won the China Super Series after beating China's Guo Zhendong and Xie Zhongbo 21–12, 21–19 in the finals, and the World Cup after defeating Malaysia's Lin Woon Fui and Mohd Fairuzizuan Mohd Tazari 21–18, 21–15 in the finals at Yiyang, Hunan. They were runners-up at the China Masters Super Series, losing the final to China's Cai Yun and Fu Haifeng, 15–21, 16–21. In September, they won the Chinese Taipei Grand Prix Gold event. In December 2007, they won the Hong Kong Super Series, defeating the famous veterans Tony Gunawan and Candra Wijaya 21–12, 18–21, 21–13 in the finals. At the 2007 Southeast Asian Games in Thailand, they helped the Indonesian team win the gold medal in the men's team event, and won gold in men's doubles at the individual event after beating the Indonesian born pair Hendri Kurniawan Saputra and Hendra Wijaya who represented Singapore, 21–17 and 21–12.

In January 2008, they won the Malaysian Super Series. Later that year they teamed to capture their most prestigious prize, the Olympic gold medal in men's doubles at the 2008 Summer Olympics held in Beijing, China. They defeated the Chinese pair of Cai Yun and Fu Haifeng 12–21, 21–11, 21–16 in a thrilling match which more than avenged their loss to the same pair at the China Masters the previous summer.

In September 2009, Kido and Setiawan won the Japan Super Series after beating another Indonesian pair, Yonatan Suryatama Dasuki and Rian Sukmawan 21–19 and 24–22 in the final round. In October 2009, they won the French Super Series. On 17 December 2009, they defeated Malaysian duo Koo Kien Keat and Tan Boon Heong to win gold at the 2009 Southeast Asian Games in Vientiane, Laos.

They continued their domination to win the gold medal at the 2010 Asian Games in Guangzhou after beating Koo Kien Keat and Tan Boon Heong. They won all their round matches of the competition in 3 games as well. 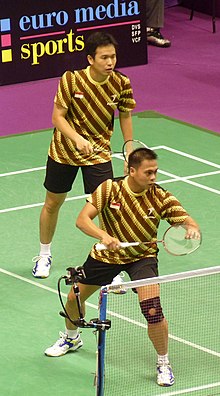 On 14 June 2021, Kido died from an apparent heart attack during a badminton friendly match.[1][2]

The BWF Superseries, which was launched on 14 December 2006 and implemented in 2007,[3] is a series of elite badminton tournaments, sanctioned by the Badminton World Federation (BWF). BWF Superseries levels are Superseries and Superseries Premier. A season of Superseries consists of twelve tournaments around the world that have been introduced since 2011.[4] Successful players are invited to the Superseries Finals, which are held at the end of each year.

(W) Won; (F) finalist; (SF) semifinalist; (QF) quarterfinalist; (#R) rounds 4, 3, 2, 1; (RR) round-robin stage; (Q#) qualification round; (A) absent; (G) gold, (S) silver or (B) bronze medal; (NH) not held; (N/A) not applicable.
To avoid confusion and double counting, these charts are updated at the conclusion of a tournament or when the player's participation has ended.