Rooma(Hindi:रूमा)(Urdu:روما) is a satellite town situated about 20 kilometres east of Kanpur, India and a major industrial and institutional centre on Kanpur–Allahabad Highway of National Highway 19.[1] Its one of the major towns enlisted in Kanpur metropolitan area.

There are many industries situated in the U.P.S.I.D.C. developing area. Many automotive showrooms are located on NH-2 National Highway 19. TECHNO INDIA is Service centre of Makita and Bosch power tools. Rooma has immense potential to be developed as major industrial city in Uttar Pradesh as the Eastern Dedicated Freight Corridor passes from here and Rooma has its own railway station on the corridor.

The Project has been set up on 173 acres of land on National Highway No.2 (Kanpur-Allahabad Section). Facilities like Training Centre, Fashion Design Centre, CETP, etc. for textile units in the area has been set up in the project.[2]

UPSIDC has developed a leather goods complex along with township at Rooma.[3]

UPSIDC has planned to develop a new industrial estate named as New Rooma Industrial Estate to give fuel to small scale industries.[4]

Rooma is soon to become a major IT hub in Uttar Pradesh. The construction of large Airport terminal by 2020 in its sister town Chakeri has resulted in immense potential of Rooma to be developed in IT and electronics centre in the near future. 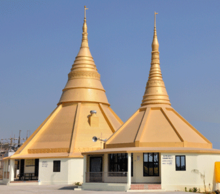 A meditation center situated at near Ema at Rooma

National Highway 19 (old number:NH 2) which connects Delhi with Dankuni near Kolkata passes from Rooma. Rooma has a bus stop near the highway and buses for major cities like Kanpur, Allahabad, Agra, Mathura, Faridabad, Jaipur etc. are easily available here. Kanpur Metropolitan Bus Service has bus routes from Rooma to different parts of Kanpur city and metropolitan area. Multinational cab companies like Ola and Uber have their services in Rooma.

Rooma (RXM) has a railway station on Delhi–Howrah main line but only passenger trains and Lichchavi Express halt here. There is a proposal to convert Rooma into terminal station as it is developing at very fast rate.[5] Sarsaul Railway Station which has some express/mail trains stoppage is 10 km from here and Kanpur Central Railway Station is 14 km from here.

Kanpur Airport is the nearest airport connected with major domestic destinations in India and is proposed to be an international airport in near future.