For other uses, see Telamon (disambiguation).

In Greek mythology, Telamon (/ˈtɛləmən/; Ancient Greek: Τελαμών, Telamōn means "broad strap") was the son of King Aeacus of Aegina, and Endeïs, a mountain nymph. The elder brother of Peleus, Telamon sailed alongside Jason as one of his Argonauts, and was present at the hunt for the Calydonian Boar. In the Iliad, he was the father of Greek heroes Ajax the Great and Teucer by different mothers. Some accounts mention a third son of his, Trambelus.[1][2] He and Peleus were also close friends of Heracles, assisting him on his expeditions against the Amazons and his assault on Troy (see below). 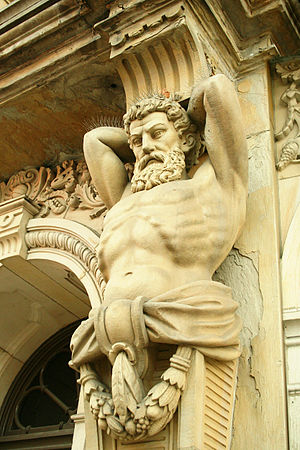 In an earlier account recorded by Pherecydes of Athens, Telamon and Peleus were not brothers, but friends.[citation needed] This would accord with Peleus being the father of the hero Achilles (Homer called him Pelides – i.e. son of Peleus). According to this account, Telamon was the son of Actaeus and Glauce, with the latter being the daughter of Cychreus, king of Salamis;[3] and Telamon married Periboea (Eriboea[4]), daughter of King Alcathous of Megara.

After killing their half-brother, Phocus, Telamon and Peleus fled Aegina. They made their way to the island of Salamis, where King Cychreus welcomed Telamon and befriended him. Telamon married Cychreus' daughter Periboea, who gave birth to Ajax; sometime later, Cychreus gave Telamon his kingdom. In other versions of the myth Cychreus' daughter is named Glauce, and Periboea is Telamon's second wife, and the daughter of Alcathous.

Telamon also features in both versions of Heracles’ sacking of Troy, which was ruled by King Laomedon (or Tros in the alternate versions). Before the Trojan War, Poseidon sent a sea monster to attack Troy.

In the King Tros version, Heracles (along with Telamon and Oicles) agreed to kill the monster if Tros would give him the horses he received from Zeus as compensation for Zeus’ kidnapping Tros’ son, Ganymede. Tros agreed; Heracles succeeded and Telamon married Hesione, Tros’ daughter, by whom he sired Teucer.

In the King Laomedon version, Laomedon planned on sacrificing his daughter Hesione to Poseidon in the hope of appeasing him. Heracles rescued her at the last minute and killed both the monster and Laomedon and Laomedon's sons, except for Ganymede, who was on Mount Olympus, and Podarces, who saved his own life by giving Heracles a golden veil Hesione had made. Telamon took Hesione as a war prize and married her, and she gave birth by him to Teucer. When Ajax later committed suicide at Troy, Telamon banished Teucer from Salamis for failing to bring his brother home.

In Apollodorus' Library, Telamon was almost killed during the siege of Troy. Telamon was the first one to break through the Trojan wall, which enraged Hercules as he was coveting that glory for himself. Hercules was about to cut him down with his sword when Telamon began to quickly assemble an altar out of nearby stones in honor of Hercules. Hercules was so pleased, after the sack of Troy he gave Telamon Hesione as a wife. Hesione requested that she be able to bring her brother Podarces with her. Hercules would not allow it unless Hesione bought Podarces as a slave. Hesione paid for her brother with a veil. Podarces’ name was then changed to Priam – which, according to Greek author Apollodorus, was derived from the Greek phrase “to buy”. 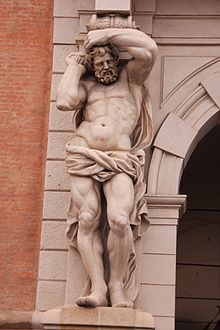 Telamon on left of entrance to Palazzo Davia Bargellini, Bologna

The Telamon (also Song of Telamon, Telamon Song, Telamon-song) is an ancient Greek song (fl. 5th century BCE) only found referred to by name in some ancient Greek plays[5] and later scholia or commentaries. It is usually thought to be a warlike song[6][7] about Telamon's son Ajax,[8] though some other commentaries thought it to be a mournful song about Telamon himself.[9] It began with: "Son of Telamon, warlike Ajax! They say you are the bravest of the Grecians who came to Troy, next to Achilles."[10]

In architecture, telamons are colossal male figures used as columns.[11] These are also called atlas, atlantes, or atlantids; they are the male versions of caryatids.