Willebrord Snellius[1][2] (born Willebrord Snel van Royen)[3] (13 June 1580[4] – 30 October 1626) was a Dutch astronomer and mathematician, known in the English-speaking world as Snell. In the west, especially the English speaking countries, his name is attached to the law of refraction of light (Snell's law).[5]

The lunar crater Snellius is named after Willebrord Snellius. The Royal Netherlands Navy has named three survey ships after Snellius, including a currently-serving vessel.

Willebrord Snellius was born in Leiden, Netherlands. In 1613 he succeeded his father, Rudolph Snel van Royen (1546–1613) as professor of mathematics at the University of Leiden.[6] 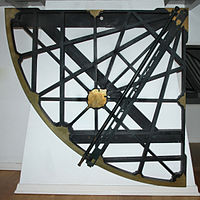 In 1615, Snellius, after the work of Eratosthenes in Ptolemaic Egypt in the 3rd century BC, probably was the first to try to do a large-scale experiment to measure the circumference of the earth using triangulation.[7][8] He was helped in his measurements by two of his students, the Austrian barons Erasmus and Casparus Sterrenberg. In several cities he also received support of friends among the city leaders (regenten). In his work The terrae Ambitus vera quantitate (1617) under the author's name ("The Dutch Eratosthenes") Snellius describes the methods he used. He came up with an estimate of 28,500 Rhineland rods – in modern units 107.37 km[9] for one degree of latitude. 360 times 107.37 then gives a circumference of the Earth of 38,653 km. The actual circumference is 40,075 kilometers, so Snellius underestimated the circumference of the earth by 3.5%.

Snellius came to his result by calculating the distances between a number of high points in the plain west and southwest of the Netherlands using triangulation. In order to carry out these measurements accurately Snellius had a large quadrant built, with which he could accurately measure angles in tenths of degrees. This quadrant can still be seen in the Museum Boerhaave in Leiden. In a network of fourteen cities a total of 53 triangulation measurements were made. In his calculations Snellius made use of a solution for what is now called the Snellius–Pothenot problem. 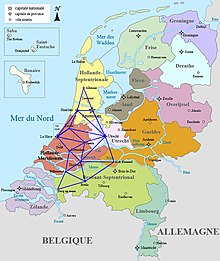 By necessity Snellius's high points were nearly all church spires. There were hardly any other tall buildings at that time in the west of the Netherlands. More or less ordered from north to south and/or in successive order of measuring, Snellius used a network of fourteen measure points: Alkmaar : St. Laurenskerk; Haarlem : Sint-Bavokerk; Leiden : a then new part (built in 1599) of the City walls;[10] The Hague : Sint-Jacobskerk; Amsterdam : Oude Kerk; Utrecht : Cathedral of Utrecht; Zaltbommel : Sint-Maartenskerk; Gouda : Sint Janskerk; Oudewater : Sint-Michaelskerk; Rotterdam : Sint-Laurenskerk; Dordrecht : Grote Kerk; Willemstad : Koepelkerk; Bergen-op-Zoom : Gertrudiskerk; Breda : Grote Kerk

Plaque on Snellius' house in Leiden

Snellius was also a distinguished mathematician, producing a new method for calculating π—the first such improvement since ancient times. He rediscovered the law of refraction in 1621.[13]

In addition to the Eratosthenes Batavus, he published Cyclometricus, de circuli dimensione (1621), and Tiphys Batavus (1624). He also edited Coeli et siderum in eo errantium observationes Hassiacae (1618), containing the astronomical observations of Landgrave William IV of Hesse. A work on trigonometry (Doctrina triangulorum) authored by Snellius was published a year after his death.[6]

Snellius died in Leiden on October 1626, at the age of 46 from an illness diagnosed as colic.[14] His grave can be seen in the Pieterskerk, Leiden.

Snellius Glacier in Antarctica is named after Willebrord Snellius.