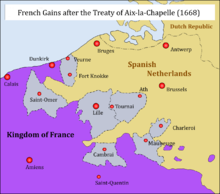 May 2: Treaty of Aix-la-Chapelle