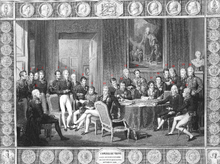 June 9: The Final Act of the Congress of Vienna is signed.