"BnF" and "Gallica" redirect here. For the compound abbreviated as "BnF", see Benzyl fluoride. For other uses, see Gallica (disambiguation).

The National Library of France traces its origin to the royal library founded at the Louvre Palace by Charles V in 1368. Charles had received a collection of manuscripts from his predecessor, John II, and transferred them to the Louvre from the Palais de la Cité. The first librarian of record was Claude Mallet, the king's valet de chambre, who made a sort of catalogue, Inventoire des Livres du Roy nostre Seigneur estans au Chastel du Louvre. Jean Blanchet made another list in 1380 and Jean de Bégue one in 1411 and another in 1424. Charles V was a patron of learning and encouraged the making and collection of books. It is known that he employed Nicholas Oresme, Raoul de Presle and others to transcribe ancient texts. At the death of Charles VI, this first collection was unilaterally bought by the English regent of France, the Duke of Bedford, who transferred it to England in 1424. It was apparently dispersed at his death in 1435.[3][4]

Charles VII did little to repair the loss of these books, but the invention of printing resulted in the starting of another collection in the Louvre inherited by Louis XI in 1461. Charles VIII seized a part of the collection of the kings of Aragon.[5] Louis XII, who had inherited the library at Blois, incorporated the latter into the Bibliothèque du Roi and further enriched it with the Gruthuyse collection and with plunder from Milan. Francis I transferred the collection in 1534 to Fontainebleau and merged it with his private library. During his reign, fine bindings became the craze and many of the books added by him and Henry II are masterpieces of the binder's art.[4]

Under librarianship of Amyot, the collection was transferred to Paris during which process many treasures were lost. Henry IV again moved it to the Collège de Clermont and in 1604 it was housed in the Rue de la Harpe. The appointment of Jacques Auguste de Thou as librarian initiated a period of development that made it the largest and richest collection of books in the world. He was succeeded by his son who was replaced, when executed for treason, by Jérôme Bignon, the first of a line of librarians of the same name. Under de Thou, the library was enriched by the collections of Queen Catherine de Medici. The library grew rapidly during the reigns of Louis XIII and Louis XIV, due in great part to the interest of the Minister of Finance, Colbert, an indefatigable collector of books.[4]

The quarters in the Rue de la Harpe becoming inadequate, the library was again moved, in 1666, to a more spacious house in Rue Vivienne. The minister Louvois took quite as much interest in the library as Colbert and during his administration a magnificent building to be erected in the Place Vendôme was planned. The death of Louvois, however, prevented the realization of this plan. Louvois employed Mabillon, Thévenot and others to procure books from every source. In 1688, a catalogue in eight volumes was compiled.[4]

The library opened to the public in 1692, under the administration of Abbé Louvois, Minister Louvois's son. Abbé Louvois was succeeded by Jean-Paul Bignon, who instituted a complete reform of the library's system. Catalogues were made which appeared from 1739 to 1753 in 11 volumes. The collections increased steadily by purchase and gift to the outbreak of the French Revolution, at which time it was in grave danger of partial or total destruction, but owing to the activities of Antoine-Augustin Renouard and Joseph Van Praet it suffered no injury.[4]

The library's collections swelled to over 300,000 volumes during the radical phase of the French Revolution when the private libraries of aristocrats and clergy were seized. After the establishment of the French First Republic in September 1792, "the Assembly declared the Bibliotheque du Roi to be national property and the institution was renamed the Bibliothèque Nationale. After four centuries of control by the Crown, this great library now became the property of the French people."[3]

A new administrative organization was established. Napoleon took great interest in the library and among other things issued an order that all books in provincial libraries not possessed by the Bibliothèque Nationale should be forwarded to it, subject to replacement by exchanges of equal value from the duplicate collections, making it possible, as Napoleon said, to find a copy of any book in France in the National Library. Napoleon furthermore increased the collections by spoil from his conquests. A considerable number of these books were restored after his downfall. During the period from 1800 to 1836, the library was virtually under the control of Joseph Van Praet. At his death it contained more than 650,000 printed books and some 80,000 manuscripts.[4]

Following a series of regime changes in France, it became the Imperial National Library and in 1868 was moved to newly constructed buildings on the Rue de Richelieu designed by Henri Labrouste. Upon Labrouste's death in 1875 the library was further expanded, including the grand staircase and the Oval Room, by academic architect Jean-Louis Pascal. In 1896, the library was still the largest repository of books in the world, although it has since been surpassed by other libraries for that title.[6] By 1920, the library's collection had grown to 4,050,000 volumes and 11,000 manuscripts.[4]

M. Henri Lemaître, a vice-president of the French Library Association and formerly librarian of the Bibliothèque Nationale ... outlined the story of French libraries and librarians during the German occupation, a record of destruction and racial discrimination. During 1940–1945, more than two million books were lost through the ravages of war, many of them forming the irreplaceable local collections in which France abounded. Many thousands of books, including complete libraries, were seized by the Germans. Yet French librarians stood firm against all threats, and continued to serve their readers to the best of their abilities. In their private lives and in their professional occupations they were in the van of the struggle against the Nazis, and many suffered imprisonment and death for their devotion. Despite Nazi opposition they maintained a supply of books to French prisoners of war. They continued to supply books on various proscribed lists to trustworthy readers; and when liberation came, they were ready with their plans for rehabilitation with the creation of new book centres for the French people on lines of the English county library system.[7]

On 14 July 1988, President François Mitterrand announced "the construction and the expansion of one of the largest and most modern libraries in the world, intended to cover all fields of knowledge, and designed to be accessible to all, using the most modern data transfer technologies, which could be consulted from a distance, and which would collaborate with other European libraries". Book and media logistics inside the whole library were planned with an automated 6.6 km (4.1 mi) Telelift system. Only with this high level of automation, the library can comply with all demands fully in time. Due to initial trade union opposition, a wireless network was fully installed only in August 2016.

In July 1989, the services of the architectural firm of Dominique Perrault were retained. The design was recognized with the European Union Prize for Contemporary Architecture in 1996. The construction was carried out by Bouygues.[8] Construction of the library ran into huge cost overruns and technical difficulties related to its high-rise design, so much so that it was referred to as the "TGB" or "Très Grande Bibliothèque" (i.e. "Very Large Library", a sarcastic allusion to France's successful high-speed rail system, the TGV).[9] After the move of the major collections from the Rue de Richelieu, the National Library of France was inaugurated on 15 December 1996.[10]

, the BnF contained roughly 14 million books at its four Parisian sites (Tolbiac, i.e. Bibliothèque François-Mitterrand, and Richelieu, Arsenal and Opéra) as well as printed documents, manuscripts, prints, photographs, maps and plans, scores, coins, medals, sound documents, video and multimedia documents, scenery elements..."[11] The library retains the use of the Rue de Richelieu complex for some of its collections. 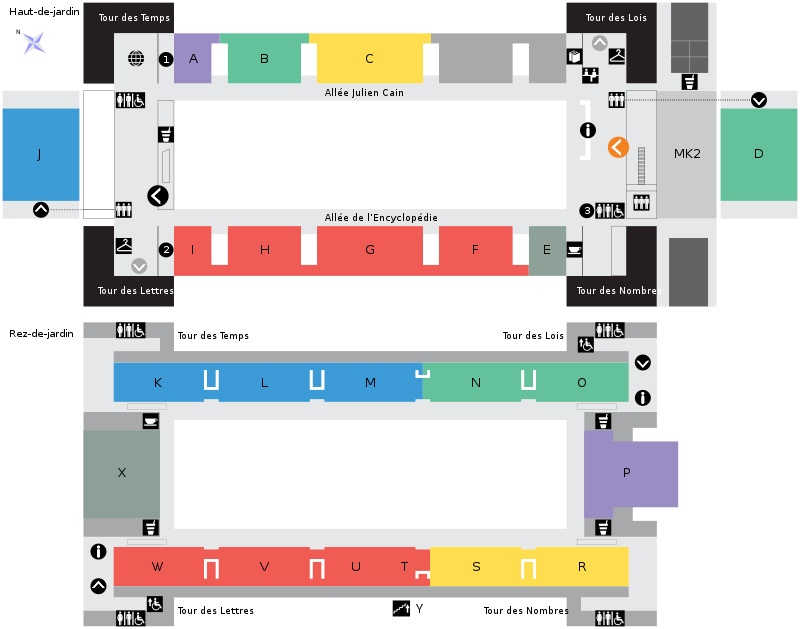 Plan of the Bibliothèque François-Mitterrand

The National Library of France is a public establishment under the supervision of the Ministry of Culture. Its mission is to constitute collections, especially the copies of works published in France that must, by law, be deposited there, conserve them, and make them available to the public. It produces a reference catalogue, cooperates with other national and international establishments, and participates in research programs.

Gallica is the digital library for online users of the Bibliothèque nationale de France and its partners. It was established in October 1997. Today it has more than 6 million digitized materials of various types: books, magazines, newspapers, photographs, cartoons, drawings, prints, posters, maps, manuscripts, antique coins, scores, theater costumes and sets, audio and video materials. All library materials are freely available.

On February 10, 2010, a digitized copy of Scenes of Bohemian Life by Henri Murger (1913) became Gallica's millionth document. And in February 2019, the five millionth document was a copy of the manuscript "Record of an Unsuccessful Trip to the West Indies" stored in the Bibliothèque Inguimbertine.

, Gallica had made available on the Web about:

Most of Gallica's collections have been converted into text format using optical character recognition (OCR-processing), which allows full-text search in the library materials.

Each document has a digital identifier, the so-called ARK (Archival Resource Key) of the National Library of France and is accompanied by a bibliographic description.

Films about the library

Raoul Rigault, leader during the Paris Commune, was known for habitually occupying the library and reading endless copies of the newspaper Le Père Duchesne.[12]