listen)) is a commune in the southeastern suburbs of Paris, France. It is located 6.2 km (3.9 mi) from the centre of Paris. It is one of the most densely populated municipalities in Europe. 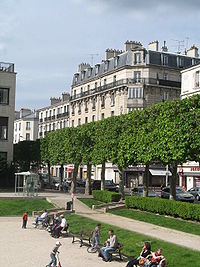 The Charenton Psychiatric Hospital is located in the neighbouring commune Charenton-Saint-Maurice, which changed its name in 1842 to Saint Maurice.

Charenton shares the association football club CA Paris-Charenton with nearby town Maisons-Alfort. They play in all red with blue shorts. They are a merger between CA Paris (founded in 1892), who won the 1920 Coupe de France, were second place in the 1928 Coupe de France, played in the first two seasons of Ligue 1, and then played in Ligue 2 until 1963, and SO Charentonnais (founded in 1904). The two merged in 1964. The club is chaired by Oscar Gonçalves. They mainly play at the Stade Henri Guérin in Charenton, but also play many matches at the Stade Charentonneau in Maisons-Alfort.

A Bronze Age hoard of weapons was found in the river Seine at Charenton in the late nineteenth century. Comprising swords, axes, spearheads and other miscellaneous objects, it is now in the British Museum.[2]

the commune has 14 public and private schools.[5]