For other uses, see Cupola (disambiguation).

In architecture, a cupola /ˈkjuːpələ/ is a relatively small, most often dome-like, tall structure on top of a building.[1] Often used to provide a lookout or to admit light and air, it usually crowns a larger roof or dome.[2][3] 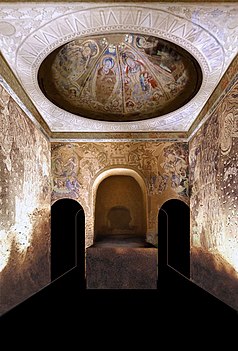 A cupola over a cella. "Cave with the Ring-Bearing Doves" (Cave 123) at the Kizil Caves, Xinjiang, China, 6th-7th century CE. Reconstitution in the Museum für Asiatische Kunst

The cupola evolved during the Renaissance from the older oculus. Being weatherproof, the cupola was better suited to the wetter climates of northern Europe.[citation needed] The chhatri, seen in Indian architecture, fits the definition of a cupola when it is used atop a larger structure.[citation needed]

Cupolas often serve as a belfry, belvedere, or roof lantern above a main roof. In other cases they may crown a spire, tower, or turret.[3] Barns often have cupolas for ventilation.[4][5]

Cupolas can also appear as small buildings in their own right.

The square, dome-like segment of a North American railroad train caboose that contains the second-level or "angel" seats is also called a cupola.[6][7]