listen);[2] German: Egisheim; Alsatian: Egsa) is a commune in the Haut-Rhin department in Grand Est in north-eastern France. It lies in the historical region of Alsace (German: Elsass). The village lies on the edge of the Ballons des Vosges Nature Park, where the Vosges meet the Upper Rhine Plain.

Eguisheim is about 7 kilometres (4 mi) from Colmar.

The vineyards around Eguisheim produce Alsace wine of high quality. The village is ranked in the top 20 of Les Plus Beaux Villages de France.[3] In May 2013 it was voted the 'Village préféré des Français' (Favorite French Village), an annual distinction that passes from town to town throughout France.[4]

Human presence in the area as early as the Paleolithic age is testified by archaeological excavations. Two parts from a human skull (from the frontal and parietal bones) were found in 1865 and given to Charles-Frédéric Faudel, a physician in nearby Colmar, who carefully described the find[5] and noted they were found undisturbed between animal bones, which allowed for a relative dating at a time when the very existence of prehistoric humans was still doubted.[6] The find became known in France in 1867 through Paul Broca,[7] and subsequently became a topic of discussion in the debate over what would become paleoanthropology.[6] Jean Louis Armand de Quatrefages de Bréau and Ernest Hamy, in their 1873 Crania ethnica, grouped Eguisheim and others with the finds at Neanderthal and Naulette, creating a "race of Canstadt" that was so flexible that almost all fossil remains of humans would fit.[8]

Gustav Schwalbe (who first published on the skull in 1897[9]), in a comparison with other skull fragments including those found in Spy, Belgium, concluded the skull was sufficiently different from Neanderthal skulls and approached the measurements of modern humans. One reviewer cast some doubt on Schwalbe's comparison and argued that only the cranial vault was substantially different from the others, but this, he said, could have been a normal variation from the mean within a group.[10] Later scholars seem to have accepted the identification of the skull as belonging to a Neanderthal,[11] though Schwalbe again, in 1902, insisted on the difference between the Eguisheim and Neanderthal skulls.[12] In 1904 Schwalbe proposed a species he called Homo primigenius for what at least one of his contemporaries called Home neandertalensis, and excluded the Eguisheim skull from that category.[13]

In early historic times it was inhabited by the Gaul tribe of the Senones; the Romans conquered the village and developed here the cultivation of wine.[citation needed]

In the early Middle Ages, the Dukes of Alsace built a castle here (11th century) around which the current settlement developed.

Eguisheim has a climate that is principally oceanic being influenced by the Atlantic Ocean, it is warm and temperate. It is rated as CfB on the Köppen-Geiger scale. Because Eguisheim is landinward temperatures in the summer regularly exceed 25 °C (77 °F). January is generally the coldest month, although the temperature occasionally drops below 0 °C, the average temperature is above freezing point. May and June are usually the wettest months of the year (there is rainfall almost every other day). June, July and August are the hottest months with the most sun. September is not extremely wet or hot, making it very suitable for the harvest of grapes.

Eguisheim has two areas which produce wine of exceptional quality, Eichberg (in English: Oak Mountain)[14] and Pfersigberg (in English: Peach Mountain),[15] characterised by the very hard Muschelkalk. Besides the usual-quality wines, Eguisheim produces Edelzwicker, Côte d'Eguisheim (a local high-end variety of Edelzwicker) and Gentil, all blends of the "noble" grapes grown locally. 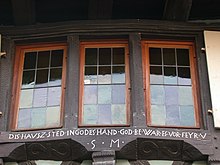 A window in Eguisheim with an inscription in Alsatian.

The area around Eguisheim is popular with hikers and cyclists. There are many marked trails. Popular destinations are Les Trois Châteaux (in Husseren-les-Châteaux) and Château de Hagueneck. A little further away are Château du Hohlandsbourg and Château de Pflixbourg, which can be reached on foot or by car.

The village is also a Village Cigogne d'Alsace (in Alsatian: Elsässisches Storckadorf), meaning that there are storks in the village. Eguisheim has a park dedicated to the white stork (Ciconia ciconia) which is freely accessible.

Eguisheim is twinned with

It has also friendship agreements with: