For the resort in St. Andrews, New Brunswick, see The Algonquin. 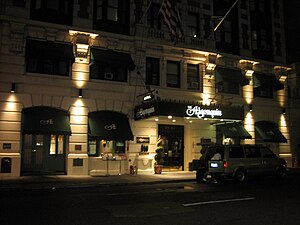 The Algonquin Hotel at night in Manhattan, New York

The 181-room hotel, opened in 1902, was designed by architect Goldwin Starrett. It was originally conceived as an apartment hotel but was quickly converted to a traditional lodging establishment. Its first owner-manager, Frank Case (who bought the hotel in 1927), established many of the hotel's traditions. It had a reputation for hosting numerous literary and theatrical notables, including the members of the Algonquin Round Table.

The Algonquin Hotel was originally designed as an apartment hotel, whose owner planned to rent rooms and suites on year-long leases.[1] When few leases sold, the owner decided to turn it into a hotel which he was originally going to name "The Puritan". Frank Case, upon discovering that Algonquian tribes had been the first residents of the area, persuaded the owner to christen it "The Algonquin" instead.[2][3]

The Algonquin's literary significance stems from its location for the eponymously named Algonquin Round Table; it's "a place where a lot of slang, phrases and attitudes were shaped."[4] The Algonquin was also "the first prominent hotel in the city that allowed women to stay there alone."[4][5]

Case took over the lease on the hotel in 1907[6] and bought the property on which the building sat in 1927 for $1 million.[7] Case remained owner and manager of the hotel until his death in June 1946. In October that year, the Algonquin was purchased by Ben Bodne of Charleston, South Carolina, for just over $1 million.[8] Bodne undertook an extensive restoration and renovation effort.[9] Bodne sold the hotel in 1987 to a group of Japanese investors and the Algonquin changed hands a number of times before ending up with Miller Global Properties in 2002. Following a two-year, $3 million renovation,[10] the hotel was sold again in 2005 to HEI Hospitality.[11]

HEI has affiliated it with Marriott International where it is part of Marriott's Autograph Collection brand.[12][13]

The Algonquin Round Table 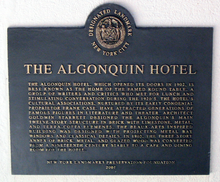 Since 2001 the Algonquin Hotel has been a New York City Designated Landmark.

At the end of World War I, Vanity Fair writers and Algonquin regulars Dorothy Parker, Robert Benchley, and Robert E. Sherwood started meeting for lunch at the Algonquin. Alexander Woollcott, acerbic critic and war correspondent, received a warm welcome from literary friends in 1919. They gathered in the Rose Room that afternoon; one person enjoyed the event enough to request that it become a daily event. That same request prompted a daily exchange of ideas and opinions shared between highly esteemed literary figures. George S. Kaufman, Heywood Broun, and Edna Ferber were also a part of this august assembly; these individuals influenced writers like F. Scott Fitzgerald and Ernest Hemingway. They founded The New Yorker magazine; all hotel guests receive free copies to this day.

Frank Case, owner of the hotel, ensured a daily luncheon for the talented group of young writers by treating them to free celery and popovers; more importantly, they were provided with their own table and waiter. Edna Ferber, Franklin P. Adams, George S. Kaufman, Heywood Broun, and Marc Connelly eventually joined the group, expanding its membership. All members were affiliated with the Algonquin Round Table, although they referred to themselves as the Vicious Circle.

Visitors often request to dine at the actual "round table" where members originally met for decades.

The Oak Room at the Algonquin was long one of New York City's premier cabaret nightclubs. Opened in 1939 (as the Oak Room Supper Club),[15] it was soon closed on account of World War II, reopened as a regular venue in 1980,[16] and closed for good in 2012.[17] (Before 1939, it had been called the Pergola Room and was the first meeting place of what became the Algonquin Round Table.)[18]

With its oak panels and other decor recalling an earlier time, the heyday of cabaret,[21] the Oak Room was small, intimate, and expensive (at least $100 per person, more if one had dinner, except for matinees),[24] and was not a big moneymaker for the Algonquin.[21] Part of the space occupied by the former Oak Room was used to enlarge the Blue Bar, the rest was converted into a private breakfast room for Marriott Reward Elite customers.[18]

The hotel has a tradition of keeping a cat that has the run of the hotel. The practice dates to the 1930s, when Frank Case took in a stray male cat that was originally named "Rusty". Legend has it that actor John Barrymore, who felt that the cat needed a more "dignified" name, suggested renaming Rusty "Hamlet". Nowadays, whenever the hotel has a cat, all the male cats are named "Hamlet" while all the female cats are named "Matilda". The last Algonquin cat, a Matilda, to gain notice was a Ragdoll that was named 2006 cat of the year at the Westchester (New York) Cat Show. Visitors could spot Matilda on her personal chaise longue in the lobby; she could also be found in her favorite places: behind the computer on the front desk, or lounging on a baggage cart. The doormen fed her and the general manager's executive assistant answered Matilda's email.[25] During 2011, Matilda was temporarily confined to an upper floor or to the limits of a leash tethered to the check-in desk, due to a directive from the city Department of Health.[26] From late 2011, Matilda was confined to the non-food areas of the lobby by an electronic pet fence.[27]

Matilda III died in October 2017. Since then, Hamlet VIII has taken up shelter at the hotel having been rescued from a cat colony on Long Island.

Although the Algonquin was "dry" even before Prohibition (Case closed the hotel bar in 1917[31] and had harsh words for those who ran speakeasies[32]), the hotel does have an eponymous cocktail, composed of rye whiskey, Noilly Prat and pineapple juice.[33] More recently, a newer drink has hit the Algonquin's menu, the $10,000 Martini[34] or "Martini on the Rock", consisting of a martini of the buyer's choice with a single piece of "ice", a diamond, at the bottom of the glass.[35] The martini was developed to mark completion of a major 29-day renovation that closed the hotel for the first time since its opening, which was overseen by Anthony Melchiorri, of Hotel Impossible.[34] Hoy Wong was a notable bartender at the hotel and was the oldest person to hold such a position in the state, serving at the Algonquin for 30 years until retiring in 2009, past the age of 90.[36]

In keeping with Frank Case's long-standing tradition of sending popovers and celery to the more impoverished members of the Round Table, the Algonquin offers lunch discounts to struggling writers.[10] Formerly, writers on tour could stay one night at the hotel free in exchange for an autographed copy of their book,[37] although the practice has been amended to include a discount on standard room rates.

The Algonquin Round Table, as well as the number of other literary and theatrical greats who lodged there, was one of the factors which led the New York City Landmarks Preservation Commission to designate the hotel as a city landmark in 1987.[38] In 1996 the hotel was designated a National Literary Landmark by the Friends of Libraries. The organization's bronze plaque is attached to the front of the hotel.[39]