ISO 3166-2:US is the entry for the United States in ISO 3166-2, part of the ISO 3166 standard published by the International Organization for Standardization (ISO), which defines codes for the names of the principal subdivisions (e.g., provinces or states) of all countries coded in I 3166-1.

Currently for the United States, ISO 3166-2 codes are defined for the following subdivisions:

Click on the button in the header to sort each column. 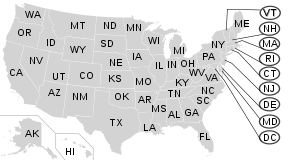 Map of the United States with each state and the District of Columbia labelled with the second part of its ISO 3166-2 code.

Besides being included as subdivisions of the United States in ISO 3166-2, the outlying areas are also officially assigned their own country codes in ISO 3166-1.