Immunoglobulin A (IgA, also referred to as sIgA in its secretory form) is an antibody that plays a crucial role in the immune function of mucous membranes. The amount of IgA produced in association with mucosal membranes is greater than all other types of antibody combined.[3] In absolute terms, between three and five grams are secreted into the intestinal lumen each day.[4] This represents up to 15% of total immunoglobulins produced throughout the body.[5] 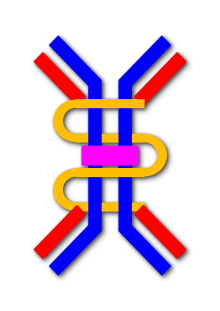 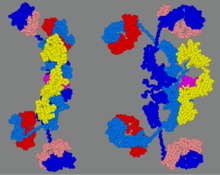 Two views, one rotated 90 degrees with respect to the other, of the amino acid chains comprising secretory IgA1. Colors are: H-chains (blue and light blue), L-chains (red and light red), J-chain (magenta) and the secretory component (yellow). Coordinates of each backbone carbon atom were derived PDB entry 3CHN 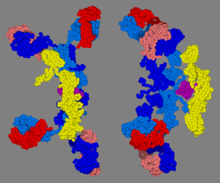 Two views, one rotated 90 degrees with respect to the other, of the amino acid chains comprising secretory IgA2. Colors are: H-chains (blue and light blue), L-chains (red and light red), J-chain (magenta) and the secretory component (yellow). Coordinates of each backbone carbon atom were derived PDB entry 3cm9

IgA has two subclasses (IgA1 and IgA2) and can be produced as a monomeric as well as a dimeric form. The IgA dimeric form is the most prevalent and is also called secretory IgA (sIgA). sIgA is the main immunoglobulin found in mucous secretions, including tears, saliva, sweat, colostrum and secretions from the genitourinary tract, gastrointestinal tract, prostate and respiratory epithelium. It is also found in small amounts in blood. The secretory component of sIgA protects the immunoglobulin from being degraded by proteolytic enzymes; thus, sIgA can survive in the harsh gastrointestinal tract environment and provide protection against microbes that multiply in body secretions.[6] sIgA can also inhibit inflammatory effects of other immunoglobulins.[7] IgA is a poor activator of the complement system, and opsonizes only weakly.

IgA exists in two isotypes, IgA1 and IgA2. They are both heavily glycosylated proteins.[8] While IgA1 predominates in serum (~80%), IgA2 percentages are higher in secretions than in serum (~35% in secretions);[9] the ratio of IgA1 and IgA2 secreting cells varies in the different lymphoid tissues of the human body:[10]

Both IgA1 and IgA2 have been found in external secretions like colostrum, maternal milk, tears and saliva, where IgA2 is more prominent than in the blood.[9] Polysaccharide antigens tend to induce more IgA2 than protein antigens.[10]

Both IgA1 and IgA2 can be in membrane-bound form.[12] (see B-cell receptor)

It is also possible to distinguish forms of IgA based upon their location – serum IgA vs. secretory IgA.

In secretory IgA, the form found in secretions, polymers of 2–4 IgA monomers are linked by two additional chains; as such, the molecular weight of slgA is 385,000D. One of these is the J chain (joining chain), which is a polypeptide of molecular mass 15kD, rich with cysteine and structurally completely different from other immunoglobulin chains. This chain is formed in the IgA-secreting cells.

The oligomeric forms of IgA in the external (mucosal) secretions also contain a polypeptide of a much larger molecular mass (70 kD) called the secretory component that is produced by epithelial cells. This molecule originates from the poly-Ig receptor (130 kD) that is responsible for the uptake and transcellular transport of oligomeric (but not monomeric) IgA across the epithelial cells and into secretions such as tears, saliva, sweat and gut fluid.

In the blood, IgA interacts with an Fc receptor called FcαRI (or CD89), which is expressed on immune effector cells, to initiate inflammatory reactions.[13] Ligation of FcαRI by IgA containing immune complexes causes antibody-dependent cell-mediated cytotoxicity (ADCC), degranulation of eosinophils and basophils, phagocytosis by monocytes, macrophages, and neutrophils, and triggering of respiratory burst activity by polymorphonuclear leukocytes.[13]

The high prevalence of IgA in mucosal areas is a result of a cooperation between plasma cells that produce polymeric IgA (pIgA), and mucosal epithelial cells that express polymeric immunoglobulin receptor (pIgR).[13] Polymeric IgA (mainly the secretory dimer) is produced by plasma cells in the lamina propria adjacent to mucosal surfaces. It binds to the pIgR on the basolateral surface of epithelial cells, and is taken up into the cell via endocytosis. The receptor-IgA complex passes through the cellular compartments before being secreted on the luminal surface of the epithelial cells, still attached to the receptor. Proteolysis of the receptor occurs, and the dimeric IgA molecule, along with a portion of the receptor known as the secretory component – known as sIgA, are free to diffuse throughout the lumen.[14] In the gut, IgA can bind to the mucus layer covering the epithelial cells. In this way, a barrier capable of neutralizing threats before they reach the epithelial cells is formed.

sIgA primarily acts by blockading epithelial receptors (e.g. by binding their ligands on pathogens), by sterically hindering attachment to epithelial cells, and by immune exclusion.[15] Immune exclusion is a process of agglutinating polyvalent antigens or pathogens by crosslinking them with antibody, trapping them in the mucus layer, and/or clearing them peristaltically. The oligosaccharide chains of the component of IgA can associate with the mucus layer that sits atop epithelial cells.[15] Since sIgA is a poor opsonin and activator of complement, simply binding a pathogen isn't necessarily enough to contain it—specific epitopes may have to be bound to sterically hinder access to the epithelium.[15]

Clearance of IgA is mediated at least in part by asialoglycoprotein receptors, which recognizes galactose-terminating IgA N-glycans.[8]

Decreased or absent IgA due to an inherited inability to produce IgA is termed selective IgA deficiency and can produce a clinically significant immunodeficiency.[16]

Anti-IgA antibodies, sometimes present in individuals with low or absent IgA, can result in serious anaphylactic reactions when transfused with blood products that incidentally contain IgA. However, most persons with suspected IgA anaphylactic reactions had experienced acute generalized reactions that were from causes other than anti-IgA transfusion.[17]

Neisseria species including Neisseria gonorrhoeae (which causes gonorrhea),[18] Streptococcus pneumoniae,[19] and Haemophilus influenzae type B[20] all release a protease that destroys IgA. Additionally, Blastocystis species have been shown to have several subtypes that generate cysteine and aspartic protease enzymes which degrade human IgA.[21]

IgA nephropathy is caused by IgA deposits in the kidneys. It is not yet known why IgA deposits occur in this chronic disease. Some theories suggest an abnormality of the immune system results in these deposits.[22]

Celiac disease involves IgA pathology due to the presence of IgA antiendomysial antibodies.[23][24]

Henoch–Schönlein purpura (HSP) is a systemic vasculitis caused by deposits of IgA and complement component 3 (C3) in small blood vessels. HSP occurs usually in small children and involves the skin and connective tissues, scrotum, joints, gastrointestinal tract and kidneys. It usually follows an upper respiratory infection and resolves within a couple weeks as the liver clears out the IgA aggregates.[25]

Vancomycin can induce a linear IgA bullous dermatosis in some patients.[27]