The intelligentsia (/ɪnˌtɛlɪˈdʒɛntsiə, -ˈɡɛnt-/)[1][2] (Latin: intelligentia, Polish: inteligencja, Russian: интеллигенция, tr. intyelligyentsiya, IPA: [ɪntʲɪlʲɪˈɡʲentsɨjə]) is a status class of educated people engaged in the complex mental labours that critique, guide, and lead in shaping the culture and politics of their society.[3] As a status class, the intelligentsia includes artists, teachers and academics, writers, and the literary hommes de lettres.[4][5] Individual members of the intelligentsia are known as intellectuals.

The concept of the intelligentsia status class arose in the late 18th century, in Russian-controlled Poland, during the age of Partitions (1772–95). In the 19th century, the Polish intellectual Bronisław Trentowski coined the term inteligencja (intellectuals) to identify and describe the educated and professionally active social stratum of the patriotic bourgeoisie who could be the cultural leaders of Poland, then under the control of the Russian Empire from the late 18th century to the early 20th century.[6]

In Russia, before the Bolshevik Revolution (1917), the term intelligentsiya described the status class of educated people whose cultural capital (schooling, education, enlightenment) allowed them to assume practical political leadership.[7] In practice, the status and social function of the intelligentsia varied by society. In Eastern Europe, intellectuals were deprived of political influence and access to the effective levers of economic development; the intelligentsia were at the functional periphery of their societies. In contrast, in Western Europe, especially in Germany and Great Britain, the Bildungsbürgertum (cultured bourgeoisie) and the British professions had defined roles as public intellectuals in their societies.[5]

The philosopher Karol Libelt identified the intelligentsia status class as associated with social progress, yet willing to work for the State. 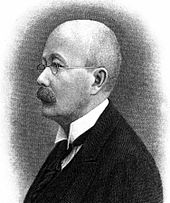 The Russian writer Pyotr Boborykin defined the intelligentsia as the managers of a society and as the creators of high culture.

In Europe the intelligentsia existed as a status class (social stratum) even before intelligentsia, the term, was coined in the 19th century. As people whose professions placed them (physically, economically, and socially) outside the traditional places and functions of the town-and-country monarchic social-classes (royalty, aristocracy, bourgeoisie) of the time, the intelligentsia were an urban social-class.[8] In their status class functions, the intellectuals had involvement with the cultural development of cities, the dissemination of printed knowledge (books, texts, newspapers), and the economic development of rental-housing (the tenement house) for the teacher, the journalist, and the civil servant.

In his 2008 work The Rise of the Intelligentsia, 1750–1831,[9] Maciej Janowski identified the intelligentsia as intellectual servants to the modern State, to the degree that their state-service policies decreased social backwardness and political repression in partitioned Poland.

The Polish philosopher Karol Libelt coined the term inteligencja in his publication of O miłości ojczyzny (On Love of the Fatherland) in 1844. In the Polish language, the popular understanding of the word inteligencja is close to Libelt's definition, which saw the inteligencja status-class as the well-educated people of society, who undertake to provide moral leadership, as scholars, teachers, lawyers, engineers, etc.; the intelligentsia "guide for the reason of their higher enlightenment."[8][failed verification][10]

In 2006, Dr Vitaly Tepikin identified the characteristics of the group [14] comprising the intelligentsia as follows: 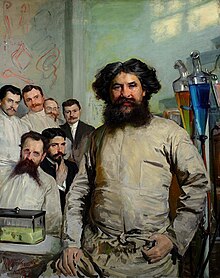 The surgeon Ludwik Rydygier and his assistants. (Portrait by Leon Wyczółkowski)

In 1844 Poland, the term inteligencja, identifying the intellectuals of society, first was used by the philosopher Karol Libelt, which he described as a status class of people characterised by intellect and Polish nationalism; qualities of mind, character, and spirit that made them natural leaders of the modern Polish nation. That the intelligentsia were aware of their social status and of their duties to society: Educating the youth with the nationalist objective to restore the Republic of Poland; preserving the Polish language; and love of the Fatherland.[5]

Nonetheless, the writers Stanisław Brzozowski and Tadeusz Boy-Żeleński[15] criticised Libelt's ideological and messianic representation of a Polish republic, because it originated from the social traditionalism and reactionary conservatism that pervade the culture of Poland, and so impede socio-economic progress. Consequent to the Imperial Prussian, Austrian, Swedish and Russian Partitions of Poland, the imposition of Tsarist cultural hegemony caused many of the political and cultural élites to participate in the Great Emigration (1831–70).[citation needed] 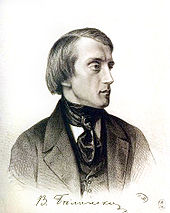 The Russian intelligentsiya also was a mixture of messianism and intellectual élitism, which the philosopher Isaiah Berlin described as follows: "The phenomenon, itself, with its historical and literally revolutionary consequences, is, I suppose, the largest, single Russian contribution to social change in the world. The concept of intelligentsia must not be confused with the notion of intellectuals. Its members thought of themselves as united, by something more than mere interest in ideas; they conceived themselves as being a dedicated order, almost a secular priesthood, devoted to the spreading of a specific attitude to life."[17]

The Idea of Progress, which originated in Western Europe during the Age of Enlightenment in the 18th century, became the principal concern of the intelligentsia by the mid-19th century; thus, progress social movements, such as the Narodniks, mostly consisted of intellectuals. The Russian philosopher Sergei Bulgakov said that the Russian intelligentsia was the creation of Peter, that they were the "window to Europe through which the Western air comes to us, vivifying and toxic at the same time." Moreover, Bulgakov also said that the literary critic of Westernization, Vissarion Belinsky was the spiritual father of the Russian intelligentsia.[18]

In 1860, there were 20,000 professionals in Russia and 85,000 by 1900. Originally composed of educated nobles, the intelligentsia became dominated by raznochintsy (classless people) after 1861. In 1833, 78.9 per cent of secondary-school students were children of nobles and bureaucrats, by 1885 they were 49.1 per cent of such students. The proportion of commoners increased from 19.0 to 43.8 per cent, and the remaining percentage were the children of priests.[19] In fear of an educated proletariat, Tsar Nicholas I limited the number of university students to 3,000 per year, yet there were 25,000 students, by 1894. Similarly the number of periodicals increased from 15 in 1855 to 140 periodical publications in 1885.[20] The "third element" were professionals hired by zemstva. By 1900, there were 47,000 of them, most were liberal radicals.[according to whom?]

Although Tsar Peter the Great introduced the Idea of Progress to Russia, by the 19th century, the Tsars did not recognize "progress" as a legitimate aim of the state, to the degree that Nicholas II said "How repulsive I find that word" and wished it removed from the Russian language.[21]

In the creation of post-monarchic Russia, Lenin was firmly critical of the class character of the intelligentsia, commending the growth of "the intellectual forces of the workers and the peasants" will depose the "bourgeoisie and their accomplices, intelligents, lackeys of capital who think that they are brain of the nation. In fact it is not brain, but dung". (На деле это не мозг, а говно)[22]

The Russian Revolution of 1917 divided the intelligentsia and the social classes of Tsarist Russia. Some Russians emigrated, the political reactionaries joined the right-wing White movement for counter-revolution, some became Bolsheviks, and some remained in Russia and participated in the political system of the USSR. In reorganizing Russian society, the Bolsheviks rid themselves, by fair and foul means, of class enemies, by way of deportation on Philosophers' ships, forced labor in the gulag, and summary execution. The members of the Tsarist-era intelligentsia who remained in Bolshevik Russia (the USSR) were proletarianized. Although the Bolsheviks recognized the managerial importance of the intelligentsia to the future of Soviet Russia, the bourgeois origin of this stratum gave reason for distrust of their ideological commitment to Marxist philosophy.

See also: Science and technology in the Soviet Union

Vladimir Putin has expressed his view on the social duty of intelligentsia in modern Russia.

We should all be aware of the fact that when revolutionary—not evolutionary—changes come, things can get even worse. The intelligentsia should be aware of this. And it is the intelligentsia specifically that should keep this in mind and prevent society from radical steps and revolutions of all kinds. We've had enough of it. We've seen so many revolutions and wars. We need decades of calm and harmonious development.[26]

Derived from the Polish cultural concept, the word intelligentsiya entered the languages of Europe; in English usage, "intelligentsia" identifies the intellectual status class in the countries of Central Europe (e.g. Poland) and Eastern Europe (e.g. Russia) in the 19th and 20th centuries. A narrower term 'intellectuals', according to Pierre Bourdieu, can be applied to those members of intelligentsia who not only work using their intellect, but also create cultural wealth.[citation needed] The emergence of elite classes of intellectuals or well-educated people had been observed in other European countries (e.g., intellectuels in France and Gebildete in Germany.)

In contemporary usage, the denotations and connotations of the term Intelligentsia include the intellectuals and the managerial middle-class whose professional and societal functions are the creation, distribution, and application of knowledge throughout society.[27]

The sociologist Max Weber defined the intelligentsia as a major social category (status class), which is essentially distinct, in their social function, political attributes, and national interests, from the other social categories of society. In Economy and Society: An Outline of Interpretive Sociology, Weber used the term intelligentsia in chronological and geographical frames of reference, such as "this Christian preoccupation with the formulation of dogmas was, in Antiquity, particularly influenced by the distinctive character of 'intelligentsia', which was the product of Greek education."[28]

In the 20th century, from the status class term Intelligentsia, sociologists derived the term mass intelligentsia to describe the populations of educated adults, with discretionary income, who pursue intellectual interests by way of book clubs and cultural associations, etc.[29] That sociological term was made popular usage by the writer Melvyn Bragg, who said that mass intelligentsia conceptually explains the popularity of book clubs and literary festivals that otherwise would have been of limited intellectual interests to most people from the middle class and from the working class.[30][31]

In the book Campus Power Struggle (1970), the sociologist Richard Flacks addressed the concept of mass intelligentsia:

What [Karl] Marx could not anticipate . . . was that the anti-bourgeois intellectuals of his day were the first representatives of what has become, in our time, a mass intelligentsia, a group possessing many of the cultural and political characteristics of a [social] class in Marx's sense. By intelligentsia I mean those [people] engaged vocationally in the production, distribution, interpretation, criticism, and inculcation of cultural values.[32]