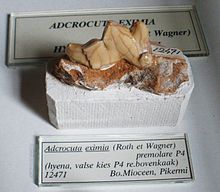 Wagner was a professor at the University of Munich, and curator of the Zoologische Staatssammlung (State Zoology Collection). He was the author of Die Geographische Verbreitung der Säugethiere Dargestellt (1844–46).

Wagner was a Christian creationist.[1]

In his travels to the fossil beds of Pikermi, Wagner discovered and described fossil remains of mastodon, Dinotherium, Hipparion, two species of giraffe, antelope and others.[2][3] His collaboration with Johannes Roth on these fossils became a major textbook in palaeontology, known as "Roth & Wagner", in which the "bones were much broken, and no complete skeleton was found with all the parts united".[4][5]

Wagner is commemorated in the scientific name of a species of South American snake, Diaphorolepis wagneri.[6]